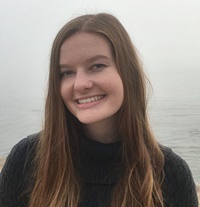 THE CRYING THRESHOLD
By Emma Fuhs

Annie stops crying when she reads an article about how the saddest people are too sad to cry.  It’s called The Crying Threshold.

Since Annie is far beyond the Crying Threshold, she looks up what other types of things sad people do and finds that there are lots of options. There are YouTube videos of sad people describing ways they cheer themselves up, like therapy animals or decaffeinated tea. But Annie scrolls past the videos because she doesn’t want to cheer herself with an adopted bunny or a Starbucks run. She needs this sadness.

After several hours of googling, she finds a site: beyondthecryingthreshold.com. It lists things that people who are beyond the Crying Threshold might do.

Annie gets a text from a woman named Gloria. She doesn’t Gloria know very well. They work together, but everyone who comes into the restaurant knows Gloria and no one knows Annie so they don’t talk much.

Usually Annie is excited to get a text and responds right away, but she can’t cover the shift Gloria needs covered. Besides, people who are beyond the Crying Threshold are unlikely to respond to texts.

Annie turns her phone facedown on the desk and closes her laptop. She sits next to the window and looks down at the street. There are three cars parked below, two Hondas and a Prius. The Prius is green like split pea soup, but the color doesn’t make Annie want to eat. People who are beyond the Crying Threshold sometimes don’t eat for days.

Cancer patients don’t eat either. During chemo they sometimes get a bad taste in their mouth or stop tasting altogether. Annie wonders if Sam got this way toward the end. She imagines herself at a CVS near the hospital in Dallas, picking out gum for him. She gets peppermint and cinnamon because she’s not sure which one is more potent. She gets a wine cooler for herself because the sadness is too much to deal with sober but throws it away with the receipt because Sam can’t drink. It’d be unfair to take the edge off without him.

People who are beyond the Crying Threshold drink and Sam isn’t alive anymore, so Annie mixes a screwdriver that’s mostly vodka. She toasts Sam’s lucky girlfriend, Jill, who gets about a million Facebook posts a day from people who know she’ll pull through a-ok because God has a plan.

Annie doubts that God has a plan. Or, if He does, she thinks He seems like a real asshole for screwing Sam with cancer of the pancreas at age 25. People who are beyond the Crying Threshold either blame God or think He’s a sham and for Annie, it’s a little bit of both.

Annie met Sam during their freshman year of college. She was new to Texas, a New Englander with parents who sent her south for school. They made sure she had a brand new wardrobe. Her mother couldn’t wait until Annie became the next in a long legacy of Chi Omegas.

Annie pretended to rush Chi Omega. She ordered sorority shirts online and learned the secret handshakes. She took selfies amongst crowds of girls in the dining commons and texted them to her mother, who was amazed at all of Annie’s new friends. It was the first time Annie felt close to her mother and she tried hard to pretend it was real.

Sam was in a fraternity and he wasn’t faking it like Annie. They lived in the same coed dorm, separated by a thin wall. It was before he started dating Jill, so almost every weekend Sam would bring a different girl back and they would fuck loudly and Annie would press her ear against the wall and pretend it was her. Whenever they passed each other in the hall she would look straight ahead. She would try to forget how he sounded when he orgasmed, even though she wondered if the face he made when it happened was the same as when stuffed crust pizza was on the menu at the dining commons.

Annie’s fondest memory of Sam happened sometime during the middle of the second semester. She was worried about midterms and spent a lot of time in the library, sometimes not returning to the dorm until two or three in the morning.

Sam was outside the dorm, parking his bike below a yellow streetlight. His hair was thick and dark and his fraternity letters stood out clear as a billboard. As Annie walked toward him, a plastic bag blew out from a bike basket and onto the ground. He took off after the bag, grabbing at it a few times before finally stomping it under a dirty white Converse. He picked it up and dropped it into the trash and there wasn’t anyone around to see it. Annie had never seen someone do something so good.

They never spoke that year and Annie never saw him again. She found out he died because people started posting pictures of him captioned RIP on Facebook.

Annie knows that no one will ever ask if she’s doing a-ok in the wake of Sam’s death. She knows that tragedy cannot strike so acutely when she only talks to the walls. But still, she will stay well past the Crying Threshold for a while. She will call in sick to work. Perhaps next week she will get tired of ignoring Gloria’s texts and respond. She’ll buy a potted plant. She’ll get over it.

Emma Fuhs is an undergraduate at UC Davis, majoring in English. Her work has appeared in Green Blotter, The Writing Disorder, and Moonglasses Magazine, amongst others.