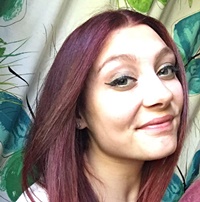 Flash! She hates taking family pictures. Especially the kind where your ice cold corpse sits in a coffin in a funeral home as the family poses for a picture out front. This was the only time they got together.

“I remember when you were this big” says Uncle Hank as he places his hand at his waist. She manages a chuckle and utters, “Yeah, it’s been a long time…” Her voice trails off, and she hopes he senses her disinterest.

Those were better days. Days when she still had you; a single teen mom who did the best she could and smoked a pack of cigarettes a day.

She doesn’t miss the sleepless nights filled with coughs that sounded as though chunks of your insides were splashing into the toilet bowl, but she does miss you. She misses the way that you were her best friend in the world.

If you were here, she’d bitch to you about the family and how sad it is that they only get together when someone dies. The irony being that you are now that someone, but this time is out of the ordinary. You weren’t some old, wrinkling relative who she knew only from the occasional holiday cards and tales of “the good ol’ days” when the family knew the meaning of “family”. You were young. This wasn’t right. She has more living to do, and god damnit you were supposed to be here for it; for her graduation from college that she only attended to please you, for her wedding to some man or woman who could fill the void that you’ve now left in her life, to see her scream in agony as she shoves an eight-pound person from between her legs.

You won’t be, though.

Flash! She hates taking family pictures. Especially the kind where you lay in a hospital bed for going on three weeks, an oxygen tank by your side and numerous tubes and needles invading your skin, pumping you with chemicals to counteract the other chemicals you’d been inhaling for decades.

She is thirteen years old and this was your first long stay at the hospital. She had found you passed out on the bathroom floor, little shimmering drops of crimson blood coming from the side of your mouth. You’d coughed yourself unconscious, but she was used to taking care of you. That’s what best friends do.

You finally leave the hospital six weeks later, after you are diagnosed with emphysema.

“I’ll stop smoking, I promise.” She believes you and holds your hand tightly, putting it up to her nostrils to inhale the smell of Marlboro cigarettes and Clinique perfume, scared that she may forget your scent.

By the sixth or seventh visit she has heard you say those words hundreds of times with varying levels of sincerity and reluctance. By the 13th or 14th, she is numb to them.

Flash! She hates taking family pictures. Especially the kind where you resemble an empty, bony shell of what used to be a person. This last trip to the hospital is different. You can’t pretend anymore – pretend that you are immortal and that the cancer sticks aren’t winning the fight for your life.

She sits gently on the side of your bed, careful not to touch you for fear of breaking your fragile, brittle bones. She looks at you, searching your sunken eyes for a glimpse of that oh-so-familiar heart ache and suffering. They are almost lifeless, sadness and despair replaced with exhaustion and defeat.

She tries to make you laugh, digging up happy memories from the thousands of tiny synapses firing in her brain as she processes the sight of her dying mother. The moments of joy that once brought light to your grey-blue eyes have lost their meaning as your organs work over-time to keep you alive.

As she gets in her car to leave the hospital that night, she wonders if that would be the last time she saw you. Memories of your fights about sneaking out, cell phones, boys, drinking, drugs—all a waste of your time together.The times she told you she hated you and you pretended that it didn’t break your heart. She wishes she could take it all back. She wishes you had more time.

Flash! She didn’t always hate taking family pictures. Not until they became a token of the loss of another member of her already scattered, estranged, distant family that she longed to keep from falling apart.

You died on a Tuesday. The funeral was a short three days later in your hometown of Pittsburgh, Pennsylvania.

She was a great woman.
She was the life of the party.
We will miss her dearly.
You look just like her.
She’ll always be with you.

She resents those words, intended to provide some faulty sense of comfort. They do nothing for her.

She is a spitting image of you. From your piercing blue eyes to your porcelain skin and thick curly locks. From your pig headedness to your intelligence. It made her sick. How could she look at herself in the mirror for the rest of her life and see your face staring back at her?

She’ll break a mirror or five. She’ll drink herself into oblivion one too many times. She’ll curse you, she’ll resent you, she’ll hate you for bringing her into a world that would one day force her to exist without you.

Someday, though, she’ll smile at the thought of you. Your face burned into her memory, she will no longer resent you for abandoning her, your daughter. She will speak of your memories fondly without blubbering every word. She will take your pictures out of that box she buried deep in the basement. She will finally take your clothes out of the closet and put them in plastic bags with pleasant thoughts of the poor people in America wearing them to stay warm or to get a job. She will marry that man or woman, and they will temporarily fill the void that you left in her life, but only a little. She will push that 7 pound 6-ounce human being from between her legs as she screams and wishes to take it back. She will do these things because she is her mother’s daughter.

Cassidy Senefelder is a recent graduate of St. John Fisher College with a Bachelor’s in English. She is an unpublished writer and plans to enjoy her new-found freedom from college life by exploring the creative writing she has been neglecting for the last four years.”