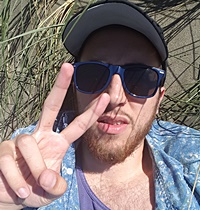 I have been in one real fist fight in my life.  I was in eighth grade at a classmate’s overnight birthday party.  We were all downstairs talking about girls and how we were all going to be bigshots in high school.  One boy came in from another room.  He had found two pairs of boxing gloves.  Testosterone began to swirl and we decided that we should have some matches.  Boys began to pair off in what they believed would be the most even fights.  I was paired with Harold Moran.  Harry and I never got along.  He would pick on me for being fat.  I would come back by telling him that he was dumb.  Neither of us were very original.

When it was our turn to fight, I did not know what to do.  I had never actually fought someone before.  I had been in some overly heated wrestling matches with my cousin Brandon, but those didn’t count.  They were just play-fights that got out of hand.

It was time for us to go.  I raised the gloves to my face like I had seen on TV.  Harold threw the first punch, landing his right fist on my ribs.  Normally, this is where I would have started to cry, but I didn’t.  It hurt, yes, but it woke me up.  It was like on Dragonball Z when Goku would be getting his ass kicked and he’d emerge from a pile of rubble laughing because somehow it had all made him stronger.  I started swinging.  Flailing really.  I was pummeling Harold’s arms and chest until he curled up in self-defense.  I was angry and it felt great.  I wanted to keep going.  To keep hitting Harold until I couldn’t move my arms.  I wanted him to know that he couldn’t beat me.  We were separated and I was declared the winner.

It’s been ten years since my one and only fight, and all I want to do is fight.  I want to channel my anger into someone’s flesh.  When I am at a family gathering for my dad’s family, I want one of my uncles to say the wrong thing.  I want them to say something about my brother being in jail so that my anger can start to flow.  They’ll say something about him deserving to be in there and my right fist will come flying in, landing across one of their cheeks.  If I’m lucky, I’ll get a few more in before chaos envelopes everyone and I’m being pulled away.

This will never happen, but I want it to.  I don’t know where my anger comes from, but I feel it inside me, buzzing right beneath my skin.  I often feel this way since Max was arrested.  I am angry for him.  I am angry with the justice system for holding an innocent man in jail.  I am angry that there is nothing I can do to help him.

My anger comes out when I am alone.  Something as simple as my cat having her shit stuck to her will set me off.  I know it’s coming and I can’t stop it.  My right fist shoots up, colliding with my head repeatedly.  I seethe.  I growl.  I clench my fists until I feel the veins in my neck.  For a split-second there is nothing.  The world stops and my muscles relax.  The euphoria sets in.  Tension recedes and is replaced with a light pins and needles sensation.

Being angry is just a drug.  It’s all one big fucked up high.  It’s just like in Fight Club.  There’s no better feeling than after you just got your ass kicked.  In that moment I feel free from everything.  It’s not like when I smoke pot where paranoia can sink in at any moment.  Nothing clouds my mind because I have just evicted everything that was in there.

I’m not proud of these moments.  I know it’s not healthy, but when the urge comes it’s almost impossible to repress.  My right fist has become my own personal refresh button, and my brain is addicted to pressing it.

A few years back, while I was in undergrad, I saw Harold at a house party in Sacramento.  I hadn’t seen him in years and I spent the whole party watching him.  Late in the night he was with a girl.  They were both drunk.  He was saying that she wasn’t strong enough to hurt him.  She disagreed.  She wanted to prove him wrong.  Confident, he obliged.  She leaned back and punched him in the face with a loud smack.  Half of his face was a new shade of red.  I could see in his eyes that same dazed feeling.  His mind was somewhere else.  Somewhere peaceful.

Connor Fitzpatrick is a graduate of the MFA in Creative Writing program at Saint Mary’s College of California. When Connor is not writing, he is obsessed with baseball and his cat, Toni.