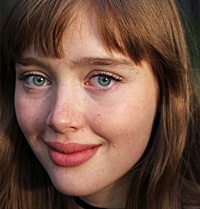 I slipped inside with nimble eyes and flapping pride and all at once
My spine was swallowed
My backbone mashed and mollified
Melting into slow solemn serenation
Scorching soft–fleshed girls and hard–hearted husbands
This must be Jazz nation.

I was inside
Close by– listening

That song, like this city, was alive.
It grabbed me by the throat and shook
Writhing in and raping me
I grew pregnant with plump pitch
Sharp tenor blare and double time detonation

And one unbuttoned blouse on a clementine- headed miss of perfect posture
who stuck out not like a sore thumb
but rather like a finger in the middle
Who undid it all with one cool look
Beady pearl eyes – dormant
That’s what it was
To be a New Yorker.

And it was
Dangerous to expose to a young person
like a loaded firearm
Or a bomb at 8:31 p.m.
A gross juxtaposition
A jazz club and a dumpster bombing
On the same night
On the next block
in my city?

God was a rhythm.
He sang bleached diatonic harmonies
Bent through juvenile voices
like a dimpled bell
Struck in a overgrown hospice chapel
Trite in unison
Blubbery tongues flailing at the prospect
of that almighty salvation
An eyeless mouthpiece
Blindfolded declaration

Hailing from the underpopulated and underrepresented state of Wyoming, Julianna Bjorksten recently completed her freshman year at New York University’s Gallatin School of Individualized study, where she is studying literature and creative writing. She is very excited to be allowed this opportunity to share her poems. This is her first published work.