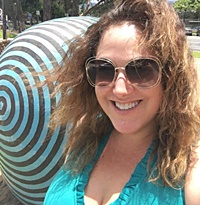 I’ve read the novel, Lolita at least three full times. The first of which, and I’m no longer afraid to admit this, 30 years after the fact, I could identify with Lolita, not necessarily the girl, but the narrative. I read Lolita, the first time, as a love story. I went so far as to sign teen age love letters to my own significant other as, “Lo.” Typed and written in pen all over sassy fashion magazine spreads with seductive poses in unusual places. The glossy pages of Vogue, Elle, and Harper’s Bazaar became personal high fashion stationary. My favorites were ridiculously ornate and imperial dresses worn in wild fields and treated with the disdain of a ranch hand. The more impractical and sultry the better. I even committed petty theft by stealing a House of Lo menu from a restaurant, just for the slight link to this namesake. This childish, heart-shaped view emanated from the hundreds of pages of objectification, through the eyes of Humbert Humbert and his class of “Dads, including the sophistication, cosmopolitanism, and any of those cute, vogue, French phrases that I could understand. I wanted to be the object of such a narrative.  Un triangle amoureux.  I don’t think this anymore. I hated Lolita for getting old: 17! I did not realize what I thought was a love story was also a control story and it had worked on me—for a while at least.

My graduate school writing sample was on, “How Lolita, the girl, becomes Lolita the text.” I rambled on those textual freeways of Nabokov’s Great American Novel with a sharp pencil as my brake. Like for so many other readers, the aesthetics bedazzled. I tried to tap into Nabovok’s magic by reading about his butterflies, Pale Fire, and digging deep into Russian history. I learned that Slavic once stood for slave. Nothing was as regal as it seemed, except for the Faberge eggs; however, I stood by the mighty artistry, identifying with the power of the words in the book, power by pen (or typewriter). When I used Lolita as reading material, while teaching an Introduction to Fiction course, some students, especially those whose lives overlapped with some of the unfortunate experiences shared with Lolita the character, made argument about Nabokov being an evil man. I would push those concerns off and ask them to focus on the superior art: to just ask more of Nabokov’s magic.

If you Google the two words, “Lolita Sunglasses,” you will find most results yield red heart-shaped glasses. (Although a glassware company has cleverly called its range of “dressed up” wine glasses, Lolita, to maximize “Lolita glasses” web searches. You will get those, too.) The heart-shaped sunglasses have become iconic, even though they never appear in the novel or Stanley Kubrick film, just the photo promoting the 1963 film. In the image, the young Lolita actress, Sue Lyon, peers over the heart-shaped glass, a red lollipop pressed to her red lips. The heart-shaped glasses form a cultural illusion of sorts, which brings me to a revealing comment in the Afterward of the novel, in which. Nabokov recalls the inspiration for Lolita: how an animal in a zoo’s first artistic expression is only the bars of its own cage.  A few literary historians have dug up some images from magazines of Nabokov’s and Kubrick’s time period that show photos of people gawking at animals in a cage—from the animal’s point of view. The bars of the cage fade behind girls, boys, men, and women, Americans staring through the cage and at the novelty.

If we were to imagine Lolita’s cage in Humbert Humbert’s torrid narrative about his passion for girls of a certain (under)age, it would consist of manipulations instead of iron. In one of the final scenes of the novel and film, which shows an older Lolita, no longer vibrant, she trades in her aesthetics for practicality. she wears a very practical set of glasses as she looks back at him: no longer with the rose, heart-shaped or cat’s eye glasses. These are very basic, far less fashionable glasses. They resemble the GI glasses, lovingly referred to as Birth Control Glasses, which are named for the lack of sex appeal given to those who wear them. This choice in eyewear could mark a step up in maturity in Lolita’s style, but it also shows consistency in being framed. Looking at this series of fashionable eyewear, heart-shaped, cat’s eye, and unstylish, it’s not too much of a jump to see the ever-changing shift of an encultured lens. In order to be wanted and visible, you wear the right fashion. To be seen, you shade something of yourself.

In a lamenting sonnet, after Lolita escapes him, Humbert poetically envisions his version of a Wanted Poster: Wanted Dolores Haze, giving her “Profession: “none” or ‘starlet’” (271). This is an ironic pair of job descriptions, in that it implies that you are the star of a scene in Dad’s movie or you are nothing. Yet, the belief that there is a film and performing in it might be more of a problem. So, in the fiction of Humbert’s love lens, in the literature, it’s a zero-sum game; Lolita is nothing or the subject and starlet of the word. Doomed to the life cycle of a star. but attached to the long tail of someone else’s supernova.

Another adaptation made In the Kubrick film, Lolita, was to leave out the news about Lolita dying in childbirth with daughter, which is sneakily previewed in the Foreword of the book (if you know her alias, Mrs. Richard F. Schiller). In Nabokov’s Lolita, Mrs. Richard F. Schiller is already dead before the adventure begins. So, Nabokov kills off the girl and her female heir, leaving the book as an artifact in her place. Kubrick leaves their demise out. While the novel closes the story of Lolita as a mother before it begins, Kubrick leaves that possible narrative open in his film. This is the electricity of hope in literature that I felt on Nabokov’s word highways and in Kubrick’s visual flyovers of those words—that anything can happen. The hope in creativity bringing light in even in the darkest circumstances, even on Hunter Road, upholds that in aesthetics, there is a freedom that one rarely finds in other places, which precludes asking anyone’s permission.

Recently there was a new monkey photo controversy. A macaque named Naruto took a selfie of himself in 2011 with the photographer David Slater’s camera. In Naruto’s image, the primate grins and stared directly into the lens, in a vivid self portrait. Slater holds a British copyright for the photo; however, in America, things run a bit differently. Despite legal appeals from PETA, the picture taken by a monkey cannot be copyrighted. Going back to Nabokov’s inspiration for Lolita as an animal drawing its own cage, in the days of digital photography, Naruto sees himself without a cage, unframed like Stanley Kubrick’s adaptation of Lolita and her daughter’s future. Naruto’s photo remains a lot like mother and daughter—in the public domain—where no one can ever own it.

Carrie Bailey is a college instructor from the Portland Metropolitan Area. Her latest creative projects include a book on parenting adult children and a novel that includes accompanying fragrances. Grounded: she is a Taurus and was born in the year of the boar. Lolita has been on her bookshelf since 1989.