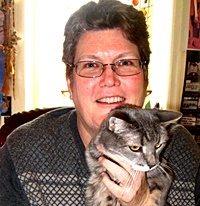 After dinner,  Nan and George refilled their wine glasses with a deep red Bordeaux and went to the sitting room where they waited for their spouses to join them.  George put a record on his new Victor Victrola.  It sat in the corner on its own end table. Its sound horn with its fluted edges resembled a large silver lily. The opening was turned toward the wall.

Nan stared at the fluted horn.

“I turned it to the wall so that the sound would echo through the apartment,” said George.

“That’s the point,” replied George.  “Stravinsky’s The Rite of Spring portrays the violence of the Russian pagan rites. A maiden dances herself to death in the sacrificial dance.  Stravinsky uses Russian folk music in the score.  He was sketched by Picasso, and Picasso undoubtedly influenced him.  They both discovered artistic primitivism at the same time — Picasso in his cubist painting and Stravinsky in his experimental music.”

Nan  cocked her head and listened to the strains of music amplified by the phonograph.   She imagined violin bows slicing air. She heard cubism in the music. The bass of kettle drums sounded.  She cocked her head so that one ear was turned to the sound horn as she listened intently to the high tones of the piccolo and flutes.

Despite what George had said, Nan didn’t care for the music.  She didn’t say so though — out of politeness to her teacher and friend.

Emma came in and joined them, sitting down on the burnt umber leather sofa next to her husband. Wilna was still missing.

She must be in the powder room, thought Nan.

“I hear that the piece started a riot in Paris when it debuted,” continued George.  “But that was because of the bad ballet dancing under the direction of Nijinsky.”

Nan nodded again.  She was relieved that Emma had lowered the sound. Nan could hear herself think.  She had heard about the riot in the theater in Paris.  The patrons undoubtedly had paid too high a ticket price for bad ballet dancing.

“John Singer Sargent did a portrait of Nijinsky,” said George.

George was always mentioning other artists that he knew.

“Maybe Nijinsky was one of John’s conquests,” chimed in Emma.  “We found out from friends in Europe that he was notorious.”

“Now Emma,” gently chided George.  “John’s personal life doesn’t really matter, even if he did conduct his professional life along the same lines as his personal life. May he rest in peace.”

“George means that John was a whore — and that he sold out.  That’s why he was so famous,” said Emma.

George chuckled. He couldn’t have said it better himself.  But his mother had told him to never speak ill of the departed.

He cleared his throat.  “To his credit, John was the first to use light to define form in his portraits.”
Emma was quiet.

Then she said, “Whatever you say dear. I say a whore’s a whore.”

Then there was an awkward silence. Nan was glad that Wilna wasn’t in the room.  Wilna would be uncomfortable and probably would interpret Emma and George’s conversation as a marital spat. But Nan smiled inwardly. Using bad language was uncharacteristic of Emma.  But she was defending George.  She was also defending the other Ash Can artists.  There was a reason the Ash Can artists didn’t get as much respect as painters such as Sargent who was considered the most important portrait artist of their time. He was known for the portraits of wealthy patrons who could pay his commissions.

“Is this Djuna Barnes in this photograph?” Wilna’s voice boomed from the hall.  If she was an opera singer, she’d be a mezzo soprano.

“Yes, that’s exactly right,” said George as he rose from the sofa.

Emma and Nan followed him into the hall.

Nan studied the portrait in front of her.

Djuna was wearing a shiny hat wrapped close to her head.  It made the top of her head look larger, and it accentuated her sad almond-shaped eyes. Her triangular nose led down to her deep shiny lips.  The photograph was black and white but, to Nan, Djuna’s lips looked deep red, so dark they were almost maroon.  She wore a dark cape around her with a high collar that came up past her ears.  The cape looked like it was out of a Dracula movie.

“Berenice Abbott, who I met through one of my students, is  an up and coming young photographer who lives in Paris.  She took the portrait,” said George.  “Berenice and Djuna used to live together here in the village and now they live in Paris, but separately.”

Nan looked at the photograph.  She wondered what it was like to live  in the Village with the bohemians. Or to live in Paris and be an artist.

“Nan and I would never live in the Village,” stated Wilna. “We prefer Bearsville  — give us the mountains and the fresh air any time. And, of course, we settled there because it’s so close to the arts colony in Woodstock.  But we do like the sea.  That’s why I just bought a another property in Carmel. We’re packing up and going there next month for the winter and coming back East in the Spring. While we’re in Carmel we are going to do nothing but our painting. We are going to be full-time artists.”

Wilna looked at the photograph dismissively.

“Of course, it’s art,” said George.  “Photography has been art for decades now. Look at Stieglitz.  Many of the Ash Can artists have been inspired by fine art photography and the documentary photography such as Lewis Hine produced of the exploited child laborers in this country early in the century.”

George pressed his lips together sternly and looked at Wilna as if she were a pupil who didn’t do her homework.

“Oh, I hear Carmel is beautiful,” exclaimed Emma.  “And it’s by the sea.  The perfect place for an artist.  I’m happy for you girls.”

Nan smiled at Emma. How like Emma to change the subject since Wilna and George appeared to be having a disagreement, thought Nan.

“Actually,” said Nan,  “we just bought a property in Carmel. Wilna bought the first one.  But we both own the new house — and it’s perfect for us!”

Nan realized that she was still stewing about Wilna’s earlier comment that she had just bought a house in Carmel.

Wilna looked at Nan and frowned.

George smiled.  Having Nan here made him feel like he was in the classroom.  He knew how to bring the focus back to his lecture.

“Bernice used to live in the Village with Djuna and the Hippolyte Havel, the anarchist who is friends with Emma Goldman.  He was going around saying that he had ‘adopted’ Berenice.  She left and moved to Paris.  I suspect the Village was too bohemian for her.  The ideas are brilliant — but an artist can’t work without regular hours.”

“That’s right, George. You are a fine example of an artist who does his artwork every day,” said Emma.  She radiated pride.

Nan noticed that Emma always spoke up for George when she could.  She hoped that she did this enough with Wilna. It was different with George and Emma, of course, since Emma wasn’t an artist. But the fact that Nan and Wilna were both artists was a tie between them, just like the fact that they were both farmers and now had a pair of goats.  Nan and Wilna were here because they had both had taken classes with George and he liked their paintings.  Of course, they thought the world of him.  Now Emma was part of their world.  She may not make art herself, but Nan could see how she was a part of George.

“We  just heard that Berenice has started working with an interesting French photographer — and elderly gentleman who used to be an actor and who toils in obscurity, documenting the old  Paris.  I’m sure we’ll hear more about him. He sounds like a true artist.”

“And speaking of pictures, it’s time now for our main event — the unveiling of George’s newest painting Nude With A Parrot, ” said Emma.

“It’s just my latest work,” said George modestly.  “I’m sure they’ll be others. But with what I have planned for us later tonight, I seriously doubt that this is the main event.”

He had a real treat in store for them.

“Nonsense,” said Emma.  “You’ve been working on that painting for years.  It’s time for a celebration. I’ll get the champagne.”

Janet Mason is an award-winning creative writer, teacher, and blogger for The Huffington Post. Her book, Tea Leaves, a memoir of mothers and daughters, published by Bella Books in 2012, was chosen by the American Library Association for its 2013 Over the Rainbow List.  Tea Leaves also received a Goldie Award. Janet’s short fiction has appeared in many literary journals including the Brooklyn Review, Sinister Wisdom, and Aaduna.  Her work has been nominated for a Pushcart Prize.