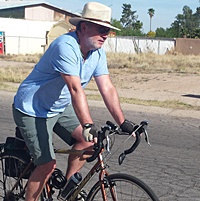 A BAG OF HANDS
By Mather Schneider

A BAG OF HANDS

Jalisco, Mexico. In a black plastic bag
they found them:

12 severed hands
removed from their owners, for thievery, por rateros,

and put in this bag, the kind of bag
you put beer in from Osco, filled with ice

but no ice for these hands, rancid, rotting
in the heat, flies, dried blood.

were different. Ugly, deformed. Self-loathing.
Most of all I envied dark smooth hands,

Indian hands. I thought
they were beautiful. And now 50

as a punishment
and a warning.

For 3 days I’ve been looking at these hands.
I think of that Sherwood Anderson story I read long ago

about the man whose hands got him into trouble
when he only wanted to love. That’s when

I wanted to be a writer. So many things to do
with these guilty hands, but writing seemed

a good thing. And people say:
you should take that bag

of hands and craft a novel around it, make
money, entertain people, quit this

I’ve stolen things. Hasn’t everybody?
One time when I was young I was too sick for school

and I was home alone, in bed,
and a man broke into our house

and came into my bedroom, looking for loot.
I woke up and said, “Who are you?” He ran

stomping up the stairs, I heard the door
slam and his truck tires throw gravel out

of our driveway. The police asked if I
could recognize the man and I drew a picture of him

and they used the picture to convict him. He lived
a few miles away. I drew a picture of him

with my hands and everybody
said I was a real good artist.

Nobody likes to have their house broken into.
Nobody wants to work hard for things

and then have someone come along and steal them.
I just hope

it was the right man.
Now I am old and have grown

into my old man’s hands, but I still don’t
like them, these hands on the steering wheel

of this taxi cab, arthritic, ticking.
I keep looking at everyone’s

hands now, my passengers’ hands.
Some of them have scars

don’t work well, they tremble.
Some of them are beautiful and smooth

the sunlight.
Imagine the hands

that held the thieves down, the hands that raised
the machete, the hands

that fell. Pretension
is a fog on the brain. The poets

hands of time, hands of God. A clock
without hands. Why

couldn’t that black plastic bag
have had a six pack of beer in it instead?

I remember when my wife first took my hand
walking in our old Tucson barrio.

My wife is Mexican
and she has lovely hands, hands that lifted

a barbed wire fence on the border, hands that turn
burgers to feed her father

back home. What would I not take
from this world to give to her? I ask myself

as I write these words with my numb hands.
Nothing? The truth is

I don’t know.
When you’re looking

at a black plastic bag full of severed hands
you don’t know what to think. Your mind stumbles

and claws at the air.

The Mexican hospital
is hot     a long thin tube of light

a skeleton buried within it     a ship
sits frozen

to his animal-skin shoes     the floor chewed
by the wheels

upstairs?     I’m dizzy and seasick
at the thought of my angel’s urine

trembles on the doctor’s table     Why are you nervous?
he asks her     it’s only Death

she could never have
cries and squeezes my hand

blowing out his birthday candles     the lights
go black     the blades

Mather Schneider was born in 1970 in Peoria, Illinois. He lived in Washington state for many years and now lives in Tucson. His poetry and prose have appeared in the small presses since 1994 in places such as River Styx, Nimrod, Hanging Loose, Pank and Rosebud. He has 4 full length books available on Amazon including the July 2017 release of Prickly by New York Quarterly Press. He recently won runner up in the 2017 Rattle poetry chapbook competition.