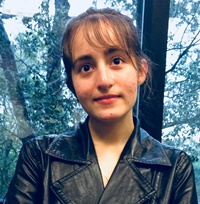 ORIGAMI AND SWEATERS
By Kennie Romero

Once upon a time
Year 1970, in a Mexican
village tucked in the folds
of corn and poppy fields,
abuelito threatened a witch
for putting incantations on abuelita
who laid in bed near oblivion’s curtain of the dead
because there was no more milk to sell to the witch.
In the house next to the village’s pharmacy, abuelito visited an herbalist
Herbs to put in abuelita’s porridge, abuelito put on a brave face he told papa, and confronted the witch. Now, in the US Atlantic Coast, say you’ll kill them papa tells me like your abuelito did. Converse politely about the witch’s hands and feet left on the ritual site, about the deformed chickens and pigs you’ve seen, and how you wouldn’t mind cutting off chicken heads and scalping a pig’s skin, the fun it would be. Fin.

Fold 5-inch square paper into flowers in the
school’s library. In between the creases of the
paper, read about

that day in autumn,
5 centuries and a half ago.
How I would have given
the 32, 000 sweaters
I don’t own, to Jews
in Lower Bavaria.
Protest to the duchy,
Liberate the ache in their bones
and warm it in front of firestones.

Now I know
it must have been cold,
Wonder if Jews
slept in the streets
and cover themselves
with dry leaves.

Kenia Romero currently resides in South Carolina, USA. Romero enjoys reading prose and poetry by minority writers, watching Mexican Golden Age of Cinema films, and painting in her spare time. She is a senior at South Carolina Governor school for the Arts and Humanities.