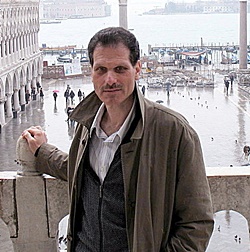 ALM: Tell us a bit about yourself, about Steven Pelcman, a poet, and how many poems you have written.

My parents emigrated to the USA after the WW2 and they didn’t know English so I spent a great deal of time alone as I tried to learn the language mostly because I didn’t speak English till I went to public school. Due to the lack of help at home I wound up not doing well but I spent a lot of time alone often reading the World Book Encyclopedia which nurtured my curiosity. This resulted in creating a great sense of self-discovery and a desire to do well in English and to put thoughts onto paper. Over time it also meant that I discovered the beauty of the language and so I started writing when I was around 11 or 12. Eventually it led me to enter a writing program at college where I studied with a Professor who taught me the power of an image, of sound and movement and an appreciation for the written word. It made me want to be a writer and after leaving New York for New Orleans and then later on to LA to try and get work in the tv and film industry all the while writing poetry. Everyone knows how much of “life” took place in the 1960s and 1970s and as full of conflict and challenges it may have presented to us, it was also a great time for creativity in film, music, poetry and so on. That inspired so many, me included.

As a matter of fact, I do. It was early on in public school and it was a poem titled, “A Gentle Rain” and the teacher of my class promised I would get it published if I changed the title to “The Gentle Rain” which I refused to do, ha, have stood my ground ever since.

ALM: Why do you write poetry? How about writing a prose?

Because I need to. There is something in a person’s heart and soul that says, “This is who and what I am.” I guess many never discover that but I did. I needed to live out my imagination and emotions and I sought answers to questions I didn’t even fully comprehend at that time. I write prose as well; short stories, film scripts, novels and like with the poetry I make every effort to get them published or sold as well.

The last poem written and published was a re-write of a poem I had worked on a while ago titled, A Small World, which is in my poetry collection, “like water to STONE” recently published by Adelaide Books. It was inspired by my mother or rather remembering a time with my mother. I envisioned her and I walking out into the garden and for whatever reason I felt the years that had passed, the sense of aging and the futures we all face and I showed some comparisons to nature, time and so on. For me it is a gentle, moving piece of remembering my mother when she was young and I guess when I was too. Popshot recently published the poem as well.

ALM: How long it did it take you to write your latest poem and how fast do you write?.

I often take notes about what I observe and feel and at times it takes a few hours but the initial writing may go fast but it is the editing process and repeating a poem aloud hundreds of times as I review it that takes time. I need to feel that every sense of the poem is in place, that there is logic and the beauty and is the story that I need to get onto the page before it is finished.

No, not really other than I rarely stop until I feel it is a finished product unless tiredness brings me to stopping before I am finished.

ALM: Is it poetry or writing the only form of artistic expression that you utilize, or there is more to Steven Pelcman than just poetry?

I love taking pictures and put a lot of creativity into that and the cover of “like water to STONE” is one of my photos. I believe the sense of image on the page is similar to what I try to capture with photography.

I enjoy the work of many poets but some of my favorites are Mary Oliver, James Dickey, Mark Strand, Some Sexton and Plath, William Carlos Williams, Roethke, Miller Williams and my Profs work, Dan Masterson to name a few.

I recently finished a novel that I think will fly and I am beginning work on a new short story.

ALM: In your opinion, what is the best way when it comes to promoting poetry? Did you ever think about the profile of your readers? What do you think – who reads Steven Pelcman?

The best way to promote poetry is to read it; give readings, watch videos because poetry is often captivating when read aloud by a good reader but of course in today’s world all marketing promotion is online, via podcasts and so on. I do think of the readers but I write on what I think
works for me, what moves me and I hope the reader will feel and think and see what I do. As to who reads my work; I hope anyone that cares about a story. No one loves everything written by anyone but I do hope there are some pieces that matter and make people enjoy the work.

It may sound corny but for me I would say, believe in your heart and intellect, believe in how you feel when you observe or experience something or when you listen to the experiences of others and out it onto paper or of course, a word page and write. Write and never give up till you are satisfied. Learning the technical aspects comes later and learning the pain of revision, the time and the dedication comes to us all, if you truly want to write. Never give up if writing is who you are.

Coming out of one of my first workshops having brought a poem of about 50 lines and being told that, “You have got 3 great lines to work with”, was devastating and funny at the same time. The best advice is to listen to your heart. If it tells you to go on then go on.

I’m presently reading SPQR A History of Ancient Rome by Mary Beard and Death of The Poets By Paul Farley and Michael Symmons Roberts.

Some of my favorite poets are the same ones that influenced me but other than poetry I am a Lincoln admirer and so some of my favorite books are on Lincoln: Gore Vidal’s, Lincoln, Team of Rivals by Doris Kearns Goodwin, Lincoln’s Boys by Joshua Zeitz or some great bios such as Boswell’s The Life of Samuel Johnson, The Education of Henry Adams by Adams, and many historical novels and work by Robert Harris, Joseph Ellis or David McCullough and I love a good western so I read up on the old west; Custer and Earp and so on. I love history and Rome or Egypt, USA; France and so on have such great histories so I enjoy those a lot.

The image is central to my work and my work must tell a story, one full of thought and emotion, observation and realism and the desire to often make what is hard or cruel or rough, gentle and still see all sides to the moment.

ALM: What is next after “like water to STONE.” Are we going to see something new on the bookshelves by Steven Pelcman?

In today’s publishing world not everything published goes to bookshelves but I believe so, a modern western novel put out by Outlaws Publishing seems to be on the horizon.

Since the beginning of time mankind has created, experimented, investigated, explored, lived and died and time has passed and the world undergoes change all the time yet some things remain constant: creators of the written word and what those words must offer outlive everything. We can read what Cicero experienced in Rome, what Lincoln felt about slavery, how Anne Sexton thought about her father and it is for the writer to record the history of time, the pain of men’s souls, the lust and happiness, the bitterness of war and the desire for freedom which cries out onto the pages of the author, the poet, the novelist, the historian, the song writer, the educator, the shopkeeper or the waitress, the dentist, the tech writer or copywriter or the University Professor; we all have one thing we share; to write about who and what we are and were. It’s the main way to remember we were alive.

ALM: Thank you, Steven. Good luck with your future projects.