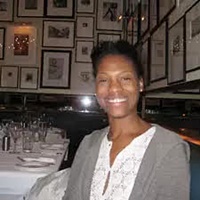 THE HUNTED
By Tinka Harvard

Daniel lifted his head from Thieme’s Atlas of Anatomy and slid his glasses off, turning his ear toward the door. Being inside warm and cozy during rain storms was one of his favorite things to do. He wondered, Is that the doorbell? Who would be out in this rain?

His grandmother constantly reminds him that he spends too much time inside. “Go out some time,” she tells him. “You gotta work hard and play hard in this life,” was one of her mantras.

But today would not be ideal. At the sound of the doorbell he wondered, What fool would dare to wander out in this rain?

He walked over to the door and opened it, and there she was.

It was a shock really, a terrible shock to see her standing there in the rain with a gash on her head and blood streaming down her face. The first thing he thought was, That’s a nasty cut—it may need some stitches.

She was soaking wet, her clothes all soaked through. It was as if she were dressed in a kind of cling wrap the way her clothes clung to every inch of her body, every curve and contour. Daniel could see right through her sheer white top to her breast; her nipples were enormously round and erect. Daniel thought, She’s exquisite.

“You deaf?” Nana interrupted his thoughts. “Who is it?” His grandmother appeared at his side, ducked under his arm that was holding on to the frame of the door, and spotted the wet and bleeding stranger.

“Girl, you done lost your mind! Get in here!” Nana yelled while pulling the nearly naked young woman in from the freezing rain.

There weren’t many things that made Nana nervous, not after all her years in nursing and all the living she’d done. She’d seen distraught young women quietly trying to hold back their sobbing. She’d tended to women in torn clothes and even some who have been soaked to the bone in rain water. But this stranger who showed up on her doorstep in tears and ripped clothing and with bare feet cut up and bleeding in the rain storm shook her.

Daniel knew his grandmother all too well. He could hear the fear in her voice despite her tough talk as he got through to the emergency operator.

Nana lead the girl to the sofa, reached for a cashmere throw, and wrapped her in it. “Daniel!” she shouted. “What’s wrong with you? Get me some towels! You the medicine man. Why I got to tell you everything?” Medicine Man is Nana’s nick name for him, which masks her pride of her grandson who recently began medical school.

“Girl, what has happened?” Nana spoke to the wet creature softly all along looking into her eyes.
The young lady began to speak but was interrupted when Daniel returned with the towels. Nana realized that she had better get the girl into some warm, dry clothes. “I’m gonna get you outta these wet things. That alright with you?”

The young lady, between shivers and chattering teeth, nodded yes.

She managed to chatter out, “Jeannie.”

“Well come on Jeannie, let’s get you out of these soaking wet clothes. What kind of crazy you mixed up in? You done something wrong? Let me know now! The ambulance is on its way, but I’ll call the cops on you too!” Nana searched her eyes for some signal as to how to proceed.

The young lady made a movement of her head and parted her lips as if to respond, but nothing came out.

“I don’t know what that means,” Nana let her know.

Daniel stood out of the way by the bedroom door while Nana sat the girl down. Nana could be rough, but he knew this girl was in good hands. The best actually.

Pondering this strange, wet, bruised creature that had shown up on their doorstep, he found himself mesmerized. Normally there was a calmness about him. Not much phased him. It worked both ways: he was not unspettled easily or easily moved.

He mused to himself, There’s nothing in the medical books that addresses the shock that comes over first-year medical students when a gorgeous, bruised woman shows up at one’s door.

Nana closed the door with him on the other side of it, interrupting his thoughts. She opened it quickly again as he was stepping away and whispered, “Keep an eye out for the EMTs.”

Standing over Jeannie who was sitting on the bed, Nana lifted Jeannie’s arms up in the air and pulled her wet silk T-shirt up and off. While Jeannie stood up she wrapped her arms around Nana’s shoulders and stepped out of her pajama-like silk bottoms and then put on the cotton night shirt that Nana had given to her to cover up.

Jeannie was beginning to gain her composure a bit and said through her diminishing tears, “First, I was silly enough to lock myself out of my house. And . . . then when I tried to climb through the window I slipped and gashed my head. I cut my feet as well. How awful is it?”

“You can speak,” Nana teased her as she sat next to her on the bed. She gently wiped Jeannie’s face with a soft towel to dry her tears.

“You’ll need to calm down now or your face is bound to swell up even more from so much crying. Maybe this here cream with aloe vera will keep the swelling down.” Nana, keeping with the quiet that had taken over the room, spoke in a whisper as she gently rubbed the cream on Jeannie’s face.
Daniel showed the paramedics the way to the bedroom when they arrived. He watched as the girl and Nana talked with them. One of the paramedics reached for the telephone and made a call while the other skillfully cleaned Jeannie’s wounds even more thoroughly. Before packing up to leave, he placed a bandage over the cut on her head, which turned out to be bloodier than deep.

He certainly keeps his distance, Jeannie thought to herself as she looked up and saw Daniel standing in the corner. Her heart pounded incredibly quickly inside her chest. Seeing him this close up took her breath away.

“So she’ll be alright?” Nana asked the paramedics.

“Yes, ma’am, she’ll be fine. Just bruised and terribly sore I imagine. We’ve asked her to come in first thing in the morning just to run a few tests for precautionary measures, but she’ll be alright.” The paramedics confided in Nana on their way out.

“Daniel, can you walk Jeannie home? The paramedics called her house and spoke with her brother. He’s at home now waiting for her. They moved into the Johanson’s old house just down the street.”

With great care, Daniel took Jeannie’s hand and gently placed his arms around her waist. She even smells good, he thought.

He was grateful that the rain had stopped making it easier for her to walk outdoors with his help.
“Just a few doors down?” he confirmed with Jeannie in regards to her home.

“Yes,” she whimpered in response.

“Oh you are our new neighbors?”

Before Jeannie could respond Daniel asked, “Is that him? Is that your brother at the door of your house?”

Jeannie nodded her head as she walked with her head on Daniel’s shoulder as he supported her.

Standing in front of their house holding the door open, Jeannie’s brother couldn’t believe what he was seeing.

Gingerly, Daniel handed Jeannie over to her brother keeping an eye on her as she struggled to stand on her own. He asked her, “Is it alright if I come by tomorrow to see how you are or if I can help in any way?”

Jeannie nodded signaling a pitiful yes and then disappeared into her house with her brother closing the door behind them.

Overwhelmed with a mix of emotions, Daniel took his time getting back home. Shaken, he allowed himself to rest in knowing she’d be alright, and that he could see her tomorrow.

Inside Jeannie’s house, her brother was furious with her. “Well, I hope you got what you wanted.” He spits out.

“It worked didn’t it? He’s coming over tomorrow.”

Tinka Harvard is a writer and theologian from Brooklyn, New York. A graduate of Union Theological Seminary at Columbia University in New York City with a Master’s in Divinity, she seeks to write stories, essays and poetry that lend ideas toward inspired living. www.tinkaharvard.com