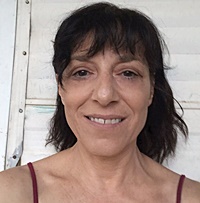 A WINTER COAT
by Sevasti Iyama

On a nightstand, there were red roses in a glass vase. Against the hospital’s stark fluorescent lighting, the roses made Calliope’s eyes hurt. That night, after she landed at JFK a cab drove her straight to the hospital.

Eyes closed, he lay on the hospital bed, and breathed through an oxygen mask. Tubes and catheters stemmed out of his nose and arm. The heart monitor’s screen showed spiked lines.  On the top right, there were two numbers, one over the other.  A pulse oximeter was attached to his finger.

Like a bumblebee, a nurse buzzed around his bed.

“Who brought the roses?” Calliope asked.

“My husband bought me roses when we met.”

The nurse smiled and left the room.

Calliope walked over to the nightstand, where the flowers perched, like soldiers at attention. She touched a rose.  A few petals cascaded to the floor. Suddenly, he had a coughing fit. Startled, she knocked the vase over. Flowers and water scattered everywhere. The vase shattered into broken shards. She saw her broken reflection in the glass pieces, like a cubist painting by Chagall.

He retched. There was green sputum on his lips. The oxygen mask fell off. The spiked lines on the monitor moved faster. She pressed the emergency button, and then scrambled on the floor, picking up the roses.

The nurse reappeared, like a fairy godmother. After the nurse gave him a shot and adjusted his mask, she saw Calliope hunched over, in a corner, staring at her clenched fist. Blood mixed with the roses, making the flowers look like rust.

The nurse cleaned and bandaged her right hand. An aide swept up the glass. Calliope stared at the man in the bed, who settled into a deep sleep, his chest rising up and down, like the waves she saw outside the Royal Hawaiian’s window where Mas and she stayed during their honeymoon in Hawaii, years ago.

“Have to change your father’s bedpan,” said the nurse.

“Honey, it’s freezing outside,” said the nurse. “Where’s your coat?”

The woman’s kindness took her aback. Calliope shrugged, and picked up the roses from a chair, where she had left them.

As Calliope walked down the hallway, the smell of Pine-sol permeated her senses. Although they lived in a huge house, Mas refused to hire a maid. He made Calliope clean, to earn her keep, and told her that she had to use Pine-Sol to scrub the toilets. The smell made her ill.

Once she reached the parking lot, she hurled the roses into the darkness.  She shivered in her thin leather jacket. After she booked the flight, they fought. As usual, the argument was about money. He had millions, and she had none except for the money he gave her, because she was a loser actress, a fact that he threw in her face. He paid for all her needs, from cigarettes to meals to headshots, and even a nose job. Before she left LA, she begged for a winter coat because New York had sub zero temperatures in February, but he said, “No. That ticket cost me an arm and leg!”

They fought just like her parents used to, except her father never hit her mother.

When she was 29, she fled New York. She did not think rationally when she moved to Los Angeles. It was more of a “fight or flight” response. In Hollywood, she got lost like many actors do. It was a town full of beautiful blondes with long legs, driving around in top down convertibles, blasting pop music.

And there was dark-haired, chain-smoking Calliope. She drove an old Chevette and blasted Metallica on the radio to cover up the noise inside her head. Although she moved 2451 miles away, she still heard them arguing. The music did not help. After Mas and she started fighting, she found relief in booze and benzos.

Outside the hospital, she reached inside her Prada handbag for her cigarettes, and lighter. She had less than fifty bucks in cash, but she had two credit cards. Mas was the authorized user, but she was a joint cardholder. Should she risk buying a coat? He would see it on the billing statement and freak out.

Her hands shook as she lit a cigarette.  Inside her bag, there was a mini bottle of Merlot that she confiscated from the airplane, next to her cell phone and a bottle of Xanax.

“Take only as needed for extreme anxiety,” the shrink had said.

My anxiety is always extreme, she thought.

She chased a pill with wine and smoked.

As a train screeched into the station a block away, her phone rang.

She trampled the cigarette with her shoes.

After the phone stopped ringing, she went inside.

As she waited for the elevator, she envisioned Mas home in their Hollywood Hills yellow stucco art deco house. She checked her cell. It was 11 pm Eastern standard time.  Back in LA, it was 8 pm.

Like the goddess Aphrodite, the house once rose out of a sea of pink bougainvilleas and red roses.  A month ago, Mas and she fought, again, and he pushed her head against the wall. After he let her go, she ran up to their bedroom, locked the door, and stared out of the window, which overlooked Beachwood canyon. Mas stormed outside with a weed whacker. Like the killer in the Texas Chainsaw Massacre, he attacked the roses and bougainvilleas, until all that was left were amputated stubs. In the distance, she heard the peacocks that belonged to a famous drummer who lived in a castle. The birds screamed. For a split second, Calliope thought the sound came from the flowers that were begging Mas for mercy.

As she stumbled down the hallway, she saw a body covered in a black body bag on a bed inside Room 142.  In Room 144, there was a white haired old woman propped up in bed.  Blue light from the TV flashed across her face. The old woman stared, right at her, and screeched like the peacocks and the sound effects from the movie Psycho. Calliope covered her ears, and bolted towards her father’s room.

His chest rattled as if his lungs were full of rocks.

Don’t take anything native from Hawaii, Mas had said. No rocks or sand. It will bring us bad luck.

I love you, Calli.

Another subway train screeched into the station.

So many years ago, when she lived at home in the Bronx with her parents, she left, five days a week, at 8 am, to take the subway to NYU. One cold winter day, she overslept and left at 8:30 am. She threw on a hoodie, because she couldn’t find her coat, and her acting teacher hated tardiness.
As she waited for the train on the outdoor subway platform, she saw her father, carrying a briefcase, wearing his thick winter coat. He walked right by her, keeping his head down, until he became an exclamation point in the distance.

When the train came, he entered a separate car.

Why did she marry Mas?  Was it because he was ten years older than her, and represented the father she never had as a child? Or was it because she was out in LA alone and had been for years? First she worked as a cocktail waitress at the Rainbow, and then as a waitress at the Beachwood coffee shop, which was where she met Mas one morning, when he sat at the counter, and she served him pancakes? By then, she had gotten her SAG card, thanks to THE BLOOD OF THE DAMNED, an awful B-movie where she played VAMPIRE’S VICTIM #2. Speaking three words got her the damn card.

“My daughter, take my coat,” he said with a smile. “Sit next to me on the train.”

She took his cold hand in hers. His lips were blue, and his face was a pale green, but his eyes were brown like hers.

He sighed, and closed his eyes.

The nurse came back. While the nurse adjusted his oxygen levels, Calliope pulled her hand away and walked to the window. Outside there was a little girl dressed in red playing in the snow, bobbing up and down, like an apple being dunked in white Belgian chocolate. Her cell phone rang. It was Mas. Her hands trembled as if she held a grenade. Suddenly, the EKG monitor sounded an alarm. Startled, she dropped the phone, while the piercing sound of the alarm drowned out the telephone ring. A crack formed on the screen like a lightning bolt. Nurses ran into the room, and someone yelled, “Code Blue.” She blindly turned towards the window. The little girl was stomping in the snow, as a tall man in a winter coat appeared.  The child ran towards him, screaming with laughter, as he picked her up, held her in his arms, and carried her away.

Sevasti Iyama is the blog writer for Cycles of Change Recovery Services. She has written for RehabReviews.com, the Antelope Valley Press and the Kern Valley Sun.  She’s also the co-author of How I got Sober, 10 Alcoholics and Addicts Tell their Personal Stories. Presently, she is working on a novel called, The Pomegranate Cowboy, which is loosely based on the myth of Persephone and Hades. She is pursuing a Masters Degree in Creative Writing from Southern New Hampshire University. Sevasti is from the Bronx, and Los Angeles. She lives in the small town of Lake Isabella, California but being a city girl at heart, she plans to go back to New York City, in the not too distant future.