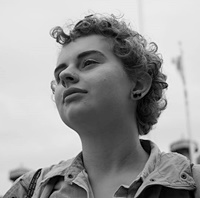 AT THE BREWERY DOWNTOWN
By Hannah Kludy

Martyr has six definitions on Dictionary.com


Fire never looked so sinister to me, a moth in North America. We speak of martyrs as though they are brave for dying when living is the real bitch. How does one look into the light and not want to come closer? It is warm and sensual, like the tingle of antennae spreading what they think is perfect sense. Or on the radio, for instance, where I hear this is revenge for a Latin lifestyle. Latin, as in the scriptures, like the basis for the western romance languages we speak. Nolite te bastardes. Nolite te bastardes. The martyrs are dead now, but I am still drawn to the fires burning on the lawn of some college or another. There once was a man who saved almost six hundred children from the Holocaust. Years later, when he was an old man they all came together and surprised him. I hope he’s dead now, and I am sure all the survivors do too. He has already lived too long.

The gin and tonic tastes like the pine-and-citrus cleaner that coats
the wooden floors of my favorite bar.
I took my best friend there last week and she played ski ball
and an overly long game of pool. I wondered why beer tastes better
in a glass than in a bottle. She finished hers and asked me and I said
I don’t know, it just does.
My dad said summer shandy was invented because some brewer had
almost run out of beer when a huge crowd showed up and he mixed
what he had left with lemonade but my dad was drunk when he said so,
so I don’t know.
The shandy makes me want to skinny-dip in a lake, but I’m afraid
of water that isn’t clear and shallow.
I want to see the bottom. I never see the bottom.

At the Brewery Downtown

We are in a new town trying new things.
The restaurant I am at is expensive
so I am thinking about the time I was in DC.
All the lawyers in the world came
and ordered drinks which meant that my mojito
was late and I was snappy.
This expensive place has great martinis
but I am somehow less happy here
though I am not entirely alone.

We order fried pickles because they are cheap
and we decide to get frozen pizzas on the way home.
He picks Jacks and I don’t say anything but I think
I would rather die than eat Jacks pizza once more in my life.
That’s what poor people eat.
That, and pasta with melted American cheese.
When I smell it cooking, I want to scream.

The Emperor of Ice Cream

When his friend died my husband broke
a table.

The funeral was open casket
and the gunshot wound
made his face look like the mortician
made without ever seeing
a person.

I didn’t know what to say.
he died and I never cried.
He was seventeen.
Let be be the finale of seem.

Hannah Kludy is an MFA candidate at Creighton University. She earned her BA in Creative Writing and Publishing at Northwest Missouri State University. Her work has been published in the Northwest Missourian and Medium Weight Forks, Surcarnochee Review, Red Mud Review, Broad Magazine, Unlikely Stories, The Progenitor, Drunken Monkeys, Five on the Fifth, Adanna Literary Journal, Windmill, and The Bitchin’ Kitsch. She has also been published, and won the fiction prize in, Cardinal Sins Journal.