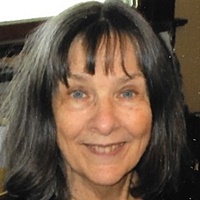 
Death calls him from the mirror
but men can’t reach her alive.
The mirror remains only mirror
until Orpheus puts on his gloves.

Hands first, he passes through the glass,
becoming Death’s lover.  Mortal,
he longs for Eurydice, her body.

Orpheus wants both women but
Death demands he choose.  You know
how it ends.  She watches him turn, the mirror
reflecting the fatal gesture.

Alone, he exits to the other side.
Eurydice is dead.
All is useless.  He pushes

against a thick wall of glass,
the voidclear, unbearable as
an empty page
on which no words assemble.

Hundreds of birds gather in the thorn bushes
at five o’clock.  They
chatter, even argue the direction they’ll take.
The more reluctant hesitate
before they join the formation
above the bridge.  Next day they
repeat the maneuver.  In dreams I fly,
arms outstretched,
palms down, sometimes a sidewalk below.
A gust of wind lifts me, momentarily
taking my breath.  Why do the birds return?
Isn’t flight enough?
It takes them far beyond the bushes,
their incessant brambles.
Tonight, from high altitude,
I understand.  Loneliness:  a consequence
of continuous flight.

PUTTING MY CHURCH FACE TO REST

After childhood I wore it to the office,
to parties, to church  — too always sweet,
a gift to lovers until,
tired of repetition, I peeled off layers
of its façade, worn
for Protestant approval.   Now, when I choose
to reprise mask it’s only cosmetic:   red, outlined lips,
darkened lashes, and a shadow
smeared across my eyelids. I draw
upon a studied precision
my grandfather practiced.
The town’s undertaker, he worked
to make up the dead
to appear like they did before dying.

He was designed to care
for the garden. It was lonely work.
Incompletion possessed him, contributing

to his distress. Eventually gifted with a body
like his and not like his,
he partnered.  From her beginning

she had an inkling they couldn’t sustain
the honeymoon.  Enter the snake
we were taught to blame. It whispered,

“You must not lose your self
in that party of two.”  In accord
with the serpent, the woman decided

to pass onto the man its advice, offered
with an apple slice.
She made her deadline just in time.

After three months their relationship
had turned into
a hothouse of unattainable expectations.

Because her religion wouldn’t allow
my father’s mother to cut her hair
she coiled the length of it into a bun
secured with hairpins and
over it mesh she’d gathered and stitched into
a circular shape  the church called a covering.
Bareheaded, her hair bobbed and permed
my mother broke the rules but
the angels didn’t care what she’d done
with her hair.  She wasn’t blood.  Without
hat or scarf, my hair cut short, I lived
outside the blessed.  Angels angrily flapped
their wings behind me like conscience.  Before
I gave up I looked into
mirrors and windows to get a glimpse of them

reflected there.  One Christmas morning
a white mist spiraled the tree,
dropping to the floor below it.  Splinters of spun glass
worked their way into my bare feet.
I’d stepped into angels’ hair.

Jeanette L. Miller – A graduate of the Iowa Writers’ workshop, her poems have been published in Caesura, Phoebe, Shenandoah, Prairie Schooner, Prompt Press, Pegasus, among others. Now retired from teaching creative writing as well as practicing as a mental health counselor, she is writing a memoir about her experience as a caregiver for her elderly parents.  Excerpts of it were published by “Yuan Yang: a Journal of Hong Kong & International writing by the English department of the University of Hong Kong.