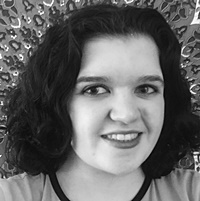 FAKE PEOPLE ARE THE BEST ONES
By Cassie Follman

When I was a kid, I was enamored with the world of Pretend. Endless possibilities stretched out before me, and imagining fake scenarios came second nature. Characters squirmed their way into my brain and sunk their teeth into the caverns of my ears. They whispered adventures that I had to write, and refused to leave me alone, like my incessant younger cousin who had just discovered annoying people was the single-handedly most entertaining thing in existence. To please the characters, I would often act out these adventures myself, or through cunning negotiation with my older sister.  This tactic usually involved me promising to give her the last piece of tomato pie pizza. I was lucky that her main motivation in life at the time was food, it would have been much more difficult if she had requested something else, like Webkinz, as payment. Those bitches were expensive.

One such situation consisted of my sister and me pretending that we were heroines with magical abilities. While my mom shopped, we ran around Ann Taylor, ducking into coat racks to battle dragons. We stormed upon display sets and dashed into dressing rooms to rescue timid little boys who cowered under their beds.

“Oh, how can I ever repay you?” They begged while sinking to their knees in awe of our amazingness.

“By swearing your allegiance to us and promising that if you are ever in danger, you will call for us.” Of course, they always did.

Sometimes my sister would screw up the story by adding in, “And don’t forget to tell everyone that I’m the superior sister,” or other equally irritating comments that she only said to rile me up.

It worked, too. Her add-ins usually led to me yelling at her for ruining everything by breaking the magic. Not to mention that she had messed up the scene where I was supposed to be crowned The Greatest Heroine of All Time.

Most children have a favorite stuffed animal, my sister’s was a terrifying cat, named Fuzzy, that she slept with until she became “too cool”, and went to high school. I was never obsessed with a certain object, though that did not prevent my obscene collection of stuffed fluffy white rabbits and black Labrador puppies from storming my bed like a castle and staking their claim there for years. Instead, my Fuzzy manifested from Pretend.

I was addicted to making one character as real as possible. He was formed from photographs and stories told with shiny, melancholic eyes. His hair was messy, dirty blond, his eyes an indeterminate blue. The khakis he wore were tattered, the beer t-shirt had holes he couldn’t have been prouder of, and his loafers were destroyed. Huge glasses were perched on his nose. My dad.

He never said much. The comments were small, insignificant. Their structure was flawed, and ideas ran together. They swirled in bubblegum pink and lilac, like the ‘potions’ I made out of only my mother’s finest bath products. Their mere existence made them invaluable.

The words he said were lies, as he was not real. At some point he was, but for my life, he was nothing more than a story. I outlined his image in my head and stared at the crappy brown chair that used to be his. With my eyes squeezed tight, I would put him together one piece at a time.

“Maybe if I stared with enough intent, I could conjure him up into existence.” I had whispered to myself on one occasion.

Once, I went out to the swing set behind my house and kicked my legs as hard as I could. My rhythm on the swing was wobbly. I imagined that my extreme height was due to my dad’s strong arms sending me flying up, up, up toward the kaleidoscope leaves from the trees in mid-October.

I craved validation from the one person I would never receive it from. On the occasions that we would talk, he fueled my pride. The voice was the hardest part, and I could never get it quite right. I tried different movie stars, attempting to find one that fit. For a while I settled with Ferris Bueller, but I grew frustrated as it didn’t sound perfect enough.

Sometimes, I believed my mom thought I was insane, often asking me, “Who are you talking to?”

Out of embarrassment, I never managed to respond further than, “Ugh, no one!”

Pretend was both rewarding and torturous. It was like I was desperately thirsty, and my brain conjured up a glass as a mirage. Then, it filled that glass to the brim with ice cold water. I could almost feel the water running down my throat, putting out the fire. The water would never be mine, as all games have their limitations. Still, for those few seconds when I was able to picture my dad, the thirst was a little less unbearable.

Cassie Follman is an aspiring writer from Philadelphia, PA. She is currently obtaining a Bachelor’s degree in History and English, with an emphasis in Creative Writing at Smith College. She has been writing and reading her entire life and has served on the boards for school newspapers and literary magazines.