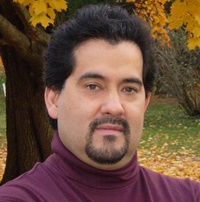 Time’s wing casts a shadow
on the spun world;

The pendulous moon
beats the shore into
grains of sand;

We fill the glass
and watch them drop
through the elegant waist
so that we don’t forget,

Read in the shades
the time we have left.

*A gnomon is the part of a sundial that casts a shadow.

There was a time when ships fell off the edge of the world,
Sails blown by the puffed cheeks of the West Wind,
The open jaws of Leviathan waiting in the abyss.

An upended fish bowl contained the firmament:
The clouds, the sun and moon, and all the stars –
The only escape through death’s door.

Scurrying about with crude instruments
We etched elaborate maps, now obsolete,
The face of the globe morphed as nations
Rose and fell, as even the gods dropped
From the sky when heretics breached the outer shell.

The spyglass gave way to vast arrays of electric ears
That sprang up in the desert like grey mushrooms;
On the highest peaks, stewards of the glass
Map the cosmos, a great eye beyond the clouds
Peers toward the beginning of time,

Gives shape to the chartless, a plexus of storms
That appears as a delicate eyelash, the Milky Way
Like a mote on a feather.

We cross the field of stars back to the body,
Drawn with irresistible force,
Into its inner filaments, its colony of cells,
Beyond the orbits in its base minerals
Where we retreat to an immeasurable heaven.

In the umbra of the skeletal Domū
A bough of yellow butterflies,
A swarm of gingko leaves,
Belies a wasteland wrought
By a malevolent windfall
On that August morning.

Toxic spores still linger
In the resilient earth,
But stubborn roots push back
With green shoots and burnished petals;

The stewards vanished without warning
In a cataclysm of light,
Their shadows fixed on the sidewalks
In mid-stride without a chance for astonishment;
In the distance, a lingering death.

Embraced by the shade of an ash oceans away,
I cast a threnody upon these leaves,
Begin to fathom my vulnerability
To things I cannot sense, or foresee.

I mourn and lament,
But find solace in the persistent persimmon
And its healing flesh.

Guardian of the two worlds,
Its roots penetrate the abyss,
Its branches the heavens.

Odin once lashed himself to its trunk,
Lost an eye to the ravens,
But gained the secret of the runes,
And with a single bolt begat us from its wood.

Diviners stole their staves from the shoots,
Moved between worlds, serpents fled its shadow,
The gods held council beneath its span.

Sentinel from a narrow portal of poured stone,
The arms stir with the approach of the North wind,
Begin to molt their myriad sails.

It has known the changing faces of the moon,
Been a sieve of rain and sun,
Stood naked in the snow,
And voiced my morning thoughts
With its many tongues.

The old woman next door sweeps vehemently:
“Too much leaves!”

*The Viking word for Ash

Lifted gently from the cage,
Deprived of the final light,
I continue to sing beyond the body:

A cold cell for the journey,
A last act of kindness for another’s breath.

Bathed and caressed, finely stitched
To a plexus of streams and tributaries –
A jolt from the coil, the vena cava floods
And I awaken in a strange room.

This was once unthinkable.

What if I had relieved
Mahler’s fading metronome?
He may have lived longer,
But would I have spoiled his muse?

And this fellow, whose own heart
So often failed him,
Will he become a better man?

Robert René Galván, born in San Antonio,resides in New York City where he works as a professional musician and poet. He has taught at Manhattan College, The College of Mount Saint Vincent and the Brooklyn Conservatory of Music. His last collection of poems is entitled, Meteors, published by Lux Nova Press. His poetry will be featured in upcoming issues of the Hawaii Review and Right Hand Pointing.