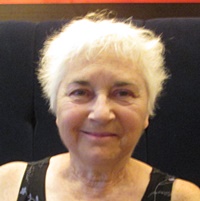 OUR  SALLY
by Ruth Deming

Over the years, The Newman Girls followed the fortunes of their next door neighbors in Shaker Heights, the fashionable suburb of Cleveland, Ohio. It was just their good fortune to live next door to the Hunters. Each family had four daughters. Comparisons were inevitable. And inevitably unpleasant.

The Hunter’s house had red shutters on the windows, the Newmans had green. The Hunters ate “shaved ham” from the deli and kept their butter in a kitchen cabinet, but not in the fridge. The Newmans were among the first Jews in the neighborhood back then.  The Sherwins, on the next street, got eggs thrown at their windows.

The Hunters were debutantes, like in those Katherine Hepburn black and white films, where she’d come down the stairs with a smile and a wink. The names of the Hunter kids were as unforgettable as our backyard swing set with the blue seesaw the kids always tried to tip over.

Christina, Rosemary, Ellen, and little Sally. Four girls to The Newmans  four girls. The Newmans were not allowed to have pets of any kind, while the Hunters had Pete, a black French poodle, a yapper, who followed them like a fifth child.

For the nouveau riche of Shaker there was an assortment of private schools. The Hunters attended Hathaway Brown, tucked away in the woods. A yellow mini-school bus would pick them up every morning for their special college-prep education. Pete would be outside yapping goodbye.

Trouble was unknown. When you’re young, wealthy, athletic and poised trouble was one of the bad desserts that would greet you later in life.

Somehow the years swept by. Glenmore Road was no longer their home, with its “island” across the street, land that would never be built upon, perfect for baseball, building forts, and reading dirty books like Peyton Place by Grace Metalius. Sharon, Lilly, Annabell and Lynn Newman reluctantly left when Dad found new jobs in the women’s apparel field in New York City and Boston.

The Hunters had indeed been “prepped” by their gentiles-only Hathaway Brown.

Christina Hunter became an expert on race relations. Wrote a couple of books on the subject. Married and divorced Kelsey, a black man. Their daughter, Judith, needed years of psychotherapy. Rosemary became a social worker who specialized in working with people with borderline personality disorder.

Annabell bought her own clothing store, “My Darling Daughter,” which did quite well. Then she bought the store next door. “Hunter’s Chocolateria.” When her clothes bulged at the seams, she bought a yoga studio and lost weight.

Little Sally was as talented as the others. Were these in fact the modern-day Bronte sisters?  Creative juices oozed from her pores like honey from Winnie the Pooh’s honey pot. She was a portrait photographer, trying to get her name out to the public and much too busy to think of marriage or hooking up with a mate. Either sex would be fine.

And then came her stroke.

She lay in bed in her Manhattan flat. The morning light crept through her blinds. Today’s the day, she thought, when she’d photograph the last of the twins, for a book on twins she was working on. She hoped Aperture Press, one of the best, would publish it. It was not impossible. Just improbable.

Then it happened. Slowly, like spilt milk dripping on the floor. The left side of her face, with her blue eyes, quivered and froze in place. Her entire left arm lost feeling, as did her left foot.

“A stroke?” she thought. “But I’m too young.” She couldn’t for now remember how old she was but she wondered how she could get help. A million thoughts came to mind. Bette Davis going blind in Dark Victory. Ray Milland attempting to kill his wife in Dial M for Murder. Of course, she couldn’t remember the names of the films, but she clearly saw the famous scenes.

Her survival instinct sprang into action like a revved-up ballerina. Without a further thought, she rolled out of bed – thump! thump! – and kept rolling and crawling into the living room. Her hardwood floors scraped her elbows and knees through her pink silk pajamas. She was so dizzy the room spun about her as if she were on a Ferris wheel.

Her blond Ikea table sat waiting for her. Toast and jam is what she would have, if only she could. She stared up at it from the floor. Her land line hung on the wall, with its curlicue cord leering at her: Catch me if you can. She pulled the cord with her right arm, it flopped down onto the floor and she dialed 9-1-1.

She made a bargain with the universe. Save me and I will change my life.

It seemed to be working. Every morning Luis from the rehab knocked on her door and wheeled her down the elevator in her Hovercraft wheelchair. A water bottle sat in one of the pockets. Her sisters paid for everything and told her not to worry.

The rehab was in a former elementary school. The floor-to-ceiling windows allowed plenty of light. Cindy, her personal trainer, fixed Sally’s hair. How good it felt to have her shoulder-length graying hair combed, straight down to the scalp. Sally was one of three people who’d suffered a stroke. Others were individuals with loathesome diseases such as Parkinson’s and that dreadful ALS. “Just shoot me dead,” thought Sally.

She had no intention of dying.

People flocked to help her, people she hadn’t seen in decades.

One of The Newmans came to visit her in her Manhattan pad. Lynn took off from her job as manager of The Merlin Theatre and stayed with Sally a few days. They’d been close as children. Lynn’s birthday was July 3, while Sally’s was the fourth. Since Lynn was a pack rat, she brought a huge satchel of things for her friend, including a Minolta camera someone left at the theater.

“I tell you, Sal,” she said when they sat together in the kitchen. “We could open a store with the things people leave behind at the theater.”

Sally visualized a darkened movie theater, with 12 different theaters. Once when she brought her nieces Juliet and Robin to see the Disney film, “Fantastic Mr. Fox,” the girls did somersaults across the carpet. How they laughed and didn’t mind people staring. She encouraged their playfulness and individuality.

Lynn and Sally lounged at the kitchen table. Using two hands, Sally poured Lynn a cup of cinnamon tea. Her face was immovable. She pinched it. Then gave it a playful slap.

“Will you ever be able to speak?” asked Lynn.

“Noooo,” came a sort of whisper.

Lynn, who had shoulder-length black hair, pushed the Minolta in front of Sally. Sally remembered attending summer camp and all the photos she had taken of fellow campers and counselors. They were somewhere in her apartment. She smiled as she remembered the short black-haired counselor Ina. They liked one another and had written postcards for a while. Wasn’t it Ina who had organized the skinny dip in the lake?

Sally had never felt so free in her life. As she lowered her skinny body into the water she felt not a whiff of self-consciousness as the cooling waters embraced her like the white gloves they wore as debutantes.

She lifted up the camera with both hands and looked tentatively at Lynn. Gingerly, she stood up. She was quite good at this now. Rehab had taught her much. Everything, however, must be done slowly. As slowly as a little mouse sneaking into her flat and helping itself to the Cheerios she’d spilt on the floor or dribbles of popcorn. Did Cinderella’s mice eat everything, like hers did?

After she picked up the camera, a sound came from Sally’s mouth. Laughter. Real, genuine laughter. Lynn stared at her.

“Shit,” said Lynn. “You can’t tell me you’re never gonna recover. You know what my daddy used to say?”

Sally looked over at her, remembering Lynn’s father who would occasionally change into his Marine Corps uniform, and brag to the assembled neighbors, “I’m tough as nails.

“And so are you, Sally Hunter.”

Sally got up from the table and haltingly walked into her bedroom. In one of the bottom drawers was a manila envelope. Inside was a swatch of Grandma Hunter’s hair. With difficulty, she sat on the floor, opened up the envelope, and spread the hair out on the floor. She could feel its softness  with her right hand, and now, with part of her left hand. With the Minolta, she photographed it.

Her craving to photograph became unstoppable. If the Stones had sung “I Can’t Get No Satisfaction” she made it her motto to find satisfaction by photographing everything, with the help of Luis: pies and cakes on the counter at the Broadway Deli, where breakfast went for a good fifteen dollars. Wealthy people walking their dogs. Coffee carts parked on the street with foreign-born men and women dispensing hot dogs, hot salted peanuts, and sweet-smelling French fries. And, of course, children sitting on the lions at the New York Public Library.

Sally’s sister Rosemary helped her find an agent. The photographs traveled around Manhattan, appearing in top galleries. “Healing through Photography” was a sensation. How many people in Manhattan were broken down, depressed, suffering from supposedly incurable conditions. Everyone wanted a piece of Sally Hunter and her positive outlook on life.

Lynn decided to visit her friend again. She got her friend Neil, the assistant manager, to take charge of the Merlin Theater, and she took the Greyhound to Manhattan.

Sally heard her friend walk down the linoleum hallway and waited for her at the door.

“Lynn?” she asked as she unlocked the chain.

It was not Lynn. It was a man in a black ski cap, who pushed Sally aside and rushed through her apartment. He lifted up the cushions in the living room, rifled through her underwear drawer, and when he saw her camera, he put it in his pocket.

Sally went after him with a broomstick, poking him wherever she could reach. Her strength was abysmal. He had a few unkind words for her, as he kicked her and punched her in the mouth.

“Celebrated photographer killed by intruder,” read the obituary notice. “Memorial service will be held at the O’Toole Art Gallery, 530 West 25 th Street. Naturally the Newman Girls made the trip. Their sister, Annabell, met them at the art gallery in her late-model Mercedes SUV.

When Lynn signed the Legacy guestbook, a cryptic message had been left. “Sorry,” said anonymous. “Was desperate to buy my cocaine. Am now enrolled in a 12-Step Program.”

Ruth Z. Deming, a psychotherapist, lives in Willow Grove, PA, a suburb of Philadelphia in the good ole USA. A mental health advocate, she writes Guest Columns for local papers to help lessen stigma for mental illness. Her poetry and prose have been published in Blood and Thunder, Pure Slush, Page and Spine, Bookends Review and other literary venues. She writes a poem a day on Facebook.