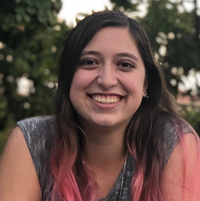 BECAUSE IT FELT GOOD
by Nikki Munoz

Have you ever felt halved? You think that you find someone that you can share your life with. And you think that that entails being the person’s other half, and it does. But what if you don’t want to be just a half? What if you want to be full? What if, by giving your whole self over to this other person, you start to feel emptied out? Like, rather than sharing yourself, you have given it up entirely. Now, if you’re with her, sitting next to her, lying with her, fucking her, you still don’t feel full. Yet, when you’re by yourself, you don’t reach fullness either. With or without the other person, you’re still incomplete. And you don’t grow up believing that love is supposed to make you feel incomplete. You don’t watch people jump through hoops for a kind of love that drains them out.

I felt halved. When it ended, I still felt halved. It took a long time to feel full again, and even now, it wavers. I decided I could never give someone my all again. I didn’t know what love is, but it couldn’t be feeling emptied. And until I figure out what that means and what it means to have a grasp on your own self, then I can’t give anything at all to anyone.

And then, I met her.

I was attracted to her, in more ways than one. She was someone I was bound to gravitate toward. I liked being around her and I liked her and I knew it was mutual and I liked that. There isn’t anything quite as good as knowing someone else feels as strongly about you as you do about them. Feeling those emotions line up evenly between both people. I got lost in what was happening. I wanted to see her all the time, asking her to come over close to every night. She would leave and I would think of when it was too soon to ask again. But she would always come and then I didn’t worry about time anymore. I felt the sense of time escape me.

But I started to feel that emptying again. And I needed to do something about it. I had to, for once, choose my own self over another person, despite how much I felt for that person and despite that person being her.

She asked me why I did anything to begin with, why I started anything with her at all.     And I had so many words I wanted to say to her, but all I could say was, “Because it felt good.”

I couldn’t avoid it and so I began to face it. And, at first, I thought it to be the most selfish thing anyone could do. How selfish it is to start to give yourself to another person, knowing full well that you’re never going to give it all. And, consequently, to start to take in somebody else, knowing you’re never going to accept them in full. How cruel to revel in the happiness, to enjoy it as a temporary high, knowing that the person giving you that happiness is under the impression that this is the beginning of something and not the whole of it. To think: I like how this feels and that is all there is.

Because it felt good, you cruel shithead.

But, then, I got to thinking about it differently, because it felt good. It started playing a different tune in my mind. He had found something in me that felt so good to him that he broke all boundaries he had set for himself. Maybe he wasn’t thinking about any consequences because it had felt so good. Maybe he wasn’t being selfish, nor being selfless, but merely being. Not thinking, but just feeling.

And how could I blame someone for feeling? I had been doing the same.