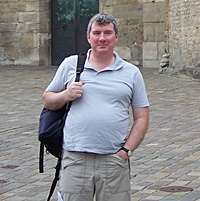 THE MISSING MASTER
by David McVey

The night before I addressed the conference, I was lying in bed in a tiny room in a Hall of Residence. I picked up my dog-eared copy of McDonnell and began to read.

McDonnell stood in the middle of the street, the fiery background reflected in the filthy pools among the cobbles. The clamour died down; McDonnell, dirty, ill-shod, swathed in poor, tattered rags, looked up at the window. Percival had been looking out at the smoking ruins of his factory, but now turned his gaze on McDonnell’s pathetic yet defiant figure. McDonnell, emboldened by the reluctance of the militia to carry out their orders, fixed his gaze on Percival. ‘You have lost your factory; you have lost some of your wealth; but you gaze out here on we who have lost everything, rather, who have had everything taken from us. Our dignity, our freedom, our health, our thoughts have been captive while we have toiled and laboured for your mean wages! You have defied God, his Word, decency, justice, fairness. I defy you!’

A thin, pale, bedraggled girl ran to McDonnell in the ensuing hush, and began entreating him to retire to safety. Then both turned to see the militia begin their charge, framed in the fire’s ghastly glow.

I stood at the front of the lecture room. Backsides shuffled in seats; a pen clattered onto the tiles. It was time to start.

‘James Duncan wrote historical novels after the fashion of Scott, though with a blend of Calvinism and Romance which anticipates Stevenson. He was perhaps the only major Scottish novelist in the period between those two giants, but his most memorable work is unlike anything they produced. McDonnell was the only serious contemporary attempt by a Scottish author to interpret the Industrial Revolution.’

By their faces some of them have never heard of McDonnell, and now they’ve decided that, because it’s not set in London, it’s parochial.

‘Superficially, it is a lengthy, Dickensian work, employing the familiar thwarted-heir plot. But set in a growing, smoke-blackened Glasgow, a dark pit into which the hope of the working classes is thrown and lost, the novel brings together Irish immigrants, dispossessed Highlanders, rapacious industrialists, and rings with gritty, vibrant Scots dialogue.

‘Scottish literature was retreating into a Kailyard haunted by kindly ministers, genial schoolmasters, and mumbling rustics, a world foreign to most Scots. Yet they would recognise the harsh reality of McDonnell; I commend it to you, in closing, as the most neglected great novel of the nineteenth century.’

That shook them; Duncan was harmless when kept in his tartan ghetto, but they resented any attempt to raise him alongside Dickens, Hardy and company. There was polite applause, a handful of desultory questions, and then the lecture-room was empty; I began to stuff my briefcase.

Only Agnes Filey remained. Small and thin and with long straggly grey hair, she was a former colleague who had moved to work in a university down south. Meeting up with her was a pleasure I’d been looking forward to but I didn’t feel genial at that moment. She was clearly about to offer me some words of consolation, but I spoke first and snapped, ‘That went down like a cold tea-bag, didn’t it?’

‘I think. They’ve no interest in Duncan.’

She smiled now, faintly. ‘Most of them,’ I went on, indicating the empty auditorium with a sweep of my hand, ‘have never read any of his stuff, and they won’t start now. I might as well have been talking about Desperate Dan.’

Agnes continued to smile and told me she had some news. ‘I’m coming back to Scotland, to the University. I just heard about the job this morning.’

‘That’s brilliant, Agnes! What, back in the department? Senior Lecturer, maybe?’

‘No, nothing like that. I just wanted to move back but nobody is taking on lecturers in the arts. I’m to be Academic Liaison Officer with the new Quality Enhancement of Learning and Teaching Team.’

‘Oh, hell, yes, the mysterious QuELT.’ I remembered the acronym from the subject line of university emails I hadn’t opened. ‘So, what does your new job involve?’

‘I have absolutely no idea,’ she laughed, ‘They did explain, but…’

The final day’s lecture began as a disappointment, and ended as a personal insult. The speaker, an obscurity in brown cords from some provincial English redbrick, was ostensibly covering some abstruse aspects of the Victorian novel. In rambling through his subject he dismissed Duncan as ‘…a mildly-interesting mid-Victorian writer of pot-boilers.’ Afterwards, I went straight to the bar to drown my anger; I was starting to calm down when Agnes appeared at my table. I made a face and she smiled.

‘In my more optimistic moments,’ I said, ‘I like to think that one or two of them might be intrigued enough to actually read the book when it comes out.’

‘What – the critical biography of Duncan? Are you still working on that?

‘Yup, The Missing Master, it’s called. I hope to finish it next semester.’

‘Well, you look like you need that “thin, pale, bedraggled girl” who comforts MacDonnell in the book.’

‘His daughter. Duncan often drew from life; his daughter Christina was in her late teens when he wrote MacDonnell, and he modelled the character on her. He was usually penniless, his wife had died, and Christina nursed him through, like the girl in the novel.’

‘Well, you need someone like her. Or maybe you just need a drink.’

Back in Glasgow it was soon Freshers’ Week. I was making my way to the department from the library after putting long hours into the book, trying to get the manuscript in shape before the bedlam of the new academic year. It was pouring with rain, one of those September torrents that paint Glasgow a smoky grey. I bumped into Agnes for the first time since she’d started her new job. ‘I’d like to stop,’ I said, ‘But I’ve got a meeting with the new Professor.’

‘Yes. He’s only just arrived; I haven’t met him yet, so I must go and pay tribute.’

I climbed the stairs, occasionally being flattened against the wall by porters carrying stylish, modern furniture into the Professorial Suite. The retiring Professor had been a kindly, old-fashioned sort, her room a wood-panelled haven dotted with antiques.

Besides the new Professor, I was joined in the meeting by a couple of my senior colleagues; we all stood as the new man entered, a sharp-suited, slightly flabby figure, balding at the temples. He took off his jacket, revealing a crisp shirt of blinding whiteness, and sat down. He welcomed us, and began to speak in measured, affable tones.

‘I can only congratulate my predecessor on the fine department she leaves behind her; I look forward to working with you all. Of course, times are changing in the academic world; it is no longer enough simply to teach English literature well. Our students must perform, we must set and achieve targets, win sponsorship but maintain modest expenditure levels. I aim to build on your undoubted expertise, by putting this department on a business footing. It will be a whole new life for us all.’

We listened with growing unease; he outlined the links we were to cultivate with industry and finance (‘English literature will survive as an academic subject if it can pay its way’). He went round us individually, identifying economies. He really warmed up when he came to me.

‘You’re working on this study of James Duncan, aren’t you? I was wondering whether you genuinely believe that it represents good use of the Department’s time?’

‘Yes I do. Duncan is a major Glasgow novelist, and a good publications record reflects well on the status of the Department.’

‘I hear what you’re saying, and you have a point; but mere status doesn’t attract funding. Don’t you think making links with potential sponsors, for example, might be more fruitful than researching a minor local novelist.’

I swallowed hard. At the end of the meeting, he asked me to stay.

‘Wilson, I was very interested in what you had to say, and I must say I’m very impressed with the body of work you’ve produced. But I’m sure you’ll see that we have to think ahead, read markets, anticipate future demand,’ he paused, pouring me a drink, ‘So I want you to know that I intend to start withdrawing from teaching Scottish Literature; industry wants thinking people, articulate, well-read – but not parochial. This year will be the last intake. But there’s also the question of the Duncan research you carry out here. I’m afraid I can’t allow such unproductive work in the department’s time. I’m sure you’ll understand.’

‘But I need our resources to help complete the book!’

I just sat there; my expression must have been idiotic. I suppose he expected some kind of tirade against censorship, a passionate cry from the heart against the tainting of art by commerce; I would have liked to have laid into him, but I was so stunned that I stood up quietly, excused myself and walked stiffly through the corridors, down the stairs, and across the campus to the Staff Club. There I downed drink after drink, cursed the way education was going, saw clearly the day when I’d lecture only on those writers the publishers wanted to push, had a vivid apocalyptic vision of the existing manuscript of The Missing Master being flushed down the professorial toilet, and finally felt that I had sufficient courage to go and articulate my feelings.

I felt myself walking into destiny, but in reality I probably looked like some drunk trying to remember where he lived. I groped my way upstairs, found the professor’s door, and threw it open; he was sitting behind his new desk tapping and stroking an iPad while his PA sat opposite. They stopped and looked at me as I grabbed one of the doorposts for support. ‘I’ve come to tell you a few things…’ I couldn’t for the life of me remember his name, so I banged on, making room for his PA to slip away. ‘This is NOT a supermarket; it is a university, and I wish to teach ART, LITERATURE… um… BEAUTY and TRUTH. If I want to sell things I will get a job at Tesco. You people… you people should be fighting for us, not caving in and…’ My fine speech, which had come together like a perfectly-played symphony while drinking in the Staff Club, became disjointed in my mind, broke up, and dissolved. I stood open-mouthed for a little while, then fell over. Then I looked up at the Professor and gasped ‘Percival!’ Or so I’m told, anyway.

Agnes had appeared by then. By all accounts I saw her and cried ‘Christina!’

‘No. We never learn her name, do we?’ I said in my befuddlement, ‘the pale thin girl’. Some security men had also appeared – in fact I believe I’d attracted quite a crowd – and two of them helped me up and began to lead me out of the door. ‘Are you the Militia?’ I apparently asked. It was shortly after this that I finally passed out. These days it’s a story that always gets a few laughs down the Jobcentre Plus.

David McVey lectures at New College Lanarkshire in Scotland. He has published over 120 short stories and a great deal of non-fiction that focuses on history and the outdoors. He enjoys hillwalking, visiting historic sites, reading, watching TV, and supporting his home-town football (ie, soccer) team, Kirkintilloch Rob Roy FC.