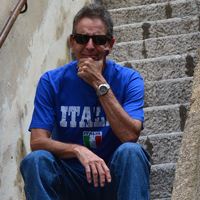 IN A PORTUGUESE FIELD
by George Moore

In a Portuguese Field

A dolmen by abandoned rails
that cross this terrible, empty field
in lower Europe, and the grave
toppled sometime in the first century
and near the rusted tracks
still ringing with murderous days
and some poor writer struggling
for words, distills a rude
and rudimentary history
and no one comes up from the farm
to see what the stranger is doing.
Some things so evil can never be
given in verse, or translated, or told
again in the same way. This
dolmen in an orchard has seen
Romans displaced by Visigoths
displaced by Muslims before the Church
took it all into its cradle. That act
of swift rewriting, he knows it,
decries it, confuses it
with his own poor truth.

and then dive again
into the solitary deep
her homeland Poland
where the dead rise up to meet her.

I am the new hundred-year-old man,
bones white as glass polished by sand,

arms like the twigs of the dying rose,
lips as sweet as figs below a steeple nose.

I once was a boy, lost in the thrill of surf,
once traveled the world in a psychedelic hearse,

feeding berries to the birds in Kathmandu
and wine to the women of old Chengdu.

My eyes are like diamonds cut from the rough
out of the sockets of heaven, high enough

to see the fields of my years like a great desert
surrounded with forests full of living spirits.

I am here on the threshold of a fading world
caught on a thorn, in the rose’s first whorl.

Pretend to speak!
Go on, those words
you mimic are hollow
as the stinging nettle.

Yet you live a hundred years
outlive the best of us
in your cage, a factory
of lost voices.

on the raft of your tongue.
You fly north to work collages
of yellow, blue and orange
of oranges and lemons

and the deadliest fruit
and yet no one believes you.
Your colors are the colors
of the sun which we

never recover
like needles and lips
prophecies and whispers
and the first bite of your Eucharist.

George Moore recent collections include Saint Agnes Outside the Walls (FutureCycle 2016) and Children’s Drawings of the Universe (Salmon Poetry 2015). Nominated for six Pushcart Prizes, and a finalist for both the National Poetry Series and the Brittingham Poetry Award, his work has appeared in Arc, Stand, Antigonish Review, Orbis, Valparaiso, Colorado Review and the Atlantic

IN DEFENSE OF ISRAEL by Regina Saad

THAT DAY by Girard Tournesol

THEORY OF RELATIVITY by Abena Ntoso