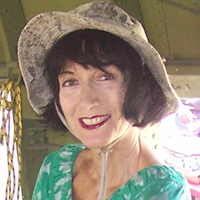 The salt-sparkled sand
Drummed with life
Beneath the yielding crust.
And the caverns and tunnels,
Blind and subterranean,
Hid from the inconvenient sea
That drew closer
With untimely precocious tides.
A persistent visitor,
It crashed and pounded with a lunar force
That demanded to be let in.

I used to thrust my fingers
Into the salty mulch,
Into the puzzle of catacombs
To pull out handfuls of silt
Crawling and chaotic –
Tiny claws that could not dig through flesh
Bedlam in my hands.
The tickle of nature’s confusion
Unable to swim or crawl
A product of her compromise
Trapped at the edge of the sea.

Photograph of the Comtesse Greffulhe by Paul Nadar

Proust’s odalisque
A constellation of pearls in her hair,
Lilies curling down her velvet spine,
Grasping her waist
Like greedy hands
Releasing her hips
And melting in a pool at her feet.
A Gollum made of crushed madeleines and powdered meringues,
She was a figure of myth and spells
Living until the magic word written at her throat
Was erased
And she would then dissolve
Into lifeless, beautiful matter.
Standing in front of her mirror
Like a dying Narcissus
Her drowning face
Reflected a soft perfection,
A feminine despair
And a silken wit
That rippled like the muscles of a cat
And would have bit me
Should I have tried to reach out and save her.

Nancy Cunard
Man Ray’s eccentric odalisque;
His peculiar muse
Swathed in bizarre jungles,
Haunted by a ferocious mind that provoked and teased
The covetous avant-garde
Like a child that plays with a toy
Until it falls apart.
And when she found its foolish heart,
With her enigmatic intellect
She would crush it.
Her pale eyes, bright and angry
With a bitter light,
Were rimmed with black
Like a mourning card.
Her hands were coiled like animals:
Feral muscles that roamed
Like villages and townships.
And from wrist to elbow ivory bangles
Were poached along the country
Of her wild and untamed arms.

The dissolute moon
Opulent with an immoral glow,
Beckoned from the clouds,
That comely firmament,
As lazy as a courtesan
Prowling in the curled divan
Bought from her soft earnings.
Pale and full as Aphrodite
Riding past Cytherian shores,
Serene in a twilight boudoir,
The moon blinked a louche invitation
And twitched her fingers –
Pulling the tides towards her
Revealing the fish panting in the dark
Where they glittered like stars.

I pulled the blanket around me
A width of sleeping cloth
To use against the velvet enticements
Of the insolent cold.
And I began to feel the living embroideries
Begin to effervesce,
To crawl and whisper across my skin.
The vines coiled into my hair
With green familiarity,
The quilt hummed with birds, animals
And the palpitation of feathers and flesh:
Warming me with their circulation
And thread counts.
Small movements,
Unknown DNA,
Twisted around filaments and fiber
And swarmed into the hem:
The restless margin
Of verbose and lively stitching.

Melinda Giordano is from Los Angeles, California, Her pieces have appeared in Scheherazade’s Bequest and Vine Leaves Literary Journal among others. She was a regular poetry contributor to CalamitiesPress.com and twice nominated for the Pushcart Prize. She writes flash fiction and poetry and speculates on the possibility of remarkable things – the secret lives of the natural world.