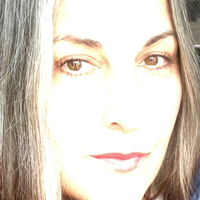 WHY I WON’T SLEEP WITH DONALD TRUMP
by Judith Roney

A surprise dinner for my cousin’s Wharton graduation. Her dad wants everyone seated before he makes his entrance — says he’s her surprise. Trimmed his mullet and the curly hairs from his nose. He asks me to switch seats with him, says he prefers to be at the end.

Reminds me he recorded a video for his funeral, or so he claims. I imagine there will be plenty of David Koch and Rupert Murdoch types in attendance, and a dearth of Roseannes and Teresa Giudices.

Jane, the grad, is thrilled to see him. Her idol. Her meal-ticket. Her fondler.

He stands. Interrupts my cousin at the podium, thanking him for coming, to tell everyone how he helped a black British lady at the bar (he points her out, through a glass partition) with her American citizenship test.

“She was very, very grateful,” he snorfs. Everyone nods. Everyone claps. Everyone understands this man would help anyone who asked.

He moves to the podium, shouldering Jane aside.

“I told her my trick to recall all the presidents names” he says. His arms spread open like a menu. Applause. Everyone’s heads nodding like tripped-out bobbleheads.

Twenty minutes later, slightly hoarse, he sits again next to me, in his coveted place at the end.

I know he expects me to ask him about it. What the trick is. I know that expression. The one like, see? See how I charmed them? How I helped a black British woman? He wants me to tell him what a good human he is. That he is a hero. That he’s a powerful and virile man. That I would like a favor too.

He is not my blood uncle.

I was the late one of the cousins to attend college. Took a while to find direction.

He asks when I’ll be finished with classes and what’s after that. It’s always about the end with him.

No connective buffers, no cartilage. No pain receptors — just bone on bone. I wonder what the difference is between a corpse and a cadaver, and a skeleton for that matter?

After buttering his roll he rests his knife on the dinnerplate and his hand on my thigh.

“I’ll speak at your graduation dinner, you know, when you finish.”

I turn to him, trying quite hard not to let my face reveal what’s shrieking under the skin.

He looks surprisingly benign in the low-light of the banquet hall. Oddly, I think of Lovecraft’s Cthulhu.

The author reportedly said the first h represents “guttural thickness,” and the pronunciation is the closest humans can come to pronouncing syllables of an alien language.

“That’s okay,” I say, “I’m not planning a graduation dinner.”

But his attention is already elsewhere, the pinkish, soft-fleshed hand removed.

He’s cutting his lamb looking at the lady at the bar again. She is large-bosomed and has artfully drawn eyebrows.

He chews the meat wildly, like an animal in fear of losing its catch.

Judith Roney’s fiction, essays, and poetry have appeared in numerous publications. Waiting for Rain won an honorable mention for Two Sylvias Press 2016 chapbook contest. Her poetry collection, According to the Gospel of Haunted Women, received the 2015 Pioneer Prize. She teaches creative writing at the University of Central Florida, and is a staff poetry reader for The Florida Review.