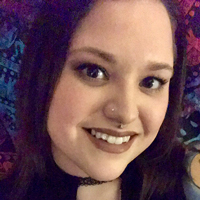 A ROOM FOR TWO
By Cristina Oramas

Sweat made her tight white dress cling to her curvy figure. “Why do you always make me meet you in such dingy motels?” asked Rose. The bed had a thin layer of dust on it that flew into the air when she sat down. “Uck. Even the carpets smell like piss,” she said, twirling her hair. Her face contorted in disgust.

“You know why,” said Rick. He took his jacket off. “Besides, it’s not that bad. Do you want a drink?”

“Really? You never spend time on drinks. You usually just get right to business. Time is money for me, after all. But I guess I can spare a few extra minutes for a regular. Especially, if that regular is you, Ricky,” said Rose. She smiled at Rick.

Rick turned around, rolling his eyes and began making drinks on the barren bathroom counter. One should do it. The pill dropped into one of the cranberry vodkas with a splash. The drink bubbled.

“I just wanted to take a minute to thank you for the last few months. I know I may just be another client, but you’ve been a wonderful distraction while I’ve been preparing for the campaign,” said Rick. He didn’t take his eyes off her, watching her reflection in the bathroom mirror as she made herself comfortable on the bed.

I can do this… I can do this. He took as deep breath and turned to face Rose. His hands shook as he handed her the glass, its contents finally settled. “A toast to new beginnings.”

Rose grabbed the cold glass. “You sure are sweating a lot Ricky. You okay?” she asked.

“Yeah. I-I’m okay. It’s just r-real hot in here.” He loosened his tie with his free hand. Sweat dripped down the sides of his forehead.

Rose placed her glass on the small night stand next to the bed. “Here, let me turn on the A/C,” she said.

Rick swallowed hard. “I just need to sit down.” He put his glass down next to hers.

“The patio actually doesn’t look like a complete dump. Sit outside and get some fresh air while I turn this ancient thing on. The room should cool down in a few minutes,” said Rose.

The patio was enclosed by a tall dark fence. A large tree on its other side provided nice shade. Rick picked the lawn chair that appeared less broken from the mix-matched set surrounding the small table and sat down. Not a complete dump.

“This damn thing is on its last leg. On the bright side, it’s loud enough to help muffle out any sounds of business being conducted,” said Rose. She walked to the sliding glass door. Her large breasts exposed in the sunlight shined, catching drops of sweat that rolled down her neck.

Why does she have to be so beautiful? “Take a seat,” Rick said, pulling a chair for her. It was rusted and covered in leaves and dirt from the low hanging tree.

“Um, no. Why don’t I take a seat here instead? I think we’ll both be much more comfortable,” Rose said, taking a seat on his lap.

“Y-yeah,” Rick said. “So, as I was saying, I just wanted to say thanks. It has been a really stressful time and Marge has been a pain in my ass the entire time. It’s been nice to get away with you every week, even if it’s costing me a fortune.” He grinned and kissed her cheek.

“Haha. Well, everything in life has a price. And I’m what some might call a high-end piece. I don’t come cheap,” Rose said. “And you know the rules, no kissing.”

“Yeah, sorry. I forgot. Marge has been a bitch the last few months. I just miss the intimacy. She wants to be the politician’s wife, but never wants to put out for it in the bedroom. Anyway, that’s why I wanted to talk a little before getting to it.”

“My clients don’t normally want to talk about their failing marriages before our visits,” said Rose.

“That’s just it, I’m not going to be a client any longer. After today, I have to cut ties with anything that may hinder my political career. I can’t afford to be spotted at dingy motels with a woman that’s not my wife.”

“Well then, let’s drink and get to it. I can probably make another appointment by the end of the night.”

“It’s fine. Shit, we left the drinks inside. I’ll get them.” Rose got up, smoothing her dress out over her large behind and stomped inside.

This mother fucker thinks he can just stop seeing me. He promised me Rome, and Hawaii. Jewels. Everything.

“Mine’s on the desk,” said Rick from outside.

“Yea, I see it. Just a second, going to add more vodka to them. They’ve watered down a bit,” Rose said. She pulled a small plastic bag out from her purse containing two pills. Fuck you.

Rose grabbed their drinks and walked to the bathroom counter. She took a sip from hers before adding more vodka to it. She then dropped the two pills into his glass and covered them in vodka. You think you can just cut me out like that.

“You okay in there?” Rick asked, peeking his head into the room.

Rose adjusted herself in front of the mirror. “Yep, coming.” She walked to the patio, almost spilling the drinks. She handed Rick his glass.

“A toast to my future success in politics,” Rick said. They clinked their glasses and took a sip from their drinks.

Ricks hands were still shaking. That’s it, take a sip. Just a si…

Cristina Oramas is currently working on her B.F.A. degree from Full Sail University. She loves to share stories that are close to her heart, as well as share her love of fantasy through her writing. On her free time, she enjoys going on adventures with her boyfriend, and curling up with a good book and her dog.
Linkedin: www.linkedin.com/in/cristithewriter
Facebook: https://www.facebook.com/cristina.m.oramas