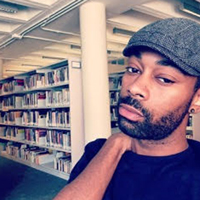 As a stubborn child my father hit me,
his hand glistening black as Afro
Sheen came down like coal-tar
and dyed me blue as a Nelly Queen,
because I sparkled, I gleamed, found my light
in the shade and danced in the dark.

My father spank me on his knee
with an open fist before the Motown,
he shook me down and slapped the music out.
His finger like a switch on my cheek,
he said,

No son of mine will dance limp wristed
Take my hand come let me show you
put them on my waist boy
Don’t be scared!
Lead real slow
Don’t let the woman lead you
Dammit boy!
Move your feet and hips together
no not like that that’s too much hip
Never mind.

He blames my mother because he can’t
believe a son of his would birth such radiance,
he said, little black boys with too much pride
in their hips leapfrog through life
lacking some part.

If he had another voice
it’d be that of a singer
(Could he be twice blessed?)
and sing himself a better-made man,
for being born black & queer.

When he was but a pickaninny,
swaddled, he saw the world
on his mother’s cast-iron back.
When he grew up, the world saw through him
and then the suffering began.
A black, queer body hurls itself
over the very difficult task
of surviving a reliquary of screams.

In his mother’s high-heels he stands
on pillars, praiseworthy, in a looking glass.
Startled awake, his tiny voice
rouses his mother, and her helping hands
steer him down, untying
that ribbon dancing in his voice.

Look now, there is in this body
a voice, I am a Man.


The barber’s stony fingers
inched up my neck—
the tips of them I wanted
to fasten an ache within.

Sprayed off tongues, insults
unfastened to the smoke of Phillies.
I shrunk and overheard the word “faggot,”
as though I were deaf; their words guffawed.

With gestures, grunts, slaps across the lap,
two fathers spat, shaming their kids. Mine,
sat atop his rocky mountain, hard as stone,
watching me roll down in that chair, sinking.

How it must’ve felt to have another man’s hands
at his own son’s neck for the first time?
He sat indifferent, as I shrank
in that leather, unmoved to anchor
in me some rope, a touch

of reassurance, that what I felt
at the length of the chair’s arm,
that bulge behind the barber’s smock,
was nothing to fear.

LULLABY FOR THE WEARY
II.

Now the doctor tells me I got the gout
in my feet too, spent standing spent waiting
on a platform to go home from my night job,
for the train in the cold and rain the shit
I wipe from the asses of strangers.

Just so I can see my children go
a day without begging or stealing.
What work a woman ain’t done harder
than any man? a mother’s feet is as callous strong,
and it hurts just the same wearing new shoes.

Each time this body cries for a little more rest.
I lay down and get up with it. Each day it cries.
For the night’s wide-eyed with live sonata,
Crickets surround this chair and I listen.

THE WEAK REVEAL THEMSELVES

You should play with boys.
If I had of been ‘round
you wouldn’t be this way:
you’d be running
after ‘em girls,
instead of running
way from ‘em.

She’s to blame.
I tried to find my way inside,
so that when you grow up you
ain’t never have to ask yourself
what part of you was missin’.
I tried to leave a piece of me inside.

Football, now that’s a man’s game.
Wouldn’t you rather play with boys
and toss around the pigskin?
A man shouldn’t be ‘fraid
to get hit,
and you could be a runnin’ back
since you like to run
from ‘em girls.

Come sit down, boy.
You hear that? Listen.
This music is the reason you’s here—
this here’s baby-makin’ music:

Take my hand,
Come with me, baby, to Love Land
Let me show you how sweet it could be …

Don’t go blamin’ me ‘cause I wasn’t ‘round.
It’s your mama’s fault,
she kept me from you.
No son of mine…well you know what I mean.

Daniel Jackson, a poet from New York, has received his degrees from Hunter College, New York and Emerson College, Boston where He studied creative writing. His work has appeared on the Lambda Literary poetry spotlight, Calliope Magazine, The Santa Anna River Review, Black Napkin Press, Faultline Journal of Arts and Letters, and other small journals. He was an assistant poetry editor at Redivider: A Journal of New Literature and Art, and a prospective 2018 Lambda Literary Retreat for Emerging LGBTQ Voices Fiction Fellow.