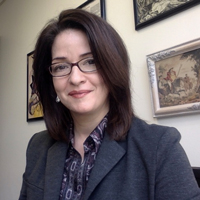 A letter sent from a long-lost lover
Opened with much hesitation trepidation
Unfolding it in thirds and turning it over
Reveals the paper to be blank.

It mirrors the look on my face in confusion
Mouth hanging open, brain upend pendant
Searching the paper for some mark or sign
Some character in palimpsest to give it meaning.

But it is silent, no voice on its surface
Blank like a tombstone, the name eaten by lichens,
Like a sold-out hotel with every room empty
Like the face of an actress in mink eyelashes.

Like the wearied look on the ocean’s broad face
As it bumps the sand on Malibu beach
Like a student’s essay in big looped letters
Asleep on the page and safe from meaning.

Like an old revenant with nothing to say
Resigned to his fate and unwilling to frighten
His haunted house quiet and undisturbed
The Ouija board still, no names yes or numbers.

The letter sits on my desk all night
While I lie awake with my face to the wall.
Listening concentrate close by the paint
I put my cheek to the cool white plaster.

I fold up the letter and put it away
Deep in the socks where no one will look.
The sign on the restaurant says, “Steak and Magic,”
I sit at the bar to wash out my mind.

Is this your card? No, my card was blank.
Lady, there aren’t any blanks in the deck.
Well, that’s the magic, now, isn’t it?
I am waiting to see the one that I picked.

Hollywood calls it magic hour
When purply tufts crawl toward the horizon
Across a sky still specked with blue,
They chase the sun in desperation,
Reach for their beloved as she pulls away.

The firmament lights itself from within
Below are shadows of hulking foothills
And flickering blips that mimic the stars,
Futile attempts trapped in bulbs of glass,
They cannot offer themselves to the twilight.

Phantom shapes and wisps of limbs
Parts of people walking pieces of dogs
Noises felt and sensations heard
Faint light in dim-light barely can see
Nothing until it’s in front of you.

And she saw nothing as she stepped off the curb,
Followed the faded orange arcs
Once bright, now sunk into layers of pitch
Her fingers crinkling a stiff green bill,
Granted from her mother’s reluctant wallet.

Screeching wheels and a long honk horn
Sent her flying, then hard slam down
But in the mid-dusk, in the half-light unseen,
She rose incandescent above the dark figures
That gathered in sadness and shock on the street.

The wind whipped up and wound right through her
Spun her over the hills and dandled her high
Her arms raised up to embrace the gusts,
Her feet kicked out with pointed toes,
And she lit the broad flat stretch of the Valley:

A brand new restaurant with the door locked tight,
A pack of stray Chihuahuas living next to the freeway,
A newlywed couple with chickens in the yard,
A mansion abandoned in a hurricane fence,
A flapper’s bob dyed the color of acid.

A woman would come in an old Dodge Dart
She’d check on it, look in the cracks and the crannies,
Where children’s voices were stacked in a corner
And the sounds of breakfast were piled in the sink.

Where the heavy feet of a father’s work boots
Made a shallow dip in the threshold,
And tiny hands searched over their heads
To jam their fingers in the keyholes.

Where the clicks of a mother’s knitting needles
Tapped between the plastered walls,
And homemade curtains slapped the breezes
That stirred around the hallways.

The woman would step through the weeds on the walk
And yank on the padlock hanging on the door.
She’d send some guy a few days later
To patch the screens where the rats got in.

A tiny LA cottage with its breath blown out
The summertime streams through the rotting eaves.
It warms the face of the linoleum floor
And lights the air with jasmine.

The rooms stand bare and drowsy-still
The echoes in the hallways call out goodbye.
Muffled by stucco and strangled by vines
Its specters gone Back East on the wind.

Gone to float in auntie-bellum parlours
Sing their dirges in long paneled hallways.
Stand at windows gothic in panes
Gauze flutter flying down stairways of marble.

In the wake of the Dart a whirlwind of leaves
Would ride the air then fall to the street.
They rolled in vain but never escaped
And she did not come to save them.

I see the woman once in awhile. I almost never see the man.
They never open the door in the front.
The lights blur low through dull gray glass
Passed through by shadows in the dead of night.

The woman squeezes between the screens
A bowing doorjamb under broken Spanish tiles
Throws her arms around a massive garden
That overruns the back of the house.

A thousand pots in a dozen sizes
Red clay blobs that she made herself
Back when her hair fell in auburn waves
Across her sunburnt freckled shoulders.

She pours the streams of water down
It rises to the rims in uplift drips.
They run across the veins of long wooden tables
Groovy deep with curling paint.

A shuffling movement, first upstairs, then down
Creaks in the floor and a shape on the wall
His pale eye blinks through a cracked single pane
But stays behind the half-hinged door.

Will he step out among the reeling pinwheels
And over the mouldy stoned faeries?
Will he dash to the van out back
That they once used to live in?

Only she hears his gauze-thin voice,
Calling in a tongue they invented together.
She answers with a song Paul McCartney wrote
In the year that I was born.

Thea Tomaini is Professor of English (NTT) at the University of Southern California. She is the author of academic books and articles on monster studies, death studies, and the uncanny in Early Modern Literature. She has yet to see a ghost.