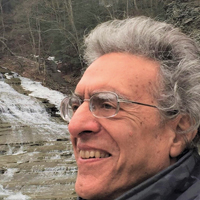 THE PERFECT POEM
By JR Solonche

X is the first letter of the fewest words, one
reason why X is my favorite letter.
X is a person, a thing, an agency, a factor,
etc. of unknown identity. X is the Roman
numeral for 10. X is Jesus Christ, God’s son.
X is the designation used by the motion-
picture industry for films no one under
17 years of age may attend. X is the sign
that kisses you at the end of a letter.
X is the power of magnification.
X is the signature of an illiterate.
X is used on a test to indicate an error.
X is the last letter I write on most of what
I write. X marks the empty spot.

would have to be square.
I probably thought that the perfect would have

to be square because I read a lot of sonnets when I was young,
which, you know, sort of look like squares.

Now I know the perfect poem is the shape of the earth
or of any other body in space whose core is molten iron.