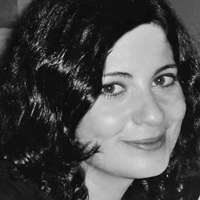 As I stood outside the house, a bottled-down stillness came over me. I caught a strong whiff of mold – sweetened somehow. Soon enough, the door swung open and out came my aunt in a silky red dress which sausaged her into shape.

The tint of that dress looked like blood that had been sitting there, coagulating. Before I could defend myself, I was impaled against those lumps of meat, soft and hot and flaccid. From inside the darkness that enveloped me, I heard a muffled, “Let me take a look at you!”

I felt my face yanked away from her breasts by her veiny hands as she did just that, she inspected my face, lifted up by the chin, then going for the cheek, pinched and shook it repeatedly, “Look at that, so adorable!”

There was no flow to her movements, they went from thing to thing in rapid jolts, breaking at random points. Like lightning, a new torrent of sentiment burst from her body and I received another clamoring round of kisses. Her tongue and mouth were soft and pliable like those of a dead fish. I closed my eyes for an instant, to swallow the nausea that rose with the murky cake I’d eaten earlier – it tasted of detergent and bugs – sending shivers up and around my whole body. I was also beginning to sweat profusely.

My aunt took out a crumpled handkerchief, flower-patterned over anemic pastels, and blew her nose – hard. When she was done, the bulb was livid and raw. In seeing the little wet beads on my face, she moved to bring that same cloth to it, but I caught her hand in time. She snickered at that, “Sorry, darling, I didn’t realize.” My aunt’s house was a refuge where light didn’t enter. Between heavy, ornate furniture gleamed the smiles of framed people, “important people,” they said.

My mother just sat there, looking at the pictures, her eyes languishing in one detail or another, totally content and oblivious to the torment I was having to endure for her sake. The woman’s breasts were deep, two full sacks one could sink a hand in and pull out a gift, a jack-in-the-box of horrors. In blowing her nose, yet again, those sacks puffed further outwards, their sides bobbing up against me. I thought of native Indian women who slung their breasts back and over their shoulder so they wouldn’t get in the way.

I wanted to recommend the method to her. I then smelled garlic coming from the kitchen, garlic and something else, I didn’t know what, and that bothered me, as the two mingled, the garlic and the unknown ingredient, which together joined forces against me. Those big, fat, liquid eyes of my aunt were fixed on me too, they were laughing. They were amused! “So cuuute, and shy…” she said.

“Don’t touch me!” I heard myself say.

Waving her hands up in the air with an “ I give up” gesture, she went towards my mother, who now sat before the piano, ready to dazzle with one of her five numbers routine.

“Ah, leave her. She’s tired,” and as I’d predicted, the first notes of Liszt’s Sonata in B minor invaded the room. It meshed with the garlic and the murky cake from earlier and my aunt’s sacks which bounced in triumphant abandon as they spread on the couch, prostrate and ready to listen. My eyes sought for something to reassure me, to calm or at least distract me.

I felt a little dizzy by then. My aunt’s breasts had done that, I wanted to scream “See what they’ve done to me!” I saw my face against the cupboard glass as the music, which I loved on certain days but not that day, conducted the room. I looked orange, ugly and greasy. The important people in the pictures grinned stupidly at me – every one of them.

Of course they did, they were friendly with my aunt. I had to leave this place! I had to go! I had to escape my murky doom! That it would be murky was certain, I had no doubt. The door, heavy, was not that hard to open. A tiny wave of wind and dust came in, lifting the curtains slightly, so I got out and thanks to the sonata, they didn’t notice me. The music followed as if guiding my movements. But I still ran, I ran as fast as I could while gulping fresh batches of air, stopping just long enough to remove my slippers, and kept going towards the beach.

Behind me I envisioned that dust, the little that it was, breading my aunt thoroughly so that when she went into the kitchen, she’d be mistaken for an extra-extra large fillet and thrown into the skillet. Like bacon, she already came with the fat. At the hem of the beach, which also reminded me of a skirt, I wiped my face off with the back of my hands. Finally! I sat with my feet skimming the water’s surface, and cupped my hands to grab as much as I could from it.

I needed to extinguish the rest of what was left of that sickening aftertaste of my aunt’s breasts and that warm saliva in the jar that was my mouth. Unable to contain myself, I vomited, my body away from the water, as all the repugnance resurged in me and from me. I could feel the wind bringing some of the vile bits up to my face as if to force me to register what I was doing. I opened my eyes. Below, the water looked strong and sure of itself. But its strength was just barely contained, one nudge away from an outpour.

My legs found their way to its cold, taut depths which pricked my body in a thousand points as I let myself in. It was then, and only then, that I began to feel better. I ducked my head in and swallowed a whole mouthful of salty, salty water. And in remembering I had been told not to do that, I did it again.

The murky taste was now effectively gone. The water was now calmly accepting me, and I aligned my eyes to its line, which was now and then furrowed by the wind. I saw the multi-colored line clearly, clasping my gaze.

The sun slipped through the clouds and fell like electric gold. The water had no breasts; it had wings instead. And suddenly, I felt something blowing against me.

It was something intangible and certain coming from the water, from the water and from the taste of it on my tongue. I felt calm, strong in a way I hadn’t been before. Ever, in fact.

I recalled what mother had said yesterday. That I was a strange, strange girl.

I brought my hands to the surface, and saw that the skin was now puckered – pruning, isn’t that what they said? More like raisins, I corrected. With a little jump, I lay back on the water, letting it catch me and prop me up as I floated in place. I was still happy in that odd way. And it was then that it came to me and I understood that she was going to leave me to the ocean, to trust it to care for me. Officially, it would be that woman, that aunt, who would be doing it. But it was really the ocean.

Mariana Sabino has been published in Rue Scribe, The Humanist, Seven Circle Press, Mediterranean Poetry, Up the Staircase Quarterly, Dogmatika, Culture Unplugged, and Taste of Cinema, among other publications. She has lived in many countries, imbuing her fiction with the atmosphere and experiences of navigating through different cultures.