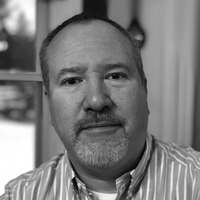 THREAT OF RAIN
by Brian Stumbaugh

He slides her the yellow nylon scrubber, a soapy mesh lemon in his hands, slick in the luke warm water.  Their fingers entwine for just a second, then disengage.  He pivots his hips behind her and squeezes her with his upper arms, his hands covered in bubbles.  “Thanks,” she mutters, exposing her tanned neck as he nestles against her.

“Reminds me of Martha’s Vineyard.”

“Mmm,” she smiles, scrubbing the non-stick skillet, pieces of chicken dropping into the sudsy mass.

“Why not?  I’ve got the time coming.  You can get off.  The kids are old enough to stay here.”  He pushes his hips against her.  She giggles.

“Why?”  He pulls back a bit, but her head is still on his shoulder, her neck stretched in front of his stubbled jaw.

“Hey, guys, what’s going on here?”  Virginia slips into the kitchen, her green backpack hoisted on one shoulder.  Tom retracts his hands and wipes them on his shouldered dishtowel.  He notices her white mini skirt and snaps the towel at her exposed thigh, eliciting a squeal from his daughter.

“Don’t you worry about that, Gigi.  Married people still do this romantic stuff, too.”

“It’s OK, Mom,” Virginia says, popping open a Coke and leaning against the doorjamb.  “I know you and Daddy still, you know…”

“Virginia Katherine!”  Tammy says, reddening, unable to suppress a frown as her daughter scurries out of the room.  Once upstairs, her bedroom door shuts, and Tammy turns to face Tom.  The “Jeopardy” theme plays from the television.  She whispers,  “I don’t think it’s a good time, that’s all.”

“Why?” he repeats.  Tammy hushes him with a quick hiss and leads him back to the sink.  Shielded from the living room, the glow of the television bouncing off of the crystal vase on the breakfast bar, she pulls him close.

“What about her?  School? She has all her tests made up, right?”

“Lay it on me!”  Tom cranes his head to hear his son, but his eyes are still locked onto his wife, who has turned back to the dishes.

“Quarterback who led the New York Giants to the 1955 Football World Championship? “

“Hang on.”  He glances again at his wife’s hair as she scrubs at a dinner plate.  His eyes roam down to her shorts and he smiles.  “Got it C-Man: Charlie Connerly!”

“Tammy, what are you talking about?”

She turns, wiping her hands on her denim shorts, looking into her husband’s face.  “Two things:  First, Erika Thompson called me last week.  She said on her mid-day bus run for the kindergartners she saw Gigi running up the hill from Main to McCullough.”

“Midday?  What was Gigi doing here?”

“She said that she had to run home to get her English paper.  She said that Carrie Wilkes gave her a ride home.”

“I checked her room.  It was a mess.  There were muddy footprints up the hall, and her bed was a mess.  It looked like someone tried to straighten it, but it was still messy.  Jesus, Tom, she doesn’t need to get caught to be guilty.”

“Yes. She said she wasn’t upstairs.”

“Shit, Tammy.  Did Erika see anyone with her that day?”

“No.”  She drains the sink.  It makes a loud sucking noise that drowns out the Jeopardy theme music.  She shakes her head.

“I don’t know. She’s not telling me the whole story.  I can feel it. You know I hate that.”

Tom pauses and listens to Alix Trebeck belt out the answer to Final Jeopardy: Y.A. Tittle.  Chris throws himself back in the armchair and shouts a sharp, “Dad!”

Tammy has started drying and stacking the dinner plates neatly in the cupboard. The silence sits between them like an ocean.

“Shit,” he says, so low only she can hear it. He has, unbelievably, not seen this coming. “This isn’t about Gigi, is it?”

She pauses and looks at him with a sidelong glance.

“Whatever you say, Tom.” She pauses, looking out the window. “Your daughter claims she hasn’t been lying, but I don’t believe her.”

“Did you believe me?”

“Of course I did.  That’s different.”

“You’re my husband, Tom.  She’s our eighteen-year-old daughter.” And then she says, as an afterthought, as if it were obvious, “Teenagers lie.”

“No,” she says, finishing the drying and moving on to the next day’s lunches. She is spreading peanut butter on neat rows of slices of wheat bread, her back turned to him.

“OK,” he says, shaking his head and heading for the garage.  He has to mow the lawn, which has become weedy. So much rain lately. He hopes that he can finish before the storm that has been threatening all day moves in.  Behind him, kitchen noises blend with the “Wheel of Fortune” theme.  Upstairs, unreachable, his daughter has turned on her stereo and blockaded herself.  He is on the front porch thinking of hot tubs when he is pelted with thick drops of rain.  Thunder rumbles like a distant warning, driving him under the eaves and out of the rain.  The storms had been bad lately, one after the other. At this rate, wonders if he’ll ever be able to escape the rain.

Brian Stumbaugh is a writer and English teacher in upstate New York where he has lived, in various configurations, with his wife, four daughters, three dogs, and two cats. His work has appeared in Arbutus, the Square Table, Antithesis Common, Stirring: A Literary Collection, Black Denim Lit, Flash Fiction magazine, and Dime Show Review.