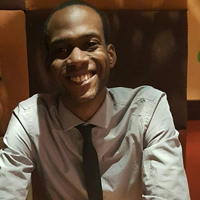 A HUNDRED PENNIES
by Christopher Major

Sundays are usually reserved for cleaning and nothing else. I’d made up in my mind that anything worthwhile happened between Mondays and Saturdays. It was this Sunday, however, that had gotten the best of me. I’d been thinking of shows I had to catch up on, my last living  grandmother to visit, and a younger brother to check up on to ensure that he hadn’t gotten as intoxicated on freedom from my parents as I did at twenty-one years old. The washer had stopped a full two songs ago, but Ice Cube’s “Good Day” was so good to me that I had to replay it. It made me wonder exactly what made a good day for me. Sure the weekends were good—late sleep, nowhere to go or be, whole days at home with forgotten hygiene—but would they really qualify as good days? Since my financial independence from my parents, and consequently my absence from church in the morning, Sundays had been treating  me unreasonably well (Sunday deserved a better version of Christopher, I must admit).

This Sunday was intriguing because I was to be paid a fraction of what I believed my time was really worth from my job that Monday, and money had been tight for a week. Just as the IRS would take a cut of my money, so would my landlord, the power company, and the guy (or gal) who owned the gas station that never gave me enough gas for two and a half dollars a gallon. My nicotine addiction was telling me it was time to resume the lifelong suicide mission when I found a washed, wet dollar bill hiding under clothes that were clean but not yet dry. It was all I needed to get a Black & Mild cigar from the same gas station that fueled my car. After digging my coloreds out of the washing machine I looked at that dollar, it being crumbled after having survived a spin cycle that would have surely torn my frail body to pieces, and remembered how many times I’d found myself in this position—a day before payday, just trying to light and inhale certain death.

That moment was a good day that proved to me that not all good days are created equal. I keep a change jar in my bedroom that I use to empty my pockets when I get out of my clothes for the day. I’d once had ninety-nine cents worth of pennies in that jar and would spend the rest of my evening avidly searching for just one more, only to find it and feel like I’d slayed a dragon that day. No, that dollar bill was good, but it didn’t compare to the satisfaction of knowing that I had to scavenge for one cent in order to pay for my untimely death. That dollar asked me, as it drowned in laundry detergent, “Does one really big joy really equal one hundred small joys?” My Sunday was ruined.

Change is pesky, and weighs down your pockets, but always makes the world of difference when we checkout at the grocery store or at a food truck. I unraveled the power cord of my vacuum and thought about how much copper I’d just  disregarded and vacuumed up throughout my life, and couldn’t help but wonder how many dollars I’d sucked up and thrown out with the trash. It seemed like the big joys were always worth savoring but the small ones weren’t good enough until enough of them had been accumulated. The Saturday night before I had gone to a local wing restaurant and ordered a two piece whole wing and one piece catfish combo (it’s always cheaper to get the combo). The restaurant was supposed to close ten minutes before I walked in. The cashier was irritated with my timing and I could tell—as was the cook. She was a plus-sized woman, and the sweat from working so close to the kitchen made some of her black hair stick to her forehead. The cook was tall, bald, and had a patchy salt and pepper five o’clock shadow. He was also missing one of his front teeth. My untimely arrival worried me. I assumed I’d get home, open my to-go-box and find my food undercooked. Instead, when I sat down on my couch with my salt packets and hot sauce, I discovered that the cook included two extra wings and an extra catfish. That was my shiny penny founds heads up on the pavement. The preceding Wednesday I got a call from a prospective employer offering me a job that paid me exactly what I felt my time was worth. That was the dollar bill that fell out of my dirty jeans pocket. Those two joys, both valid on their own terms, made me think about the change under my couch cushions, and the paycheck I got bi-weekly, and about which one made me the most excited to see. I had to admit to myself, between vacuuming and picking up items too big to be sucked up, that a well timed penny beats finding a dollar on all days, not just the good ones.

Change has also never been big—merely tiny steps in a different direction. We generally dislike coins, and our partners, parents and, well, anyone we’ve grown to learn truly does care about us, have a nasty habit of dropping pennies all over the place; and we, ever in search of that whole dollar bill (usually without the sense needed to understand what they tell us), spend quarters of our lives with an even nastier habit of throwing them away, only to stop on a dime and appreciate them once we needed a hundred cents. The currency of growth is indeed change—and my growth has only come in small, incremental steps. The pennies we get, I’ve found, seldom come as shiny, new Lincoln’s, instead as the tobacco ash covered, sticky, rusted pieces of copper that are the criticisms we all disregard and deem worthless. The problem with only having eyes for the dollar bill is that we’ll, all too often, throw out more dollars than we find and end up with a broken vacuum. All things considered now, I’m two cents short.

Christopher Major, a native of Birmingham, Alabama, spends much of his free time recording platinum selling Hip Hop albums in the shower and his car. Much of his work deals with race and class, and he’s currently working on his book, “Porcelain Musings”.