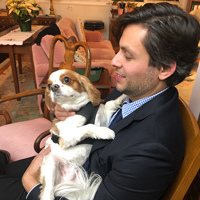 What remained couldn’t be salvaged from the shipwreck of my immobility.
Climate change. Father warned me don’t dive deep:
Wake before you go to sleep, migrate in the afternoon
Read Borges, Neruda, mostly maybe Los Cantos de Lorca,
we migrate. Don’t own a little nest-infested barn,
Don’t sit all day, writing spiritual poems,
like a Barn Owl, while the barn burns,
ambiguous as a lung, lost like a bleached Ghost.

Speak, memory: I do not speak Spanish,
but I am Spanish. I maintain the right to not
be forgotten. A twilight I own despite my own
secrecy.  The danceable tapestry: fiestas, community,
in the garden of joy imagined far-off
within the untimely, the dead lose no blood,
the untimely are kept in corners, cut-off,
wakening, in me sits a mud jar of empathy

for others who have lived the opposite of fuel
and entropy.  There is no justice for fourth-generations
white ceiling meets the late bloom of light,
familiar as the progression of longing,
here is the opposite of love, the sharp shrill of hate,
the imagery: olives in my pocket, a mule,
valiance and folk songs of death, in Andalusia,
for those mired in the hours of love and ballad of light.

After the divorce, my father returned his books
to the library, in Spanish, left His-Panic, a terrible leap
across the country, a grace to change the white ceiling,
and leave behind no history, a homeland of books like a wound,
only meager beams of light from his car: his vehicle
could never pass the emissions test of time.
Little Barn Owl, fire or not, it was rude to ignore you,
What remained after the smoke cleared: all shades of music rung.

The land is a swash of monotone:
cobwebs against yellowing barns, seed pods
off rusty fences. Being a magician the setting
dulled the senses. Nothing to pin the astounding.
No image to bind the glue that made life from
Death. Pulled a parent fox family survival from
The carnivorous sleeve of stripe ribbons of roadkill.

Give me: dog ripping leg on gravel road,
Give me: wolf on fire trail that circles a valley.
You see I heard dogs travel in packs, at night.
You see I heard undomesticated baying at
the rough horizon, voyagers of mongrel order,
they plunder the uninhabited, they live somehow
without our living, like a hound on the trail of a hare.

They tear a shrew from its hole, or like an Orca
flip a seal pup, head-over-heals in the supple light.
Buddy, the black lab, has proudly returned home,
And proudly struts along the avenue, gangster-like,
Head cocked, half-awake and half-asleep
down the avenue, jaw clenched over a wet mouse.
Buddy, listen up, predatory dogs are not welcome here.

Buddy, only mate at night and do not disturb
any of the familiar faces that make up the townsfolk.
Buddy, you are not a regular visitor.  Lower your music.
Buddy, each year I have come here, you are not here
but wandering the harbor less hills: drinking, cheating, killing
in the lot behind the high school gymnasium
near the torn-up mounds to the north.

Buddy, I saw you once. You and I are some kind of undead,
like mutts washed up in some quarry to the north
up a peak, behind the back of the sun, no help
from Mother Earth:
You see, Buddy, sooner or later a rumor will start
that you or I may have come back
as a mountain lion.

1.
Tower (v.) to passively stare in awe like reverence

Of a white pastoral: all is invigorating
And crystal at the lake, two boys back float prone
the reflective depths: from the eye’s blue zenith,
past the lake-scapes, there is no color, nothing fowl

Just two brown trout, and the snap associated
With a turtle nipping at the under-toe
From divers, white like the monotony of bone,
Sand at the lake’s edge, salted and blue,

The last of the vacationers have made a nimble
Rift with the water, chilled the vibrant shone,
You don’t belong here, the beach umbrellas cracked,
A band that flaked in the sunlight, hauls beers home.

Self-portrait in an othered landscape,
At noon the swimmers sprint, curling fingers and wrist,
Piled up in the dune high, brackish brown catfish
Accumulated in the sun and silt, shored against skeleton.

Tow-her, (n.) to make believe to feel, not steal

All is crystal and invigorating at the lake.
Across the beach I don’t belong here. In shallow sport,
An osprey laments the lack of deep dive by shiver
In the wind sheer for an impossible fish.

A while back the sunlight entangled the brown land,
Someone invested in an abstract perfectionist portrait
The spotted bejeweled damselfly, mistaken for a bloodstone
Jasper stone, the grueling violent survival just

Beneath the clean flows, the coldest darkest sprouts,
Like fuselage from the seams, the surface brims
With the sounds of police cars at night, high rise city,
And watch out the window for a wisp of wind

Welcome back the pastoral sophistication
As music is to the cold eye without pity,
These filaments are not corner dealers, kids wanting
No more than to plumb depths of life upward to the sky.

Of a white pastoral: all is not white pastoral.
nothing is crystal and invigorating at the lake,
we watch as the kaleidoscope became bity
a simple careen of fuselage in the elastic tide.

But there are crustaceous things: pink oyster half-devoured,
Feral cats sing propelled by refuse in swelling tide,
The brackish water is a public works experiment,
An urban gift to the cascading highway projects out the city.

I have no use but for granite, or inert signals
But a morsel remained in the dry sweep, a music will echo it
it is I that have made it out of existence, no pity,
I am not a blip, a blemish, a confusion on the white scape

Indeed, this crack will become a more serious fissure
Mounted on the angelic weather, white cascading
Puddles mistook for cloudlessness –swiftly
Clouds exist: they are recorded in the broken tower.

The hand that fell the trees, which ripped up gardens,
and at the same time assuaged me from late bills, evictions,came home empty handed with holes in its shoes, was not bought
by doctors on cape cod or made by fireplaces on wall street –

it felled when we recognized its false conviction: the sea unsounded gave peace.

To head out at daybreak
to make the rout easier
hunters, maybe men, grizzled
and huge, abolished maps for

large steel tents, deep in petrified
forests in the North, calloused hands
hung onto the rifles and gun powder
and stood on cliffs that protruded

out into the abyss. They have hunted
in despondency, with sorrow over lost
wives and sons, they have lost money
on football games, by the crescent moon

and smelled of cigarettes and plaid, to poke
heads into the rabbit-run, by love
and fear whistling for the first rabbit
of spring to stare out of the confusion

neither to suffer or die, but to see
the twitching of ears in the eyehole
and wait beyond duck blinds and share
stories of conquests and lies in Polar

Ice Caps, jumping between volcanoes,
High school knee surgery from lacrosse
And not the least part to keep a record of
Rabbits shot, in the vanishing green

For them, standing on the threshold,
The hardest part, is how small and pure
That feeling is: to spoon a bunny and kiss him.

About Lobster Rolls and Creamsicles: they
resembled a dinner party drive-thru,
an everlasting purge for little children
a permanent vacation
the scarab-beetle-black Harleys

the out-of-towners, the fried shrimp boats
with onion rings, rhubarb crusted cobbler,
a clam burger with tartar,
you could have called it: yuppy
postcard, Lobster Shack and Root Beer, Cape Cod, circa 1999.

Unto you, fried rolls are not sin.
I let Puritan friends locate my origin.
I used to tell them: I cannot locate
my origin. A red-headed teenager (pimples)
blasted orders from the mollusky balcony,

we were all visitors back then.
Gulls carried the scent of fried-smelling,
Rough-sounding, wearied, like tortoise-
Rimmed doctors on vacation, patrons
Of the symphony. Does your family speak Spanish?

The caws in the parking lot
was the riff to She’s Got Legs.
We went from one weekend to the next,
the secrets we kept, I could not fit in,
from a movie like Uncle Buck.

Let me know when your parents get back.
I will write to them, on a postcard
I found chasing other postcards
through the parking lot.
I will exit by spaceship, side-scrawled,
Not from here: and make my way back

To an unassailable place.

Jonathan Andrew Pérez, Esq. has published poetry in Prelude, The Write Launch, Meniscus Literary Journal, The Florida Review Aquifer, Panoply, Paradigm, and was featured in Silver Needle Press’s poem of the week. He has forthcoming poems in Yes Poetry, The Westchester Review, Watermelanin Magazine (for writers of color), Cold Mountain Review in the Justice Issue, and Swimming with Elephants . He was a finalist in the Still Journal Poetry Prize and for the Raw Art Review’s Walt Whitman Prize. Jonathan is selected at Cave Canem for the Fall 2018 poetry workshop. Jonathan is in the process of completing a chapbook, “Dispatches from Flight Calls Over White Pastoral.” Jonathan started his career as a “poetry-editor intern” at the Atlantic Monthly.