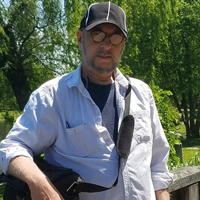 I BARELY ESCAPED WITH MY LIFE
by Louis Gallo

“I BARELY ESCAPED WITH MY LIFE”

The lacquered reporters declare another miracle
as we now deem the merest rosy swerve from doom
a glittering token of divine twitch.
Minicams pan the charred fuselage
with highly resolved devotion,
zoom slowly upon a shadowy figure
who emerges from the sizzling wreckage.
I barely escaped with my life, she exclaims,
the lone survivor, a Civics teacher,
early forties, dazed, someone you won’t recognize,
always one of us, already losing the battle,
though she clings to her plaid overnight bag
and looks intact enough but for patches
of sooty rouge baked into her cheeks.

But who is this I who escaped and with whose life?
Is “I” separate from the metabolic stew of hormones,
enzymes, corpuscles, protoplasm and pulsing jellies?
Suppose she had barely escaped without her life —
returned to Bradley High in the swank part of town,
its antiseptic brick and quicksilver windows,
computers in every class, perfumed kids
with names like Misty and Sean, driving
Volvos and swollen with the yeast of good luck.
You know their elegant uptown mothers
who can’t give up leotards or Merit ultra-lights,
an hour at the spa before cruising the coffee shops
for lavender tea and heavenly cream puffs,
the boutiques and Langenstein’s,
a sternly Caucasian grocery with exotic delicacies
like chocolated ants and rum bon bons
exquisitely priced to make one feel perfect.
So troubled their lives, what with Misty pregnant
and Sean howling as he shoots spiders in the attic . . .
who could begrudge the Prozac, the martinis?
Lives worth escaping or heaven on earth —
that is, the best it gets in this hive?

Their children, languid clouds of resentment,
file into school corridors that reek
of puke, Tampax and leathery old sweat.
Moon-faced, they stare at the wonder
who stands before them with new assignments —
Mrs. Xnitious? — on the civics of the soul,
the cartography of beatitude
and ecclesiastics of the bardo.
Will it be on the test? they want to know
before it’s back to scratching emery boards
and blasting heavy metal into gray matter
that took a million years to evolve.

Mrs. Xnitious — we know her too now —
drifts from desk to desk with the glow
of a bodhisattva shorn of flesh and desire.
She is everywhere, here in room 202,
in Yukon forests she has always longed to visit,
hovering at the rim of the known universe
beyond which lies a sea of pure radiance.
She has side-stepped time and place, suckles
at the breast, slouched in study hall with Cosmo
hidden under homework, stands at the altar
as Mr. Xnitious slumps over a steering wheel
ten years later, feels the plane begin to vibrate
and rip to shreds before it crashes,
staggers out again to meet ravenous reporters,

I barely escaped with my life

wears the face of each student from birth to death,
howls with Sean, lies with Misty on a cold stainless gurney
as blood and a ghostly infant crawl down her thigh,
squeezes into a leotard and giggles over tea and brioche,
feels Mr. Xnitious penetrate, his breath labored,
sweat dripping into her eyes until that final shudder,
strokes his cheek in the open casket, no longer merely wife
but mother as well and daughter, unsteady on her feet,
on their feet, the feet of all who have barely escaped
with our solitary, grievous, sundered, beautiful lives.

The Mexican window washers banter
in Espanol while dangling five stories up
by two ropes each, buckets looped
to their belts, wash rags flaring
out of their pockets.  I can’t quite hear
what they’re saying except for a word
or two.  I’ve drawn my shades
and can see only their silhouettes
as they squeegee the glass—each window
(I have two) about ten by eight, five
stories of them on this wing alone of the edifice.
They will be at it for quite some time.
At the moment, two of them sway
outside my shades.  I catch the words
“Hernando” (Cortez?  DeSoto?) and “manana”—
Hernando, Manana!  And Montezuma dead.

Inside I advise a student that she must,
despite her repugnance for mathematics,
sign up for the basic course to fulfill
General Ed requirements.  Then I trek
to the bathroom.  Then I write this
as the workers still sag off a side of our
massive office building.  I wonder what
they’re paid and hope it’s a thousand times
my salary.  I may be suspended from the edges
of my psyche, but you couldn’t get me out
there, outside the windows, in the air
penduluming like a plumbob, for a clean million.
I remember long ago a drive-in movie
about Egyptian slaves being crushed
to death as they slipped while rolling
monstrous stone slabs on shaved tree trunks
to build Pharaoh’s pyramid, an inert
triangle splashed with blood—such that
the mighty and the lowly commingled
in the afterlife.
The workers now sit cross-legged on the grass
eating lunch, laughing, bantering, good-natured.
Soon they will return to risking their lives
to scrub clean a gargantuan rectangle of glass
for another kind of Pharaoh, an abstraction
cold as Tut and his eternal doodads.

THE NIGHT I WAS SAVED, ALMOST

Last night a band of squeaky, dusty angels
(which at first I mistook for gnats)
arrived with news of my salvation.
Ah, the splendid au revoir at last!
Their leader assured me that no strings
dangled from this package of good fortune.
I passed, he said, a test I didn’t take.
How professional, mused I,
and called Marie at once.

Today, I don’t know . . .
I’m still here, pale, destitute and sad.
I’d always thought great events happened elsewhere
and in different clothes.  But see, the same
trembling hand wipes the same hardened crumbs
off the same cracked table.
And the old sun spits a lethal dawn
right through my windows again.
If anything, I feel worse, more vague
in the throat, and my eyes have moistened
with sentimentality.
No yeast-like rising, no ballyhoo
among the relatives I’ve notified,
no telegrams, bouquets, no cabs –
and Marie, she’s left me for a less righteous man.
I’m betting, though, with my last dime,
there’s more to this than redemption.