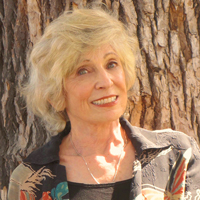 A candle, held up to the unknown
to fathom, or to pray against, what darkness holds.
A lighthouse searchlight,
reaching out to assess the terrain
and find, in all that is, the similars that only seemed
by dint of matter, separate and apart.
A shard of jagged lightening
The quickest flash of truth, so naked you cannot stand
to stay and watch for long.
And in the heart of a song-drenched lover
that moment
the curtain of clouds relents
and, just before it sets, the sun is freed to nearly blind us and
certainly to dazzle us, long enough, this time, for the
senses to stir, for the echoing heart to reverberate,
for the rich, orange spell-glow of late afternoon,
the day turning the corner and,
almost unwillingly shifting to a dark blue
in which the waters blacken
and the celestial lights, always there,
become visible,
A poem can be that moment,
that golden light that keeps us warm
through long and lonely nights.

Portrait of a Man Lost in Love

I once knew a man so in love with his woman
that he carried her photo,
with her and without her.
Whether she was near or far, the prize never vanished
but held dear, by heart strings, kept close to his sight.

Even when jointly they went on their travels,
the same trip, the same train,
the plane with the arm rest up, holding hands,
she was never
out of his mind,
you might say.
Sleeping together in a bed far from home,
he’d prop up her portrait on the night stand beside him.
So that facing toward her or away from her
he was always seeing his love in the flesh or in a frame.
And in his sight she was his treasure.

I knew this man and his odd, sweet secret.

Did anyone else guess that the attaché case
he carried with him to dinners out, lifting a glass to toast
the host
or to offer an anecdote to cause delighted laughter among his
own friends and admirers
Did any of them guess—
as his elbow touched hers reaching for the bread,
as he allowed his glance to fall on her face mid-story or between the salad and the flaming dessert,
or when she excused herself to go to the ladies room and his eyes followed her
like a calf half-desperate for his mother,
—that the framed trophy never left his side?

I wonder, now, what he’s done with that
artifact.
Now that they’ve gone their separate ways.

Like the loud clash of cymbals that stuns the ears,
Words in the mouth began to burst with raw flavors.
And people began to notice that the act of speaking produced
A new medical condition,
Instant Verbal Reflux.

True words tasted clean, a bouquet of herbs, perhaps. Minty, cool.
Kind words tasted sweet, a treat to tongue and ear.
You know the rest, of course,
why it is a
threat to have to eat your words if they are
poison darts not cupid’s arrows
if they come from the bowels instead of the heart.

And so in the days of that followed
Some people began to walk from here to there, hand over lips
Lest what they say might fill their mouths with bile.
Some became wiser, some more silent, some growing accustomed to
Bad taste.

Judith Simon Prager is an award-winning instructor in the UCLA Ext. Writers’ Program, author of several non-fictions books, most notably co-authoring The Worst Is Over: What To Say When Every Moment Counts and most recently the novel, What the Dolphin Said. She is an international speaker on the protocol, Verbal First Aid, training medical professionals across the US and around the world in how to speak in medical emergencies and crises to set a course for recovery. She is married to the poet, Harry Youtt, and has a private therapy practice in Los Angeles, CA.