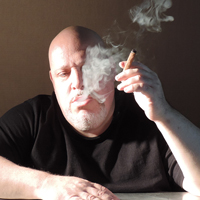 then I’d fall backward into my own
freshly dug grave

Born Coney Island, Brooklyn. Sugar Tobey is the editor of Modern Poets Magazine. His own work has appeared in many publications including Bangalore Review, Indiana Voice Journal and Coldnoon. His new book, “Two Girls Make the Train” with artist Hiro Kurata has recently been published by Biondi Books. He currently lives in New York City over a pizza parlor.