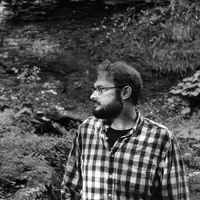 HUMAN BEING
by William Welch

“I’m not Rumpelstiltskin,” I said, joking,
then realized how apt it was —
that malicious imp coming nightly
to anguished girls, promising to spin
straw to gold, but for a price.

Imagine if he used his power for other ends,
if he set broken bones without casts,
changed old tires to loaves of bread,
or melted bullets down to water —
how full would wells be in Syria,
how much blood spared?

But, I must consider my own actions.
Haven’t I made selfish bargains?
And for all my one-sided loved,
how justly do I deserve the name
— Judas.

Four men, after twelve hours of work,
sat down with bottles of beer by the lumber pile
where ants all day had outdone their labor.
The youngest, while the older carpenters talked,
saw a gang of ants struggling in the dusk,
carrying off the carcass of a bee.

It was like watching men move an aeroplane
from a hanger, one of those wooden ones
used in the first world war: rickety things,
flying against the laws of nature,
and on their backs, absurd pilots
showed the wind their teeth and dared
birds to race them toward the sun.

The ants, who lost their wings,
were stealing them back again.
They hauled the bee forward, its rigid body,
striped with dazzle camouflage, unwieldy
on the ground.  Its eyes, even lifeless,
seemed to realize where it was going.

“Look,” the boy said to the men.  His foreman quipped,
“Now they know how to work,” and that was all.

William Welch grew up in Central New York. He’s been fortunate to have traveled more than he once expected and has lived in Brooklyn, NY and Houston, TX. He has done a wide variety of work, from assisting the emeritus director of the Film and Video Center at The National Museum of the American Indian, to learning carpentry. Currently, he resides in Utica, NY, where he works for a community arts center called The Other Side, editing the organization’s literary journal, Doubly Mad. He is also studying to become a registered nurse. William’s poetry has appeared in Pudding Magazine, The Dr. T.J. Eckleburg Review, Denim Skin and, most recently, Belle Ombre.