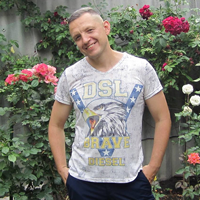 You live in me.
Every morning you come to my eyes
From inside my head. They look like French windows –
Their clear cast glass extends down to your feet.
You stretch yourself on tiptoe and look out
At the green, breathing waterfall of the new day,
Staying yourself.
You stare at the well-known but unfamiliar world
At the city waking up in lilac pebbles…
I’ve given you a bright drop of immortality,
I’ve let you live in the red forest of my heart
like a bird of prey,  tawny owl…
–
I used to kiss you,
Inhaling the sweet smoke
From the clay mouthpieces of your breasts.
I absorbed the brackish essence
Of your translucent clavicles and neck.
My fingers rubbed the moire glow
On your shoulder-blades.
I held your consciousness
In my hand like a fluffy dandelion.
It was enough to blow tenderly in your eyes
To puff away all your seeds
And send them slowly waltz around the bedroom
Like a thousand and one swan needles…
After that, we used to sleep, hugging each other.
Sometimes I started in my half-sleep like a fridge,
And you gently stroked the nape of my neck.
Our flat was ropy with wires.
It needed a renovation
Like a poor fakir needs
A new basket for his dancing snakes.
We didn’t have either a magic fish capable of granting wishes
Or even the sea,
Only a monumental view from the window,
Looking like a (removed by the moderator.)
–
I was a kid inside a ship,
And you were my mysterious sea.
I fought against the light of your candle;
No one wanted to give in,
To lose to the scalding darkness growing between us.
I whispered “off”,
But your love glowed softly.
Little by little you were becoming a part of me;
You nestled inside my brain
Like a blade nestles inside a pocket knife handle,
Like the rib outgrowing Adam…
–
My love,
I’ve become a hostage of good habits
I’m plagued by the universal hunger:
Everyone I remember becomes me.
We find the extension of our soul
In a worthless stone found on the seaside,
In a woman, in an idea, in a tree or a theorem,
In a rural dullness, in the thickets of science,
In the eternal, glimmering orchards of art,
In the tiny warm palm of a baby,
In any other straws we grasp…

Dmitry Blizniuk is an author from Ukraine. His most recent poems have appeared River Poets , Dream Catcher, Magma, Bombay Gin, Press53, Sheila Na Gig, Canada Quarterly, Palm Beach Poetry Festival and many others. He is a finalist for 2016 Award ‘Open Eurasia’, ‘The Best of Kindness 2017′(USA). He is the author of “The Red Fоrest” /Fowlpox press, Canada 2018/. He lives in Kharkov, Ukraine