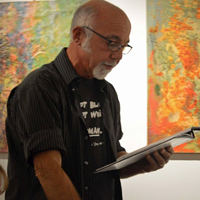 SWIMMING WITH PICASSO
By Mike Jurkovic

We Will Judge Angels

We will judge angels
and consider ourselves
the best among them.
Lengthening the ruse of years
by that much more,
that much more.

We will judge angels
and the consensus will tilt
in our favor.
Igniting the fuse
by that much more,
that much more.

We will judge angels
and abide by the ruling
only if. Only if the plaintive
refuses to speak
by that much more,
that much more.

We will judge angels
and never know the truth
inside mirrors.
The verity skewed
by that much more,
that much more.

The manic gulls of Liverpool

The manic gulls of Liverpool
implore their Reds to triumph.
Alert the cops to wrong side parking
Tweet, twonk, doo dee doo.
Carry the news. The hymns of St. Luke’s.
Herald the garbage men.
Welcome, wheel, and bid adieu.
Drown out the reconstruction.
Proclaim the reconstruction.
Laugh like children. Cry from the fist.
Sing choir. Go solo. Echo the homeless.
Live in the limelight. Dive bomb nuns.
Steal your lunch, your budgie.
Browbeat pigeons and small dogs.
Mimic our rudeness. Our crude dialect.
Joke of extinction. Watch us thicken
w/hungry eyes.

Swimming w/Picasso
was all fun and games
until he bled can’t swim
in stone. Neither could I,
I chiseled.

Shipwrecked cur that he was,
he set fire to the beach, leaving me
my own ardor; a more corrosive estate.

Student no more,
I bound my sailcloth
and left him his wreckage,
cursing the tide. Missing the boat
he could never command.

You seem to be
in every song. Fixing the soup
w/a flurry in your step and a glass of wine uncorked
while climbing the cliffs of clarity,
only to pee over the side.

Songs from high school and college
that we wouldn’t sing together
till we were full of years
and the things that fill them:
The commotion of tears
and prayers put on hold.
The gone of those no longer here
to indulge the chocolate. The lamb.
The fiddlehead muffins
and chili ice cream.

Your passing has stopped
our tribe in its tracks. Staring at holes
where the once, were. Where we’ll once again
gather the grace to stand. Up to the day. The wrath.
The reckoning of our vagrant truths:
That we yield through perseverance,
that giving is the gift.

Boris Karloff at the gym

Boris Karloff
duckwalks past my lat pull
w/the same blurred aura
of motion and odd hours
As I find myself
most often engaged.
Saints past prime
w/intestinal roar.
Prone to malfunction.
Unsure. Unformed.

I try for a six pack
but uncork a cab
and drop some relief.
Lats, stats, and belly fat
flapping. Caught in mid lament,
I laugh. Turn it over
in my head. Bike another
quarter mile. Think about dinner.
Sigh a prayer.