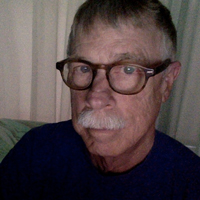 My arms full of groceries, mostly light stuff but a couple heavy things, I was just leaving the Giant Grocery south of Baltimore. I had to adjust the load once to avoid straining. There was a car about thirty feet ahead of me with a man in the driver’s seat. He was very still.

He must be waiting for his wife, or someone else close to him. No one would wait that patiently for someone they didn’t like. His head was slightly bowed and looked rested, as if he were about to doze off.

As I got closer to the back of the car I could see more than just the back of his head. There was a glow on the edge of his face, angelic but also neonish, like the glow on the sidewalk on the Block in Baltimore, reflections from the all the bright signs outside the strip shows. It was pretty there, like a circus, and I never understood why my mother always said to be quiet when our family car crept through that street. It was magic to me; maybe it was a kind of magic to her, too.

The glowing-faced man’s car was bright green. Not neon green, but a kind of spring green, like the early leaves on the sycamore trees, before so much chlorophyl turns them mature and strong and dark. The car itself was of no distinction. A sedan. Or maybe a small wagon. Certainly not a truck. Or a sports car. And timeless; it could have been five years old, or twenty.

The man was doing a good job being still. I secretly admired his stillness. It would have made a yogi proud. And the day was hot. Perhaps eighty degrees. The car’s windows shut. The motor off–no air conditioning. Should rap on the window to see if the man was all right? If he were a child, I would have grabbed the melon-sized piece of concrete nearby that had broken off a parking lot stop –the kind used to keep cars in their parking spaces– and smashed the window to save the man who was 30-40 years younger than he was. I would be hailed a hero. In a ceremony at City Hall, I would be given a certificate by the mayor for my heroism. I would have the unending thanks and love of his mother and father, who had forgotten he was in the car when they stopped for a cold drink from the 7-11 next door and then thought they should pick up some cold cuts and bread for dinner from the grocery store and then met their old neighbor inside who had moved years ago and whom they hadn’t kept in contact with and were so happy to see and catch up with. But, since the man was an adult, quite in charge of his own destiny and such other things as opening windows or turning on AC, I just stared at that piece of concrete (although, to this very day, I wonder if it could have broken the window, and how many blows it would have taken).

I was almost to the car now.

There was a feint smell of gasoline. I couldn’t tell if it was from the car with the man or from some other car. It may have wafted over from the Shell station across the street. It was raw, and it smelled of danger. Oil smells calmer. Oil smells of earth and dinosaurs’ DNA and the pressure of a million years. Gasoline smells of industry and hurry and capitalism and unending fire. I lifted the collar of my t-shirt over my nose. I must have looked like an amateur robber absconding with stolen groceries. The smell persisted. Like an old woman’s perfume in church, it was inescapable. Except the man escaped it. He breathed only his own odors.

I was about to pass him. Should I look at him? Should I be prepared to quickly look away if our eyes meet? Or maybe nod and smile? What if he were doing something illegal? Or immoral (at least in public)? Or perhaps he’s not in public. Perhaps he considers himself removed, safe from all the smells and sounds of modern life.

Should I pass and not look? Or glance sideways to see his face? Maybe I could fake looking back at something near him –the hood of his car, the late summer cirrus clouds whirling in the noon sky–and somehow steal a quick look at his face (hoping, of course, he wouldn’t be already looking at me). Not looking would take great will and determination on my part, not to mention dismissing all the previous speculations I had amassed.

I decided to pause ever so briefly and look at the man’s face. I really had no choice. I had invested too much. It would have been tragic –no, anticlimactic– to ignore him. Like listening to Aida but stopping short of the Grand March.

The hair on the back of his head was slightly gray, like mine. He even had a bald spot like me (except mine was in the middle of the back; his, more on top). As I began to see the side of his face, the glow became more perceptible, and, at the same time, artificial. What a fool I was. The bowed head, the glow, his stillness: he was looking at his cell phone! It explained so much. I had wasted my time. There was no mystery here, no man-child to save with a piece of concrete.

Still, I needed closure. I needed to know what he was so intently watching. Perhaps it was the CNN app telling of some great or awful news. Perhaps it was a gaming app and he was 10 points from breaking the world record. Even if it was something mundane –the Weather Channel, say, or his wife’s message to remember milk– I had to know. So I dropped one of my bags, the one containing bread, some dog treats, potato chips, just outside his window. Nothing that could make a mess. I leaned down to pick it up, and made a show of rearranging it in my arms so that I could look inside, down at the man’s lap. There it was, his iPhone. I could clearly see the screen, about three feet from me.

It was completely white.

Some years ago John Himmelheber retired from teaching high school Enlish and now he teaches writing to seniors in Asheville, North Carolina. He continues to write and occasionally to publish. John also edit the Smoky Blue Literary and Arts Magazine.