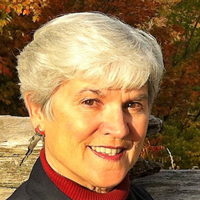 INTO THE BLIZZARD
by Kathy Robertson

During our annual drive
we rediscover
the buttery meadows
meandering amongst
Niagara Escarpment bluffs
decked in colourful coats
of the season burgundy,
gold, scarlet, plum—
as sun’s rays
torch the landscape.

Homeward bound we lick
double-scooped cones
as a syrupy sunset
blazes the horizon
while honking V formations—
black on orange—
take flight to southern climes
under the benediction
of a harvest moon.

The blizzard of the world has crossed the threshold and it’s overturned the order of the soul.
Leonard Cohen

It’s a blinding blizzard
the kind that shrouds
well-worn paths
to safe harbours
where snow surges
throughout the night
flinging flurries
whipped by prevailing
westerly winds
weeping ominous wails
like a fog horn at sea.

Red-eyed at 3:00 a.m.
he studies the storm
from his bedroom window—
his anguished soul chaotic
as the tumultuous tempest—
then begins to comprehend
that only as he trudges
into the blizzard
can he emerge
chastened and whole
on the other side.

Canadian writer Kathy Robertson is the author of Poetic Ponderings. Her work has appeared in literary journals and anthologies including Voices Israel, Crannóg Literary Journal, Taj Mahal Review, The Avocet, The Banister, The Ontario Poetry Society, and Tower Poetry Society. Most recently, she is published in Tamaracks: Canadian Poetry for the 21st Century by Lummox Press in California. Kathy was a performing literary artist for the 2018 Cambridge Celebration of the Arts, a presenter at the Bluewater Reading Series in Sarnia, Ontario and a panelist at a literary event discussing the topic From Monologue to Dialogue with keynote speaker John Greenwood.