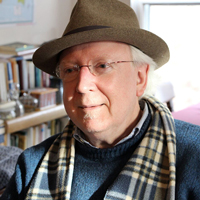 NOVEL AS PAINTING: The Tiger’s Wife by Tea Obreht
by Wally Swist

Lead sentences to monumental novels are memorable. Gabriel García Márquez opens his One Hundred Years of Solitude with Colonel Aurelio Buendia facing a firing squad and thinking about his grandfather telling him the story about the time he had “discovered ice.” Francine Prose opens her inimitable American classic, Household Saints, with how a bride was won in a game of pinochle, ”It happened by the grace of God that Joseph Santangelo won his wife in a card game.”  Tea Obreht opens her novel, The Tiger’s Wife, in an impressionistic prose style, which is kept buoyant throughout the entire novel: “In my earliest memory, my grandfather is bald as a stone and he takes me to see the tigers.  He puts on his hat, his big-buttoned raincoat, and I wear my lacquered shoes and red velvet dress.”

Obreht is, indeed, a painter and her palette includes not only the entire alphabet of words but their own hue of colors.  The Tiger’s Wife is a postmodern folktale with all of the rich embellishments that one might expect from both the folk tradition and a sense of a rupture of postmodern society.  Natalia, the novel’s main character, is on a mission of mercy at an orphanage beside the sea in a Balkan country attempting to heal deep rifts after years of armed conflict.  While Natalia and her lifelong friend, Zora, finish inoculating the children there, she begins to perceive the secrets pervading the very landscape around her.  She also experiences a deep and haunting mystery surrounding her grandfather’s death, which she attempts to plumb.

Questions abound within her: why did her grandfather, a renowned physician, chose to die in a tumbledown outpost which no one in her family had ever heard of before?  Why did exiled himself?  There are some of the reasons why Natalia begins her hero’s journey.

Afflicted with heartache, Natalia attempts to explore what her grandfather’s state of mind may have been that precipitated his departure.  She plumbs the recollection of their weekly trips to the zoo when he would read to her from a well-worn copy of Rudyard Kipling’s The Jungle Book.  He also told stories of his encounters over many years with “the deathless man,” an extraordinary immortal and a vagabond who apparently never aged.  She also recollects her grandfather telling her the tale of a snowbound winter during World War II when the Nazis were kept at bay due to impassable roads deep in snow.  Natalia never forgot her grandfather’s descriptions of the frightening presence of a tiger: hunting, on the prowl, lurking in the wintry darkness.

When an unwitting blacksmith kills himself accidently, the tiger is opportunistic, but ever mysterious.  Obreht writes, “ . . . he was ready to fire, strangely calm with the tiger there, almost on him, its whiskers so close and surprisingly bright and rigid.  At last, it was done, and he tossed the ramrod aside and peered into the barrel, just to be sure, and blew his own head off with a thunderclap.”  What shivers we may feel from reading Obreht’s prose prove to be as icy as they are memorable.

Although essentially being a tale regarding a deaf-mute girl who befriends an escaped tiger who fled the zoo, when Obreht was asked to summarize The Tiger’s Wife by a journalist at Cornell University, her Alma mater, she replied, “It’s a family saga that takes place in a fictionalized province of the Balkans.  It’s about a female narrator and her relationship to her grandfather, who’s a doctor.  It’s a saga about doctors and their relationships to death throughout all these wars in the Balkans.” 1

Writing in The New York Review of Books, Pulitzer Prize-winning poet Charles Simic wrote that “Tea Obreht is an extraordinarily talented writer, skilled at combining different types of narrative — from objective depiction of events to stories mixing the fabulous and the real — in a way that brings to mind the novels of Mikhail Bulgakov, Gabriel García Márquez, and Milorad Pavić, the Serbian author of Dictionary of the Khazars.2  Other reviewers cited Obreht’s ability to blend “fact and folklore, ritual and superstition” 3 together with “astonishing immediacy and presence.” 4

At 25, Obreht was feted as the youngest recipient of the prestigious Orange Prize for Fiction, in 2011, which is recognizes “excellence, originality and accessibility in women’s writing from throughout the world.”  The prize then included an amount of £30,000 cash and the “Bessie,” a limited edition bronze figurine.  The Tiger’s Wife was also cited as a finalist for the National Book Award for Fiction.

Wally Swist’s books include Huang Po and the Dimensions of Love (Southern Illinois University Press, 2012), The Daodejing: A New Interpretation, with David Breeden and Steven Schroeder (Lamar University Literary Press, 2015), and Candling the Eggs (Shanti Arts, LLC, 2017). His new books are The Map of Eternity (Shanti Arts, 2018), Singing for Nothing: Selected Nonfiction as Literary Memoir (The Operating System, 2018), On Beauty: Essays, Reviews, Fiction, and Plays (Adelaide Books. 2018), and the winner of the 2018 Ex Ophidia Press Poetry Prize, A Bird Who Seems to Know Me: Poems Regarding Birds & Nature (Ex Ophidia Press, 2019).