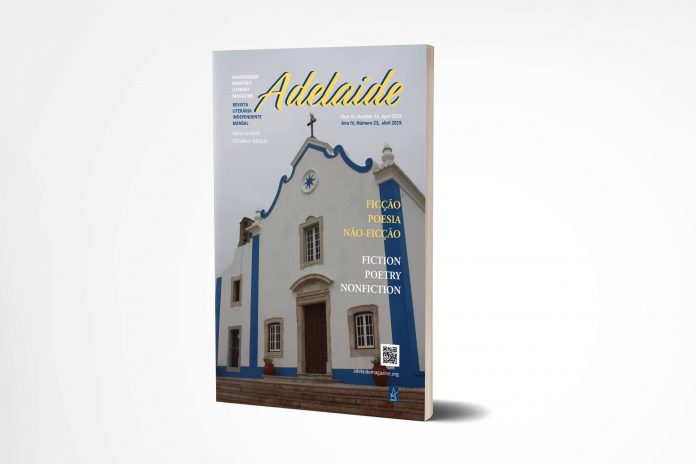 ORANGES AND LEMONS
by Aaron Fischer

When the last words of some conversation
get lost in a spatter of crackle and buzz, I can almost hear again

the band roaring through its set, the music palpable
as a windstorm, pushing the crowd back half a step,

cranking up the slam-dancers in the mosh pit,
as if the floor of CBGBs were a hot skillet,

behind you like it’s attached to an IV,
or jump up and down, fist pumping,

hair falling over your face and shades,
a scrawny punk afflicted with St. Vitus Dance.

In the summer of my lost year,
under the signs of the roach and silverfish,

the Lower East Side collapsing on its own
into rubble and plaster dust,

the music was all we wanted, the drugs
were just something to do while waiting,

we told ourselves, like the great jazzmen, the dead
soldiers — sticky-sweet Robitussin empties —

piling up in the sink, the crimped tubes of glue
and paper bags littering the floor of the bedroom,

the Mexican heroin the club kids sold,
black tar, the scraps of tinfoil used to chase the dragon.

There was always another show. At the Continental
and Max’s, at Coney Island High on St. Marks,

at the Mudd Club and the Pyramid, where the bartenders
wore full drag and earplugs while the band

howled through its cover of “Palisades Park”
and you delivered your surreal catchphrases,

like “Gabba Gabba Hey,” which we loved
because it meant nothing, just as we loved you,

an acne-pocked kid from Queens with bad teeth,
our goofy virtuoso of chaos.

It took me three shots at rehab to get it right.
I moved to Jersey and worried for years

that I would run into someone I knew at the Chinese takeout
or laundromat. I bought each record

when it came out: The band getting louder, like a chop shop
dismembering Hondas and Toyotas on Ave D,

the songs faster, your frayed voice giving out
on the choruses. When did you know you were dying?

I saw your last show at the Academy of Music,
your Christmas spectacular. You looked as if

you were leaning back against that wall of sound,
letting it buoy and buffet you, and the audience,

frightened into an awkward tenderness,
tried to sing along.

Honeymoon-giddy, almost lightheaded with being
in London my first time, the city like a promise redeemed,
“the brave, old, melancholy color,” Henry James’ close reading
of the porous, soot-scoured skyline, the nursery rhyme

churches and bells, St. Martin’s and Bow, the antic,
venerable carnage at Covent Garden, where Mr. Punch laid low
Judy and baby and beadle, an incarnadine Old Nick —
“That’s the way to do it,” he prated and crowed.

All those books I buried my nose in
when I was meant to master something useful:
How glorious for us to be thronged by such companionable
ghosts, to climb to the garret where Dr. Johnson

set the English language right, or stand where Donne
woke too early with his lover and scolded the rising sun.

It was the winter of yellow jackets and black beauties —
diet pills loose in a bowl like Halloween candy, Chick’s trailer
half buried in drift scattershot with scurf and cinder
blown downwind from our neighbor Mohawk Steel and Foundry.

It was the winter my mouth always tasted of blood,
when we lived on Benzedrine, Tang, and toast,
and never went out before the sun slid behind the hoists
and razor wire fencing the steel yard.

That was the winter I dropped out of school.
Chick caught pneumonia and tried
walking to the VA hospital, until the cops picked him up on I-90,

wearing an army blanket over his camo fatigues,
the winter he swapped my picture for the blurry face of the lost kid
asking, “Have you seen me?” on a carton of curdled milk.

Swapping out a single vowel changes the island’s name
to “hurt,” better suited to the city’s potter’s field, terminus
for its unclaimed dead, mapped to their mass graves,
where numbered coffins are stacked by shackled prisoners

in dayglo-green jumpsuits eager to work for 50 cents
an hour and a view of the East Bronx money can’t buy.
Not just the homeless make landfall here, in these dense
underground tenements, strict trenches chiefly occupied

by acre after acre of the poor, a handful of well-heeled
second cousins and great aunts unlucky enough to outlive
their connections, a few hundred “on loan” to med schools
and teaching hospitals, in the chill lingo of the civil service.

Yet even here, where the million dead are legion, how little
headway they’ve made on the marsh grass, the tawny cattails.

In one, the faint tang of mildew and bleach informed
our sleep, in another, an archipelago of mossy stains
bloomed on the wallpaper — those tourist cabins my parents
rented for a week in August, when Brooklyn shimmered

like a fever dream, when my mother in her dust-colored
robe, and my father, bedded down on the couch in his BVDs,
forged their sullen, seasonal ceasefire. Money, money, money
sniggered the window fan, troubling the dead air.

The lake glittered, a sheet of tin. My mother burned,
my father browned. I sat on the porch, afraid of the sugar-drunk
yellowjackets loaded on Kool-Aid. Under the sun-dazzled
trees the leaf-filtered light made me think of coins, scattered

for a brother and sister to follow into the forestuntil they found a house good enough to eat.

Aaron Fischer is a former editor at a progressive news site. His poems have appeared or are forthcoming in After Happy Hour, Briar Cliff Review, Columbia Poetry Review, Journal of American Poetry, Naugatuck River Review, Sow’s Ear, Third Wednesday, Tishman Review, and other publications. He has been nominated twice for a Pushcart Prize, and his poem “Aubade for LR” was chosen as one of the top three sonnets of 2018 by the Maria W. Faust Sonnet Contest. His chapbook, Black Stars of Blood: The Weegee Poems, was published this summer.

WAKING UP by Jennifer Novotney