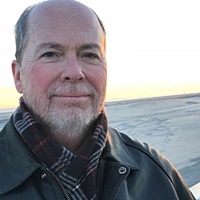 Neighbors I Have Known

Robbie
who never held a job but didn’t discuss it with me
Tommy
who wanted to write a book
Adrian
who chased birds from her backyard every morning by banging the tree with a stick
John
who played drums with a rock band
Carmen
who walked her tiny dog late at night
Dolores
who didn’t seem to age
Ellen
who always asked me how I was but wouldn’t talk about herself
Martin
who lived with Ellen but went to Mexico without her
Leon
who stuttered.

You reminded me tonight how are our fathers died
Out of nowhere — chatting about our lives  —
The work, the spouses, the children, the taxes.

How yours became sick and left suddenly
How mine faded to a husk, slowly succumbing.

Some of the others as well — uncles, aunts, in-laws, friends —
A fog of history we both loved, receding like a shared wave
On an ocean tide at red-gray dusk.

Our future is in the glow from the quarter moon remaining
After we said goodbye.

The cat’s atop her perch
below our lamp, she stares
as you work your portrait.

Craig Kennedy writes poetry and short fiction. Recent poems have appeared in the April 2018 issue of Adelaide Literary Magazine as well as in Blue Mountain Review and Scarlet Leaf Review.  Some of his literary influences include W.C. Williams, Wallace Stevens, Neruda and Bukowski. Craig lives in the New York City area.