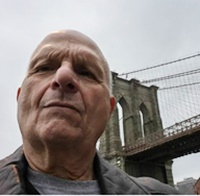 A black and green lamppost, tall with chipped paint, across from Bryant Park, in front of a classic brown and gold twelve storied building, the wind reeking of the park’s dead yellow grass, cigarette smoke, automobile exhaust and blood. Hanging from the lamppost is a half-skinned, large white male wearing only trousers, supported by ropes about his torso, legs and arms. In agony, still alive but barely. New York City is some kind of town these days. He will be dead in less than a day.

In a mid-western city, the lake winds blow the hat from a small, nicely garbed man’s bald head. He reaches up very quickly and catches it. I am faster than the Chicago wind, he thinks to himself. Clifford is many things, but faster than the wind?

He walks for a block before replacing his hat, across an ancient bridge toward Lake Michigan. When he finds a favorable spot, isolated and quiet, he drops two of Ericson’s severed fingers into the restless water, then the knife he used to sever them.

The sun was nearly set on Chicago. Lake Michigan glowed with dark colors and immense beauty. Clifford turned and began his walk home, then realized he could use a drink or two.

The man on the black and green lamppost groaned through the rags that bound his mouth, barely a sound was heard. He went on like that, groaning, for a few hours before the pre-death silence set in. Bryant Park was empty now, the sky dark and the crows squawking. The dying man was meant to be a public display, erected to teach a lesson of some kind to someone. Not an uncommon spectacle these days, raised by a powerful enemy, one would assume. But no one else watched the man die. Silly waste of a lesson if you ask me.

Birds will soon pick at the dead man’s eyes and flesh. Early morning children will point at him and ask questions that their teachers, nursemaids and parents will ignore.

Young Jonathan at The Lakeside Tavern knows what kind of man Clifford is. Jonathan instantly walks toward him whenever he enters the room. Yes Mr. Jeffers, no Mr. Jeffers, but mostly yes. Jonathan has a careful, sensitive understanding of people. He is very good at his job.

Clifford tries not to think about Ericson very much, and after a few stiff drinks he’s almost there. He sits at the bar and drinks for just over one hour, happily pays his bill and leaves a good tip for young Jonathan, then says good night. Clifford exits through the front door into the cool night. The darkened streets, glowing streetlamps and gusty lake-winds make him feel at ease, at home in his Chicago. Erickson’s future existence is not his concern. He did his job and did it well. Clifford discovered all of Erickson’s little secrets as required, with only two digits lost. Erickson was lucky as far as he’s concerned.

The morning birds, birds of all kinds, flutter around the poor victim’s right hand, attracted by the bloody remains of two fingers. The half-skinned man is long dead. He will hang above the park for another two or three days before anyone finds the courage to take him down. A late winter snow begins to fall upon our little city, making it beautiful, this New York.

Donald Zagardo is a former Professor of Modern World History at St. John’s University. He has a life-long passion for literature and has studied fiction-writing at NYC’s Gotham Writers Workshop. In the past few years he has directed his writing efforts toward short stories and novels, searching for unusual topics. He is presently assembling a collection of his own work. Donald lives and writes in New York City. He enjoys international travel, foreign languages and photography.