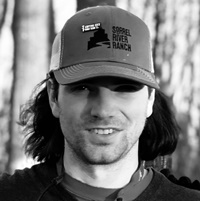 LEAVES FROM THE FIELD
by Michael Robinson

At Christian Appalachian Southern Baptist Institute (CASBI) there are two statues in the garden with the water-spring pond and a brick walkway leading to the main campus. One of them is of Led Shear, holding a rolled-up playbook and appearing as though he’s going to smack somebody with it, his mouth and teeth and tongue roaring like a bear being hunted and shot. And the other statue nobody really cares about.

Shear coached the Cherokee Rose for thirty-four years. He was never a man of small stature, even during his first year in command. Six foot two inches tall with a gut that carried the conviction of his thudding roar and a gut that is hard as stone.

He started balding since before he walked up and down the sidelines like a ship’s captain and had beach blonde hair and the gaze set in his eyes similar to that of a cowboy outlaw. His eyes were a calm sea and of patience and they were screaming.

He called his playbook the Good Book, hollering at his players when they came off the field, grabbing their facemasks and saying, “Good Book says Zebra Stripe Y Jet. Says crossing route. Good Book says cut across the goddamn middle and hit somebody.”

He coached the eternity of moment. How there are some things you can do and achieve on this field that will be so glorious and so almighty, they can never be lodged from memory, from the soul of earth, from the field. He coached each practice like giving a sermon, reading from the playbook as it were a Holy scroll. “We’re gonna run some plays today men. Gonna run some good plays. I know you’re tired and I know you might be scared of many things. You’re young. There’s a hell of a lot of pressure on you to not be young anymore. Good Book says come against your fears with great fury.” If there was not tracks of blood left behind on the field each day he grew disappointed and he grew angry too. He’d have them run Oklahoma drill til men broke bones and men cried, til their flesh bled.

When they ran wind-sprints up and down the field they usually ran beyond the point of men vomiting and would run until somebody finally collapsed, and often run further and longer than that, and he’d chase them from goal line to goal line in a golf cart and megaphone. “You think you’re gonna beat anybody if you don’t got the grit to run in a hundred n‘levin degree heat. There’s boys in Texas and they’re big and they can’t wait to play us. They want to beat you like your daddy beats you. You think what you want is given. Hell no. You got to take it.”

On game-days he made sure there’d be blood. Before the first snap if he pointed to a player they had to bull-rush him and jar their helmet against his forehead. By the time they sang the national anthem, he stood shoulder-to-shoulder with his players, holding their hands and blood streaming down his face like a man borne by war. If they took a knee he’d take a knee with them. They were his sons.

By the time he was hired he was already forty years old and washed up. He had been prosecuted for gambling on college football, and on many occasions bet against his own team, and found guilty too, for the soliciting of transvestite prostitutes over the course of twelve years. His family forgave him but no University ever has.

CASBI was the only program to give him a second chance, and they didn’t even have a football team. He was hired to draw one up from the dust and so he did.

Their field was also the baseball field with wooden stands which were always creaking and a triangle of dirt mounting the fifty-yard line. When they fell down upon the baselines the dirt scratched and scraped against their skin feverishly. One of the sheerest and sharpest pain this world has to offer. “Get up and hit somebody,” he’d shout. “You can feel sorry for yourself if you want but on this goddamn field. No-sir.”

Red and yellow, and green and brown leaves fell from the oak trees and came gently down upon the field when the season started and it gave birth to that aroma which is the sport of football.

He gave them the name Cherokee Rose and designed the helmets. Painted Navy blue with an emblem of the flower on one side and the other side a Cherokee chief with a mohawk and blood face paint shaping its eyes, a single brown thrasher feather risen from the scalp like an extension of its own hair and an arrow tethered to it appearing as it were slithered through its skull.

During camp, the helmets were white and plain revealing the scratch marks, the dents and the blood. They wouldn’t be painted and decorated until the heat felt a breeze, until the leaves fell, until the world smelled like the skin of pig. And they made their helmets smooth and reflective of the sun, and with tomahawk stickers as it were a ceremony before battle.

He gave them seven national championships and produced about half as many NFL players. Probably the most famous player he coached was Freeman Lord, or The Reverend as he’d be known, who played the once-upon-a-time position of rover and ended up with the Lions for three seasons. Shear gave him a scholarship when the other coaches told him good sense says cut that boy. In camp, during sprints he had dropped to a knee and took off his helmet revealing a mohawk dyed blonde and vomited and wiped the fowl from his face and put on the helmet again and rose and ran from Shear’s golf cart which could not catch him. If anybody listened to Shear, it was Lord. He’d wind up for most of his adult life in and out of jail for crystal meth and domestic violence, and with nine children from three different women, and did not make a lasting impression in the pro’s, but for four years with Shear he was the best safety in the game, and won three awards during that stretch proving it, listening to coach tell him ‘I don’t care who carries that ball for the other team–I don’t care if it’s Jesus Christ at running back, you come at him how you’d come at the devil, you hear,’ and Lord would come screaming savagely from boundary to boundary imitating a Cherokee war-cry or rebel-yell, leveling up upon opposing ball carriers like a bullet. Like a sacred spirit. Like a messenger of God made flesh upon the earth, upon the football field. A dancer in cleats, galloping across the field with a lunatic’s grin under his face paint which was his own blood.

This is how Shear coached. He watched game film every night with great passion, his wife saying, “You watch all those film sessions like it’s a good movie,” studying and making notes behind an ashen cloud of cigarette smoke and the sound of whiskey swirling and ice clinking within glass. Breathing the beat of his heart.

During the offseason he’d drive his 1983 Buick Skyhawk station wagon, painted red, through the bible belt like Moses, searching for the Grace of God in the fire of flesh–raw talent, that special type of blood which when people witness, people testify, saying, “My God. That boy is going to play on Sundays.”

He’d sit down in homes and eat homemade pie and wait for it to get quiet and then tell the parents about their son, that he’s going to be their father, he’s going to be their preacher and their teacher too. “Hell I’ll even be their mama-away-from-mama.” He would smile saintly. “I’m gonna see them through until they can see through it themselves. Mr. and Mrs. So-and-So, I’m gonna be their football coach.”

One day it was all over. His career record there was 272 wins and 88 losses. He made the playoffs every year except for three. His last three. His three years he won ten games and lost twenty. It hit him like an old gunslinger who was at one time the quickest, who finally gets shot in a draw before he even touches his gun. He was staring in the mirror when it hit him like a bullet, seeing his wrinkles and his hardened jaw, and the little bit of hair he had going from gray to white, from some strands to nothing, and his soul getting softer and softer like the wings of dove are about to carry it someplace else, and when he admitted to himself he can’t coach anymore he was alone, looking at himself and he started to cry.

After he retired he lived for three more days.

Gathering around the hearse were thirty-four years’ worth of players multiplied by fifty players each year, plus their families, and the fans spanning over three or four generations—seven-year-olds crying by the sides of tearful men aged eighty-eight, and there was even News Channel 7 there to cover the event.

“John, I’m standing by here, live where the souls of so many…”

He was buried in Paradise Cemetery with the old gates that has paint chipped and chipping from forty years ago, and some paint from a hundred years ago. The creek and the forest and the oak trees, and just a few tombstones in that small fielded patch of land. Before they let him down the preacher ended with “Hit Somebody!” and everybody said Amen.

His resting place is popular for many to come and pay respects. They touch the earth sharing his soul. They snort their nostrils and rub their cold wet cheeks and stare at the stone, standing there with him, not wanting to leave.

Cherokee Roses are planted all around the frame, above the ground of his coffin. It is said even the hawks and the deer there will come before his tombstone for an eternal moment and bow their heads at the presence of his spirit and the words carved and stenciled there forever on stone which reads Good Book Says Come At Your Fears With Great Fury.

M.F. Robinson was born and raised in North Georgia, and has held and been fired from a variety of jobs in his home state as well as Tennessee, Texas, Utah and California.