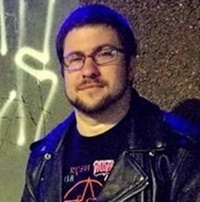 Claire waited on the couch for her parents to arrive and gripped her husband’s hand as she watched the grandfather clock tick by. When it struck noon, it gonged loudly. Clair felt each ringing in her skin and ran her fingers along what had been a baby-filled womb.

Her husband pulled her head to his chest and ran his fingers through her hair. She breathed in deeply, comforted by the scent of cinnamon and hickory. The clock’s chimes echoed in the air and vibrated against her skin. She eyed the door knob.

Then the alarm for the door sounded: Front. Door. Open. And in walked Claire’s parents. Claire sprung up from the couch, her husband joining her as he adjusted his suit jacket. For a minute, everyone just looked at everyone else. Claire gazed at her father’s gray mustache and thought of how it was a magnificent thick brown when she was a child, then at her dear mother. Claire had followed her everywhere growing up. The mother who Claire would inevitably become.

“Shall we?” her father said. And he took his wife of thirty-two years by the hand.

The car ride was slow and relatively quiet. In the back, the parents were reminiscing about their youth. They told Claire’s husband how nervous they were when Claire was born, how they didn’t have a clue what they were doing. They spoke of their childhoods. Claire’s father was a runner in his twenties, some thirty years ago. And her mother was a singer. “Best in town, too!” her father added. Up front, Claire’s husband nodded along in the rearview and smiled as he gave Claire’s hand a squeeze. But Claire was silent. Her thoughts were on the baby girl she’d given birth to the week before. How still the newborn was, how unmistakably dead she was. Not dead, per se. Just…not alive. In her hands, she held a prayer shawl, soft blues and old, faded whites that she’d had since she herself was a newborn baby.

Claire’s husband parked in the corner of the lot. The walk to The Pit felt slow to Claire, like walking through snow. She didn’t mind taking the time though; she walked between her parents the same way she had when she was a child—when her parents were barely older than she—holding a hand in each of hers. Once past the welcoming building, The Pit was the only thing Claire could focus on. It was large and a light breeze kicked up dust from its depths. Around its edges were platform-like-planks, the ends of which hung delicately over the great descent. There were seven platforms in total, a few less from last year’s Awakening. Claire had never been to an Awakening before, but her mother had told her about it—prepared her for it. When Claire spotted their plank, she wanted to run to it, but her husband held her back with a firm grip on her shoulders.

On the floor of the platform was a basket filled with a blanket. Atop the blanket rested Claire’s newborn, just as silent and lifeless as when delivered. The baby was wrapped in a little shawl which matched the one Clair held in her hands. Claire and her husband stood at the base of the platform. Her husband shook her parents’ hands and thanked them for raising such a beautiful woman. Claire looked into her father’s eyes as she handed him her shawl. She wanted to cry, to scream, but all she could do was say, “I’m so sorry.”

As her parents made their way to the end of the platform, six other sets of parents headed to the ends of their own planks—each with a still babe in a basket. Claire watched as her parents held one another, wrapping the shawl around themselves. Only when they jumped did Claire finally cry. She fell to her knees and held her head in her hands as her husband went to the basket and picked up their smiling baby girl. The shawl, he’d later tell her, was warm to the touch, like the fabric itself had breathed recycled life into the infant.

“She has your father’s eyes,” her husband said.

Brian Feller is an MFA student in fiction at Emerson College. He currently has two essays published in Canyon Voices Literary Magazine, and a work of flash fiction in an upcoming issue of Stork Magazine. In his spare time, he’s an avid tabletop gamer and pen collector. He hopes to work as a professor of creative writing after completing his MFA in the Fall of 2020.