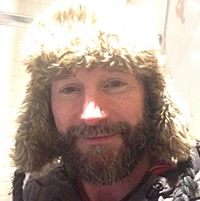 WAITING FOR LULU AT WUTHERING HEIGHTS
by Andrew Martin

“If all else perished, and he remained, I should still continue to be; and if all else remained, and he were annihilated, the universe would turn to a mighty stranger.” – Wuthering Heights by Emily Bronte

I’m in The Wuthering Heights pub. I know, it’s a shameless exploitation of the novel’s title, but Lulu and I didn’t care when we stumbled across this place in the early nineties. We liked the way it blatantly took advantage of its location on the edge of the remote Haworth moorland. We had dinner here before we set off into the open country with our tent and camping equipment.

Tonight though, I’m finishing my meal alone. I undo the top button of my shirt and release the pressure around my neck. I remove my Anglican clerical collar and place it on the table in front of me. Being back here, I feel like a twenty-year-old again. I look at the oak beams on the ceiling. The place hasn’t changed. It still has the same decor: the lead windows and ornate mirrors; paintings of the Yorkshire landscape in gilt frames. The smell of polished wood and real ale. I’m the only customer tonight. I look towards the door, half expecting Lulu to walk in but it’s extremely unlikely. It’s been eight years since I last saw her.

I reach into my shirt pocket for a picture of her, taken in her student house in Glasgow. Her eyes stare back, wild and dark. Her pale skin is unblemished, with naturally pink cheeks; blonde hair cropped short at the back; long at the front, hanging down to her jaw-line on one side. She changed hair colour frequently, but blonde suited her best. Behind her, scrawled over the walls in black ink, are verses of her poetry. She never stopped writing: in notebooks, on scraps of paper, on her hands, wherever she was, whenever she thought of it. She even wrote one on the back of this photo. I study the familiar words:
It’s a picture of a house I built burning in my head,
It’s a picture of a little boy bouncing on a bed,
It’s a picture of a little girl bouncing by his side,
It’s a picture of a daddy who may as well have died.

I turn it back over. There’s a white fold line across the middle of the photo, but it’s the only picture I have. I place it on the table next to my dog-collar.

Outside, snowflakes tumble down in ever-changing courses. Fleeting shapes fall and disintegrate on the glass before my eyes can catch them. More drift down against the winter landscape and I’m lost in memories of Lulu once again.

The first time I saw her was on my twentieth birthday. I was in The Jug of Ale with my mate, Coddy. It was crowded; music thumping, lights flashing, everywhere the cacophonous din of laughter and chatting.

“Hey, Dan.” Coddy nudged me, pointing to a girl on the dancefloor. “What do you think of her?”

I wasn’t sure who he meant. Most of the girls looked the same to me – short skirts and white stilettos.

“Yeah…she looks all right,” I said.

It wasn’t my kind of venue. I spent most of the night slowly nursing a pint of Guinness while Coddy did his best to impress any female who would listen to him. He’d managed to speak to a girl with long dark hair.

“I’m an astronaut,” he said, with his typical straight-faced confidence.

Then I saw Lulu. She walked up to the bar and stood inches from me. She wore a purple, knee-length dress with Doc Marten boots, but what drew me to her most were her eyes. They were dark, but incandescent with life.

The waiter places my bill on the table. Two men stand by the door, ready to lock up for the night. A glance at my watch tells me it’s midnight. I apologize for keeping them, put my collar and photo in my pocket, and settle up. I step outside into the cold air. The moon is big and bright. It’s stopped snowing and the wind has died down. Everything is white.

There’s no sign of anyone outside. I pull my coat collar tight around my neck and stroll along the path towards the heath, the inspiration for Emily Bronte’s tragic love story. ‘Wuthering Heights’ was Lulu’s favourite book.

Last time we were here it was under cloudless blue skies. I remember sitting outside our tent in the long grass surveying the endless moors, breathing the sweet warm air, watching the wings of insects dancing in sunlight. The memory is etched in my mind. Lulu noticed a white rose growing next to us.

“Look,” she whispered. “That is so rare.” She took hold of it and broke it off halfway down it’s stem. A thorn pierced her skin and drew blood but she didn’t flinch.

“Whenever you see a white rose, think of me.” She handed it to me.

I wanted to ask her to marry me there and then, but I was scared of being turned down.

Instead, I asked, “Do you think we’ll still be together in ten years?”

“Maybe.” She smiled, amused at my question.

And then, to try and ensure we didn’t ever lose contact, I came up with this ridiculous idea: “Let’s meet back here in the year 2000, whether we are or not, on the date of Bronte’s death. Midnight.”

“The nineteenth of December. Okay.” She looked deep into my eyes and smiled.

I held the side of her face in my hand and reached towards her. Our lips touched. Tongues. Two souls merged together; the outside world non-existent. Bodies touched; stirred.

A single snowflake lands on my nose. Then another. I look up into the night sky as the snow starts to fall  again. I pull back my coat sleeve and look at my watch. It’s quarter past midnight. I don’t know if the idea was to meet at the pub or where we camped. I don’t hold much hope but wander further down the lane.

“Like the eternal rocks beneath.” That’s how Lulu once described her love for me and I felt the same for her. I’d never met anyone so fearless and unpredictable, yet at other times she’d be lost in deep thought. She studied Art, while I read Theology. We started going out after lectures, drinking and smoking together, talking into the early hours, spending every available moment with each other.

I walk through the falling snow, along a dim, deserted path in the direction of the rock-face, close to where we camped. From the gate on my right, the lane slopes towards the open countryside. I sink up to my calves in soft, fresh snow. All I can hear is my own breathing and the light crunch of each step as I move forward.

Lulu didn’t know her parents. She was brought up in a Catholic orphanage on the west coast of Ireland. She didn’t talk about her childhood very much. All she ever told me was that she’d been abandoned when she was six years old. She hated the thought of being left by anyone again; she told me she preferred not to get too close to people.

I stop for a moment and hold my breath. There’s not a sound except for the very faint whisper of snowflakes landing all around me. As I set off again, the crunch of my footsteps is deafening.

I arrive at a steep bank and the snow slides away in clumps. I grab a branch above my head and a dusting of white powder falls, but I’ve made it. I’m in an open space with a view of endless hills. I stand for a long time, taking it all in, looking for any sign of life on the beautiful, desolate moor.

We saw each other every day for a year. She gave no explanation before she left, except that she needed to get her head straight. A week afterwards, I received a poem from her in the post, along with a note saying she was staying with an aunt in Ireland. A few weeks after that, the lease ran out on my house. I tried everything to get in touch with her but no-one could help. The university wouldn’t provide me with any information and no-one knew her home address, or even which village she was from. I never heard from her again. I spent a few months drinking myself into a numb haze until I realised I was better off getting my life back on track, training for the ministry, helping all those other broken-hearted people.

I’ve been the rector at St Matthews in Ayr for three years. None of the leadership or parishioners know anything about Lulu. I take a deep breath. After tonight I’ll be able to put to rest any thoughts of a reunion. The air is crisp and still. Nearby branches crack as they strain under the weight of fresh snow. I stand motionless on the moor, listening.

Moonlight shines through the clouds and my eyes become accustomed to the light reflected on the heath. Apart from black shadows under bushes, everything seems as bright as daylight. Then I hear a faint thud and feel a chill on my neck. I listen carefully. I can sense someone near. Close behind me. Maybe two meters away. Maybe closer. I’m too scared to turn. A rustle. Someone out walking their dog perhaps? Or is it just the sound of winter on the moors?

I turn, but there’s not a soul for miles. It’s stopped snowing.

A memory comes to mind. A burned-out tree nearby, destroyed by lightning. All that was left was the remains of the trunk; the top brown and charred. I’m not far from it. I step forward.

Around the side of a hill is the rock-face we climbed – its towering presence imposing. It was at the top that Lulu and I held each other, surrounded by endless countryside. I stand motionless, absorbed by the familiar sight, and it feels like Lulu is here with me.

Another memory unfolds. Something she said to me. A Bronte quote. What was it? I close my eyes to concentrate. There was a moment when Lulu had slipped from my arms and looked straight at me:
“Be with me always – take any form – drive me mad! Only do not leave me in this abyss, where I cannot find you!”

I open my eyes. The seriousness of her face when she said it. And yet here I am, back on the heath, unable to find her.

Praying feels pointless tonight. I reach into my coat pocket and take out a small bottle of Glenlivet. There’s a crack as I twist off the cap. I hold the bottle to my mouth and take a generous gulp. The acrid taste of scotch burns the back of my throat. My eyes are warm with tears and I throw the bottle as hard as I can onto the heath. It lands with a quiet thud and disappears into the snow.

I stumble backwards a moment and through blurred vision, I see the burned out tree. Such a distinctive sight. It must have been hit directly to cause that kind of damage. One side of it is covered in snow and the other is untouched. I walk towards it and see words scratched into the bark:
IF ONLY
YOU’D COME
X

Andy Martin is a teacher of Philosophy in England. He has had several articles published in the music magazine Brum Beat. This is his first short story.