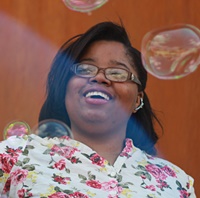 WHO AM I
by Britney Saint Joy

The hot sun hit the face of a woman who stood very confused examining her surroundings. A shopping district aligned with numerous shops and cafes surrounded her while a plethora of people who didn’t pay her any mind circulated? People moved in an array of different speeds as they all had somewhere to be. The woman, on the other hand, felt directionless as she didn’t even understand why she was there in the first place it felt…wrong. A feeling she didn’t want to sit alone with as it brought a wave of a feeling of uncertainty.

A waiter currently taking a break from his job at a nearby cafe was seen having a smoke and casually scrolling through his phone. He lifted an eyebrow as his eyes met hers after looking away from his phone.

“May I help you?” the waiter asked.

“Do you know who I am?” she questioned, her voice rose in pitch to show the distress behind the question.

The man gave her a look that seemed to be a cross between judgemental and one filled with confusion.

“No? You a YouTuber or something? You kinda look like one of those TEDTalk speakers.” He opened up the app on his phone and began scrolling as if he would find the woman on the front page of the app.

The woman, not satisfied with the answer, left the waiter scrolling through his phone. Her feet dragged her deeper into the shopping district, the woman could barely see what was up ahead as she could only gaze upon the sea of heads before her, that is until she found two boys attempting to win a toy in a crane machine.

“Come on, is it that hard to play? Let me try!”  the younger boy whined.

“I almost got it, stop whining!” the older brother answered. Sadly, the toy fell before he could get it, and his face fell just as the toy did.

The woman examined the sad expression on the two boys’ faces and the younger one took notice of her. Before he could speak the woman rummaged in her pocket for a coin.

“Who am I?” she asked the two boys with the same expectant look she gave the waiter.

She was met with the same confused look the waiter gave her but in the form of two young boys.

“Are you our mom’s friend? She’s in the store.” The older brother pointed to a women’s clothing store in front of them.

The woman shook her head and took a step up to the crane machine and inserted her coin. The children watched in amazement as she was able to get the toy they so desperately played for. Their faces lit up as she handed it to the both of them.

The younger boy smiled widely, excitement written across his face, and exclaimed in his wild happiness  “Thank you! I know who you are! You’re a nice lady!”

She smiled at the boys but that wasn’t quite what she was looking for. The two boys ran into the shop to show off their new toy to their mother, forgetting the woman at the crane. Any child would play with their new toy instead of talking to a strange woman, even if she was the one to win the prize for them.

She continued her adventure around the shopping district once again looking for someone to have the answer to her question.

Is it always so overwhelming to be in crowds? she thought. It was strange hearing people whisper and look at her as she tried to get people’s attention. She heard the musings and chatter of the onlookers who couldn’t fathom someone not knowing who they are.

A man was seated at a bench and exuded a most unpleasant aura. His eyes immediately shot to the woman and a smug grin grew on his face.

“What’s a pretty thing like you looking lost for?” the smug man asked her while drinking her in.

Her eyes narrowed. She almost didn’t want to ask him, the vibes he gave. “Have we met? Do you know who I am?”

“Well, you look like someone who needs someone to help show you around, I can help you find out,” the smug man gave a wink.

Before the man could say anything else a much gentler voice called, and she was surprised she recognized the name.

“Rachel?” A much kinder looking man ran up to the two, his face glistened with sweat and he panted as he stopped in front of the two. “Honey, I’ve looked everywhere for you!”

Rachel blinked as she took a step away from my the smug-looking man which now seemed more deflated than anything else. “That’s my name isn’t it?”

The gentler man smiled. “Of course, you’re the kindest, most beautiful, and the greatest woman I know, but best of all you’re Rachel and that’s whatever you make yourself out to be.” He very tenderly took her hand as he spoke.

She still couldn’t think of the man’s name but she couldn’t deny he gave her the best answer out of everyone today.

The kinder looking man took her hand so the couple could head home. He turned to look at the smug-looking man. “Thank you for sitting with my wife I appreciate it greatly.”

The smug-looking man grumbled to himself as he left the happy couple. The two now gave him mischievous grins.

Rachel smiled up at her husband as the two left hand in hand and for once in this crowded shopping district, she felt she knew who she was.

Britney Saint Joy is a writer who currently resides in Florida she’s currently studying to get her bachelor’s degree in Creative Writing for Entertainment. Her twitter handle is @BritneySaintJoy for professional inquires.