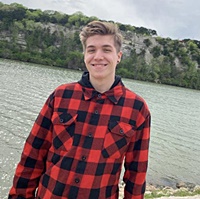 The Shoreside
by Sean Fisher

Erik stared at the photo, gripped tightly in his hands. The waves violently crashing onto the shore in front of him. A storm was quickly brewing. He brought his eyes up to gaze out at the open water, thinking of all the days he had been coming here since he passed. Something was different about today. To put it simply, Erik was done staring.
If he wasn’t drowning in his sorrow, he was guzzling down cheap whiskey like a fish. Everything made him think of the son he no longer had. The cries in the night that belonged to nobody, the toys he couldn’t bring himself to put away. This empty life wasn’t a life for him. Erik was purposeless.
He brought the photo of his son to his lips, giving it a gentle kiss.
“I’ll see you soon,” Erik said.
Erik tucked the photo into his breast pocket of his jacket. He stood up, then filled clothes with as many rocks as he could until he was satisfied. He struggled as he took a deep breath. As he exhaled, he took his first steps to the water.
He stopped just where the waves reached his shoes. Erik looked down as the water seeped into his shoes. He leveled his view back to the water. A heavy gust of wind blew the tears back into his eyes.
Erik shuffled into the water. The intense waves soaking him immediately. He dragged his legs through the water getting deeper, and deeper. He spit the salt water that managed to make its way into his mouth
Erik tried to hold off from crying, but it was impossible. He exploded into a sob.
“I’m so sorry,” he cried as the water reached his chest
In between his cries and the waves crashing he could hear something. He turned around back to the shore trying to see past the waves.
A woman stood on beach calling out to him. Erik couldn’t make out anything she was saying, but she motioned for him to come back.
“god dammit,” he said.
He wiped off the water and tears on his face then started back towards the shore.
In between waves he could see a dog paddling towards him. He slipped his jacket off and swam towards the dog.
A Pitbull. Erik’s son dreamed of having a Pitbull companion one day. Erik planned on getting him one for the Christmas that never came.
When he got to it, he was immediately greeted with slobbery kisses.
“Thank you bud,” he said, patting the dogs head.
He slipped his fingers below its collar and moved back towards the woman.
Erik got back to the shore, collapsing in the sand in front of the woman. The dog returning to her owner. She knelt beside him, rubbing his side.
“What’s going on? Why are you fully clothed” she asked.
He didn’t respond. He figured the question was rhetorical.
“Is there someone I can call?”
He looked up at her. He could tell something about her. It was in her eyes. Erik had seen the look before, in himself. She was broken like him.
“What’s your name?” Erik asked.
“Jackie,” she said.
Erik held out his hand.
“Erik.”
Jackie shook it with a slight smile.
Erik sat up, looking up to her. Then to the dog.
“Your dog here might have just saved my life,” he said.
“Mine too,” Jackie smiled.
Erik held out his hand and the dog came. He rubbed it the brought his face to it.
“What’s his name?” Erik asked.
“Remmy,” she said.
“Remmy. I like that name,”
Erik stood up so he could see Jackie eye to eye.
She brushed the sand off his face.
“Can I take you to get a change of clothes? Maybe get you something warm to eat or drink?” she asked.
Erik smiled for the first time in a while.
“I’d really like that.”
Sean is from Detroit, Michigan. In his spare time, if he isn’t skateboarding, he is writing short films or is working on writing his second feature length film. He is also in the process of writing a graphic novel. Find him on Twitter @SeanPFish