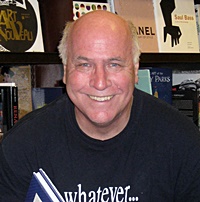 Jake drove his Saturn toward the better part of town while Dayna and Lauren talked in the backseat, illuminated by the overhead light.
“Let me see your nails,” said Dayna.
Lauren pushed out her hands from the billowing sleeves of her robe.
“Perfect,” said Dayna. “Now you’ve got the fingers of a woman, not a Brownie Scout.” She opened the family Bible. “Before we get there, I want to read you a little something.”
“You?” said Lauren. “Scripture?”
Dayna cleared her throat. “‘Let him kiss me with the kisses of his mouth: for thy love is better than wine…’”
“Song of Solomon.”
“Just trying to put you in the proper mindset. Now where’s Jeremy’s bedroom?”
“Facing the pool,” answered Lauren.
“Good. Go through the side gate. Sit on the edge of the pool and splash the water with your toes as loud as you can. And then when you see him peering out at you, stand up and let the gown slip slowly down your body. Then ease yourself into the pool. If his window starts to fog, that’s a good sign. Jake and I’ll wait in the car fifteen minutes…and if you’re not back, we’ll figure Jeremy’s a healthy hetero.”
“This is SO embarrassing.”
“Not as embarrassing,” said Dayna, “as explaining to people why your husband climbs in the sack with pot-bellied truck drivers.”
Lauren sighed. “And then what do I do if he fogs his windows?”
“Jeremy’ll come outside in his pajamas or maybe his boxers,” said Dayna. “When he’s right next to you, tell him that the Lord commands him to approach your palm tree and take hold of the boughs…”
“Mom…”
“And let him see your breasts are like clusters of the vine.”
Lauren frowned. “But how am I gonna know if he’s attracted to girls?”
Jake turned toward them and said, “By then, it should be obvious.”
Lauren asked, “What if it isn’t?”
“Then you’re gonna need a new boyfriend.”

Lauren was creeping in the darkness along the side of Jeremy’s house when she was stopped by the sounds of splashing and laughter. Then two voices. Jeremy’s tenor and…and … Cindi’s alto. She tiptoed forward and peered at the kidney-shaped pool, steaming and lit only by underwater lights.
Cindi was standing in the shallow side, keeping dry her pile of platinum hair. Jeremy was floating on his back…and he was naked. Now that her eyes adjusted, Lauren could see that Cindi was naked too.
Lauren strode forward. “Is this how you prepare your Sunday school lessons?” Her voice quavered. “Or are you baptizing each other?”
Jeremy pushed his legs underwater and popped up his head. “Lauren!”
Cindi laughed hoarsely. “Is this the girl with the fingernails? Let me see your flowers.” She laughed again. “Now I recognize you. You’re in the pageant.”
“She’s Mary,” said Jeremy.
“Which Mary?” asked Cindi.
Lauren crossed her arms and recited scripture, “‘…and the nakedness of thy whoredoms shall be discovered.’”
Cindi smiled smugly. “‘Who told thee thou wast naked? Hast thou eaten of the tree, whereof I commanded thee.’”
“Are you suggesting I’m…,” said Lauren, pointing at herself, “…the serpent in the garden?” She glowered at Jeremy. “Shouldn’t you just play Judas instead? You’re already immersing yourself in the role. Talk about Method Acting.”
“Aren’t you the clever one,” said Cindi.
Lauren asked weakly, “Couldn’t you at least wear fig leaves?”
Cindi lifted her shoulders out of the water, displaying huge implants that swung as if attached to gyroscopes. “And cover these gorgeous…?”
“Lauren, go home,” said Jeremy. “We’ll talk later.”
Lauren arched an eyebrow. “When? At church?” She hurled her “True Love Waits” bracelet toward the deep end and walked away, swirling her robe.
“I’m sorry,” Jeremy shouted after her. “I didn’t invite Cindi. She knocked on my window!”
Out of their sight, Lauren stopped in the darkness along the house. She clenched her jaw and pulled the rainbow bag out of her robe. First she cut and filed her fingernails into sharp points. Then she brushed them with a combination of black and white to produce a steely gray. And then she strode toward the pool.
“Our prodigal daughter returns,” said Cindi.
Jeremy sighed. “Lauren, please…”
“Which Mary?” shouted Lauren from the dichondra. “Which Mary! Which Mary! Who wants to be a Mary? I want to be a Roman soldier…”
“What?” asked Cindi.
“A centurion at Calvary!” She pointed at Jeremy. “And you’re the impenitent thief!”
Jeremy stammered, “I…”
Lauren opened her mouth wide to inhale draughts of chlorine-scented air, and ran faster and faster in a circle around the pool. Cowering in the water, turning to follow Lauren’s sprint, Cindi and Jeremy extended their hands to protect themselves.
Once she had gained enough momentum, Lauren stretched into a dive and guided her sharpened nails into Jeremy’s soft palms. At this crucifixion, Cindi let out a shriek that caused a neighbor to phone 9-1-1.

#
Orman Day’s life has been shaped by a wanderlust that has been both a curse and a blessing. He’s thumbed on six continents, , visited with cocaine-smoking gringo inmates in their Bolivian prison cell, bungee jumped off a New Zealand bridge, witnessed a sky burial in Tibet, hopped freight trains from Los Angeles to New Orleans for Mardi Gras, and canoed the Mississippi during a two-month voyage at age 56.