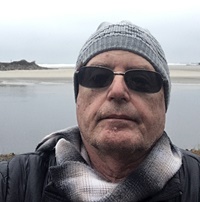 “Do you mind if I sit down?”
Although, nursing a drink, the woman sitting at the bar did not stir, the man proceeded to plop himself down on the adjacent stool. “Hi, I’m Kit Evans,” he introduced himself.
The woman made no sign that his words had registered.
“Can I buy you a refill?” the man offered. “Bartender, can you give this smashingly gorgeous creature another drink?”
The bartender, a thick shouldered hulk with a ruddy complexion, who didn’t appear to be a day older than thirty, gazed over. With these two stragglers the last of the younger set lingering in the place, this fellow was obviously taking the last scrap to hit on. “Dude, I appreciate the business, but I think the lady’s already had her share.”
Kit Evans smiled equitably. Taking out his billfold, he removed a twenty dollar bill. “Why don’t you bring her that drink and keep the change?”
“Coming up,” the bartender shrugged.
In a few moments, the bartender returned with the drink and set it down on a house napkin, removing the twenty dollar bill. “It’s a Seven and Seven. Her name by the way is Nelly.”
Kit Evans waited until the bartender had resumed his former position to return to his come on. “Well Nelly, you were sitting all by your lonely self so I thought that you can use someone like me to brighten up the evening.”
The woman called Nelly continued to stare listlessly at her drink.
Nonplussed, Kit Evans edged his stool closer. A financial representative at Allegiance’s Danvers location, it had been one long day. On the phone pressurizing would be customers with the standard spiel had not been without grinding stress. Nowhere near his quota, he had a lot to blow off. As it happened, hooking up would be the perfect tonic. “What shall we drink to?” he raised his glass.
Finally showing some sign of life, Nelly lifted herself off the stool. It took her a few moments to balance herself when she got to her feet. Not paying her courter any mind, she lurched off in the general direction of the facilities. When she had made her way safely out of sight, the bartender strolled back over. “I might as well tell you that you’re not going to get anywhere – not with Nelly.”
“Oh forgive me! I didn’t know that you were the resident gatekeeper.”
The bartender grinned solicitously. “Look, do as you please. Just a word to the wise: you’re wasting your time.”
“Just out of curiosity, how do you figure that?”
“If you have never seen a totally broken hearted loser in a romantic attachment, now’s your golden opportunity.”
“Nelly-heartbroken?”
“The same. You see Nelly got the sack by the dude she planned on marrying…some Bantu buck from Zanzibar.”
“Zanzibar?-Where the fuck is Zanzibar?”
“You didn’t do well in geography section, either. Zanzibar’s in Africa somewhere.”
“Whoa! She was going to hitch up with a black skinned, spear carrying savage?”
“Look, when you reach the age of 35, and all your girlfriends are already married and have kids, you take what you can get. A surfing instructor from what I hear, he was 10 years younger, too.”
“Wait just a moment! This story sounds implausible. How’d they ever meet?”
“She went to Zanzibar-wherever that is-on a teacher trip that was supposed to last only 10 days. She wound up staying over a month.”
“Shit! Did she come to her senses?”
“She did when she discovered that her future matrimonial partner already had not one, but two wives. As it turned out, the asshole mercenary was only after her for the entry papers… What a hard luck story for her! By all accounts, she truly loved him-or believed she did.”
Unsteady on her feet, Nelly was careening back from the lavatory. A full figured woman, there was no mistaking the utterly plaintive look on what normally would be a most fetching face. Arriving at the bar, she picked up the fresh Seven and Seven and gulped it down. Placing the drained glass back on the bar, she placed her hand suggestively over Kit’s. “Can you give me – a ride home?” she got out.
“Sure, sure,” Kit Evans at once agreed, lighting up. Taking the last sip of his own Perfect Cosmo, he stood up. Nelly clasped him under the arm. “I guess that you were wrong this time around,” he winked at the bartender, very much agog over this pleasant stroke of good fortune.
The bartender remained stationary as the couple walked off together. When they were out the door, he peered about. There was only one middle-aged foursome remaining at a table. Twenty minutes before closing time, in a little while they would have to clear out, too.
Figuring that he may as well start wrapping it up, there were the lemon peels to dump, the olives and maraschino cherries to put away, the glasses to put on the racks-the usual odds and ends. At one, he’d begin cashing out. When the waiting staff forked over 10% of their tips, he estimated that he’d net a clear hundred and fifty non-taxable dollars. After helping himself to a complimentary shot of Johnny Walker Black out of the manager’s sight, he’d hop into the leased Wrangler Jeep and head back to his crib. He had that league soccer game over at D & R Sports Arena in Topsfield to get ready for the next afternoon.
Nothing really untoward had taken place during this evening’s shift. There had been no loudmouths, no one he had to muscle out, no suspicious underage drinkers he had to card. Altogether speaking, it had been another night in a nice, clean place.

Robert Gamer currently resides in Danvers, Massachusetts. Learning from such masters as Chekhov and Turgenev, he is working on a novel. When not writing, he continues to push for protecting the environment and fixing the immigration system.