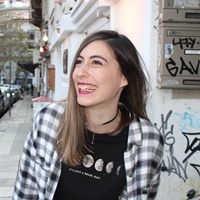 One. You never say thank you or please, and
You hate everything that’s breathing.

I discovered it since day One, of course, and
soon I found out it wasn’t true. You have thanked
me once, though, and even though I know You love me,
let’s say You simply don’t hate me.

Two. You make everything about You. You are the creator
of a world that is surrounded by You and your magnificent superiority.

You have degraded me more than once, underestimated me, and yet,
I never gave a damn. You don’t know me that well, mister, so I
am not interested in your opinion of me.

Three. You play a role for the world. You’re witty, outspoken,
You share every detail about your life, things You shouldn’t
have told a soul, but there You are, exposing yourself,
forcing us to buy an image of You, but not your real self.

Not me, though. I never bought the lies You told others
to push them away. I somehow knew the core of your soul
from the first time we exchanged two words. Familiarity; I hate it.

Four. I hate You carry symbols of the person that broke you
on your skin forever. I hate it because I can’t stand the
idea that any human being is incapable of becoming better, of healing.

Because if you don’t believe it either, then what about me
and my lectures on self-help?

Five. You are such a baby. You moan and cry to everyone when
things don’t go your way.

Six. And now that we’re halfway through, are there even ten things
I hate about You?

Eirini Anastasiadou (Erin Nust) is a fiction writer and editor, and former ESL teacher based in Nottingham, UK. She has a BA in English Literature and Linguistics and she’s currently working on her novel.

COMING OUT by Chris Arnone