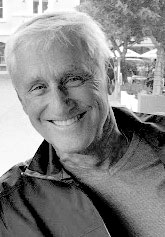 1.Tell us a bit about yourself – something that we will not find in the official author’s bio?
During WW II, my father was in the US army air force, stationed at Alamogordo Airfield (now Holloman Air Force Base) in New Mexico. Many German Afrika Korps prisoners were interned nearby. My first birthday cake was baked by one of those prisoners, a former chef at a fine Leipzig hotel.
I was present at the birth of the nuclear age. When in July 1945 Robert Oppenheimer’s “gadget” was tested at Trinity Site, a remote desert location in southern New Mexico, I was asleep in my crib in Tularosa sixty miles away. The detonation of the first atomic bomb caused a great flash like daylight and a tremor that shook our house, causing my parents sleepily to wonder if I’d fallen out of the crib. The military cover story afterwards was about the explosion of an ammunition dump. Three weeks later the atomic bombs were dropped on Hiroshima and Nagasaki.
2. Do you remember what was your first story (article, essay, or poem) about and when did you write it?
I’ve written for nearly as long as I can remember. Probably my first story was written when I was 16 at the seminary in Santa Barbara. I was very much taken with Salinger’s “The Catcher In The Rye”, and decided to write a seminary version of that masterful description of adolescent confusion and ennui. It apparently didn’t sit well with the friars in the faculty and no doubt contributed to my dismissal some months later. I always had difficulty submitting to authority. They must have known that and decided they didn’t need another Holden Caulfield. Even so, I valued my time at St Anthony’s where I had a fine English teacher who sparked my love affair with words.
3. What is the title of your latest book and what inspired it?
The book is “Searching For Noriko”, my first novel. It was inspired by the real life experiences of two uncles, my mother’s brothers, US soldiers who were captured by the Imperial Japanese Army on Bataan in the Philippines in 1942. Theirs was a heroic story, rich in family legend. Miraculously they survived over three years of brutal captivity which included the infamous Bataan Death March, and came home. While the novel isn’t about them, the germ of a story that covers nearly 60 years had its origins there.
4. How long did it take you to write your latest work and how fast do you write (how many words daily)?
I regret that I am not what you’d call a disciplined writer. The Noriko novel began as a personal dare, and it took four years to bring to fruition after many rewrites and a major restructuring.
My days are not structured. I don’t rise at a certain time and count hours or words in front of my keyboard. I am episodic, based on ideas or inspiration that may occur at any time. In those moments I am quite productive, sensing the need to put thoughts to print quickly. But as I’m finding my stride as a writer I believe I will push work out more efficiently with the benefit of lessons learned with Noriko.

5. Do you have any unusual writing habits?
I don’t know if it’s a “habit”, but my forte is storytelling. I can spin a story, sort of stream of consciousness, out of a fertile imagination. Stories come easy to me. Just ask my kids. The craft of writing a story is something I’ve had to work at. And I’ve had some fine teacher/coaches, people who showed me how best to express those sometimes inspired ideas of mine artistically in print.
I like writing fiction. There’s a certain freedom in that. The plausibility of a story set in a certain time and place requires research and its own sort of discipline, but there is freedom—maybe even license—to rewrite history to a degree so long as the plot is plausible. Just look at dystopian alternate histories like Philip Roth’s “The Plot Against America.” And there’s nothing quite like inventing characters to whom you can give life, looks, loves, hates and habits. It’s like an act of creation. They become your people.
And as far as “unusual” is concerned, I guess the fact that I don’t do elaborate plot outlines or chapter structures with scenes to be filled out later may fit the bill. That is not how I roll. Or maybe I’m just lazy. I begin a story not actually knowing how it will end. My plot evolves with the story, and it can take many turns before it reaches resolution.
6. Is writing the only form of artistic expression that you utilize, or is there more to your creativity than just writing?
I suppose you could include a brief period in my youth when I played clarinet. But that ended abruptly when I went to high school. Clarinet seemed rather not the macho image I wanted to project. I once did write some poetry, but it was at a dark time in my life and writing poetry was a sort of catharsis. The poems are wrenching still. I don’t revisit them.
Would you consider tennis an artistic expression? I suppose you could if I were Roger Federer, but at my age that is quite unlikely. I was a competitive gymnast while at university. The artistry of that sport probably exceeds that of most others, combining amazing strength, agility and dance. Alas, that was many years ago and it is a form of artistic expression that requires the nimbleness (and fearlessness) of youth. Not in the cards, so writing remains my one creative outlet.
7. Authors and books that have influenced your writings?
I love the style and storytelling of Herman Wouk, Tom Wolfe and Leon Uris. James Michener became an idol for a time. Roddy Doyle has done much I admire. I suppose I’d have to say Tom Wolfe is the one I’d most like to emulate.

8. What are you working on right now? Anything new cooking in the wordsmith’s kitchen?
Actually, yes. There are some who have suggested possible sequels to “Searching for Noriko”, and I may pursue those ideas later. But right now I have two novel projects underway. One is a thriller involving a crusading prosecutor fighting the drug cartels in the southwest. The other is more of a detective story involving a priest who several years after his death is accused by three people of sexual abuse that occurred years earlier. These projects are in the earliest stages.
9. Did you ever think about the profile of your readers? What do you think – who reads and who should read your books?
Of course. Most writers have a canny eye on the prospective purchaser/reader. I will write primarily for those who have some life experience, not children or young adult readers. I believe most people who buy books today are women, willing to spend the time to become engaged in stories with romance, family, stress of relationships and some sense of history. I originally considered that men would be my best audience but realized that I wasn’t going to be a Lee Childs-Harlan Coben writer type. I could write action thriller and military type works, but they don’t interest me as much as the human emotions and interactions of everyday people, posited in a familiar historical context.
10. Do you have any advice for new writers/authors?
That seems presumptuous for someone who is a new author himself. But here goes. Don’t become discouraged. Writing isn’t easy although many non-writers would have you think so. Don’t be afraid to rewrite. Good writers will tell you that they constantly rewrite. Understand your strengths. There are storytellers and writers. Storytellers can invent a narrative complete with elaborate plot twists. Writers are usually the craftsmen who have the talent to put those stories into the words that become art. If you can’t become both a storyteller and a writer, work hard on developing one or the other.
11. What is the best advice (about writing) you have ever heard?
Several bits of advice: 1) a work is never really finished. It can always be improved. Don’t settle for a first or even second or third draft; 2) seek advice from good writers. Most are happy to share; 3) in fiction limit your viewpoints to an essential few characters. And 4) find a good editor.
12. How many books you read annually and what are you reading now? What is your favorite literary genre?
It varies, depending on what I have going on in my life, like writing. I try to read four or five books a year, sometimes reading two simultaneously. I am currently re-reading “Personal Memoirs of Ulysses S. Grant”, a great book written by Grant while he was dying of throat cancer and published with the aid of Mark Twain in 1885. As literary genres go, I most enjoy historical fiction that concentrates on the 19th and 20th centuries. Memoir and biography are also high on my list of preferences.
13. What do you deem the most relevant about your writing? What is the most important to be remembered by readers?
I try to tell stories that recognize opposing points of view. I shun the sharp lines demarking issues as black or white, preferring to delve into the world of grey where I find most of life resides. In Noriko, for example, there are two sides to the story of the Pacific war and its aftermath. There is the Japanese side of the story as well as the more familiar American side. I think it is necessary to be fair to both sides, recognizing the strengths and failings of both as I move the characters toward a conclusion. There are heroes and bad guys on both sides where powers beyond their control drive them to deeds both good and evil. Reality requires that recognition.
14. What is your opinion about the publishing industry today and about the ways authors can best fit into the new trends?
I don’t claim to have any important opinions about publishing today and how authors should adapt to new trends. For the new author the task of securing an agent can be extremely daunting, with much frustrating trial and error. And the chances of selling a manuscript directly to a major publishing house are slim to none. Few literary agencies are willing to spend capital on an unproved writer. So after sending hundreds of queries to literary agents without a nibble, many new writers now resort to self-publish, with varying degrees of success. I was fortunate that Adelaide Books took a chance with me and “Searching for Noriko”.
That said, one must play to one’s strengths and avoid the temptation to go with the herd , trying to write in the genre du jour. If you are a memoirist, best stay away from sci-fi or children’s books, even though they may be currently selling better than memoir.